Transparency is one of the cornerstones of the U.S. stock market. By requiring publicly traded companies to disclose their finances, legal conflicts, executive compensation and other details, the system deters wrongdoing, encourages management competence and assures that investors compete on a level playing field.

At least, that’s the theory. But does this principle always work as intended?

Clearly, it doesn’t work perfectly every day, as companies are frequently caught fudging or concealing vital information. But even when the rules are followed, the practice of revealing details sometimes runs counter to the firm’s and shareholders’ best interests.

That’s the conclusion of new research by Wharton finance professor Alex Edmans and accounting professor Mirko Heinle, and their colleague Chong Huang of the University of California at Irvine. Their paper, “Optimal Disclosure When Some Information Is Soft,” describes how an imbalance between the disclosure of “hard” versus “soft” information can lead a chief executive to focus on short-term corporate performance at the expense of the long term.

“It’s not the case that all information is good and we should just rush to maximum disclosure,” Edmans notes. Previous research in this area has generally assumed that all types of information are easily disclosed, and that the cost of disclosure is limited to the minimal expense of preparing and mailing documents. But the researchers’ paper shows that the actual cost may be much greater than the direct expenses associated with communicating information: Disclosure can distort the manager’s investment incentives. The source of this incentive effect is that, in real life, some types of information are easier to reveal than others.

“It’s not the case that all information is good and we should just rush to maximum disclosure.”

“Hard” information includes easy-to-measure data like revenues and sales, net profits and the value of assets owned. “Soft” information is more difficult to quantify, involving intangibles such as the value of research and development, employee training and morale. Though it is difficult to measure how a dollar invested in a soft activity will affect the bottom line, there is little doubt that a company that never makes soft investments will suffer down the road.

For the firm, this poses a dilemma. Imagine, Edmans says, a CEO sitting on $1 million in cash. Spending it on research or employee training might be good for the firm in the long run, but it will have no short-term effect on the company’s value to shareholders. Not spending it, on the other hand, would lift reported profits by $1 million, perhaps raising the share price.

For a given firm, there is an optimal balance between these hard and soft uses for resources. If neither hard nor soft information needs to be disclosed, the CEO can make the optimal investment choice. But, if rules force the disclosure of hard information, such rules give the manager an incentive to tip the balance toward hard investments at the expense of soft.

“Since rules can only stipulate the disclosure of hard information, and not soft, they change the relative weight of hard information versus soft information,” Edmans says. “Then managers are going to take actions to boost earnings at the expense of long-run intangible value,” he adds, noting that executives have a tendency to manipulate any piece of information subject to disclosure. Previous research by others found that 78% of executives would sacrifice long-term value to meet earning targets.

In theory, the capital markets like disclosure because it gives a clearer view of risks, so more disclosure should reduce the company’s cost of raising cash. Academic research has also noted that greater disclosure reduces the individual investor’s cost of research, making investing more efficient and drawing more players into the game. In addition, greater disclosure improves price efficiency – in other words, narrowing the swings in price commonly seen when investors, uncertain about what’s really going on, flip flop between exuberance and despair. Greater disclosure, therefore, causes share prices to more accurately reflect a firm’s true value, and that accurate pricing encourages executives to invest more of their own wealth, giving them a stronger incentive to perform well.

But most of these previous analyses apply only to hard information – that which is quantifiable, verifiable and easy to disclose. For example, the researchers write, “a firm can credibly communicate its earnings, but not the quality of its intangible assets such as its human capital, corporate culture or R&D capability.” Yet research has shown these “intangibles” to be “particularly important in the modern firm.”

Intangibles, for instance, would be key to the success of a software firm, but perhaps not as important to an old-time manufacturing firm churning out the same product year after year, Edmans says. There is no single optimum balance between hard and soft information, because that level will be different for various firms and industries. But the importance of soft information, such as research and development, will generally be greater for technology and other firms that must constantly break ground, he points out. Hence, firms in the software, Internet or pharmaceutical industries are likely to suffer the greatest distortion from regulations that force disclosure of hard information.

“With anything, there are tradeoffs, there are costs and benefits…. Nothing is ever black and white.”

“One might think the existence of soft information is completely moot. If some information cannot be disclosed, just disclose as much information as possible — just ignore the soft information because you cannot do anything about it,” Edmans says, explaining a common rationale. However, “the world is more complex than that. With anything, there are tradeoffs, there are costs and benefits…. Nothing is ever black and white.”

A model built by the three researchers assumes that if no disclosure were required, the manager could find the optimal balance between hard and soft investments with relative ease. With disclosure requirements imposed, the balance tilts toward hard investment because that is easier to report. According to the researchers, this imbalance might be corrected by reducing the amount of hard disclosure, but that path is typically closed.

“Even if a low disclosure policy is optimal to induce investment, the manager may be unable to commit to it,” Edmans and his colleagues write. He adds that “any increase in hard information will distort the manager towards making short-term investments” — even if that is counter to the firm’s long-term interests.

Financial regulation tends to focus on hard information like revenues and earnings, contributing to the imbalance between hard and soft disclosure, Edmans notes. In theory, regulations could be rewritten to address this, but that would conflict with the common view that more information is always better.

Since the pressure for ever-greater disclosure is unlikely to be reversed, the chief benefit of this new research will be a better understanding of the biased view created by a hard/soft imbalance, according to Edmans. Firms can react to this insight by redoubling efforts to better explain what they are doing on the soft side, and to redress the imbalance by limiting hard disclosure when possible. The researchers recall that at the time of its IPO, for instance, Google announced it would no longer disclose estimates of future earnings, stating that “we believe that artificially creating short-term target numbers serves our shareholders poorly.”

Investors and regulators can use the research to better understand the limitations of the corporate filings on which they rely. And lawmakers and regulators, Edmans says, can use this new understanding in fine-tuning disclosure requirements. “When policymakers are thinking, ‘Do we want even more disclosure?’ they should think, ‘Well, there is a cost to that.’”

Optimal Disclosure When Some Information Is Soft 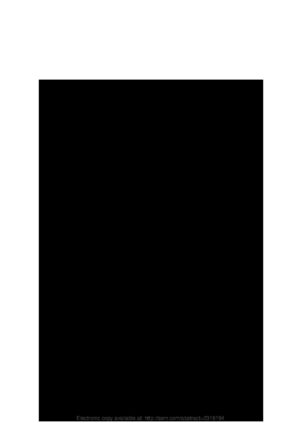