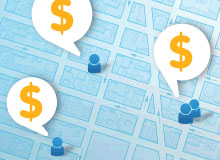 Mobile technology has presented marketers with a new and entirely unique opportunity, says Martin Spann. It could be a hugely lucrative opportunity, too.

“The smartphone is a location-based service,” notes Spann, a professor of electronic commerce at Ludwig-Maximilians University (LMU) in Munich. “And that means you can integrate the online world with the offline world.”

In other words, says Spann, smartphones have done more than just allow users to remain fully engaged with the virtual world while out and about in the real world. They’ve also allowed companies to reach those users at pretty much any time of the day, no matter where they are. As a result, “location-based” marketing campaigns have become increasingly common, and recently, Spann set out to discover just how profitable those campaigns can be.

With funding from the Wharton Customer Analytics Initiative (WCAI), Spann studied the effectiveness of a German smartphone app that delivers customized coupons to users, based entirely on their location. He shared the preliminary conclusions of this study during a presentation at WCAI’s recent conference, “Marketing on the Move: Understanding the Impact of Mobile on Consumer Behavior.”

“The whole purpose of the study was to find out what kind of impact such mobile, location-based advertising could have in the broader picture,” according to Spann, who serves as director of LMU’s Institute for Electronic Commerce and Digital Markets. “We wanted to look and see how these efforts actually affected user behavior, as well as what factors drove that behavior — pricing, the discount offered, distance from the retail location or even time of day. That’s the goal for the study — to figure out, ‘What can be done with this kind of approach?'”

At the very least, Spann believes he has an answer to that last question: Plenty.

Even though mobile targeting techniques are in their infancy, Spann says, the results of his study confirmed his notion that mobile couponing does indeed work. The data showed that when marketers caught their audiences at the right place and at the right time with the right coupon, they were able to directly influence consumer behavior, increasing the likelihood of both store visits and purchases. Spann is currently working on a paper about the study, which he hopes to publish soon.

“The major conclusion is that location-based coupons do have a strong impact on behavior,” he says. In fact, Spann predicts that such programs could prove to be even more effective in years to come — provided companies and marketers gain access to the right data, and know what to do with it.

While the broad conclusion of the study was fairly straightforward — that these campaigns do deliver on their promise — there remain many more questions to answer, and details to sort out. Spann notes that his study showed that numerous factors beyond just “distance from store” ultimately played into a consumer’s decision to use — or not use — a coupon offer. The order in which the coupon was presented by the app was an important factor, he says. So, too, was the time of day when the coupon was delivered, the number of conditions attached to each offer and, of course, the value of the deal offered.

Taken together, the evidence suggests that if mobile marketers want to improve their hit rate going forward, they need to get a better sense of the power of each of those contributing factors, as well as how each those factors interact.

For instance, Spann himself wondered how much of a discount would have to be offered in order to lure in a customer for every kilometer they were removed from the retail location. After combing through the data, he came up with the answer: approximately 10%; or, put another way, a 1% discount for every 100 meters.

It’s an important piece of information — and certainly not the last one that will be sought in what figures to be an ongoing quest to understand the bottom-line power, and limitations, of targeted mobile marketing.