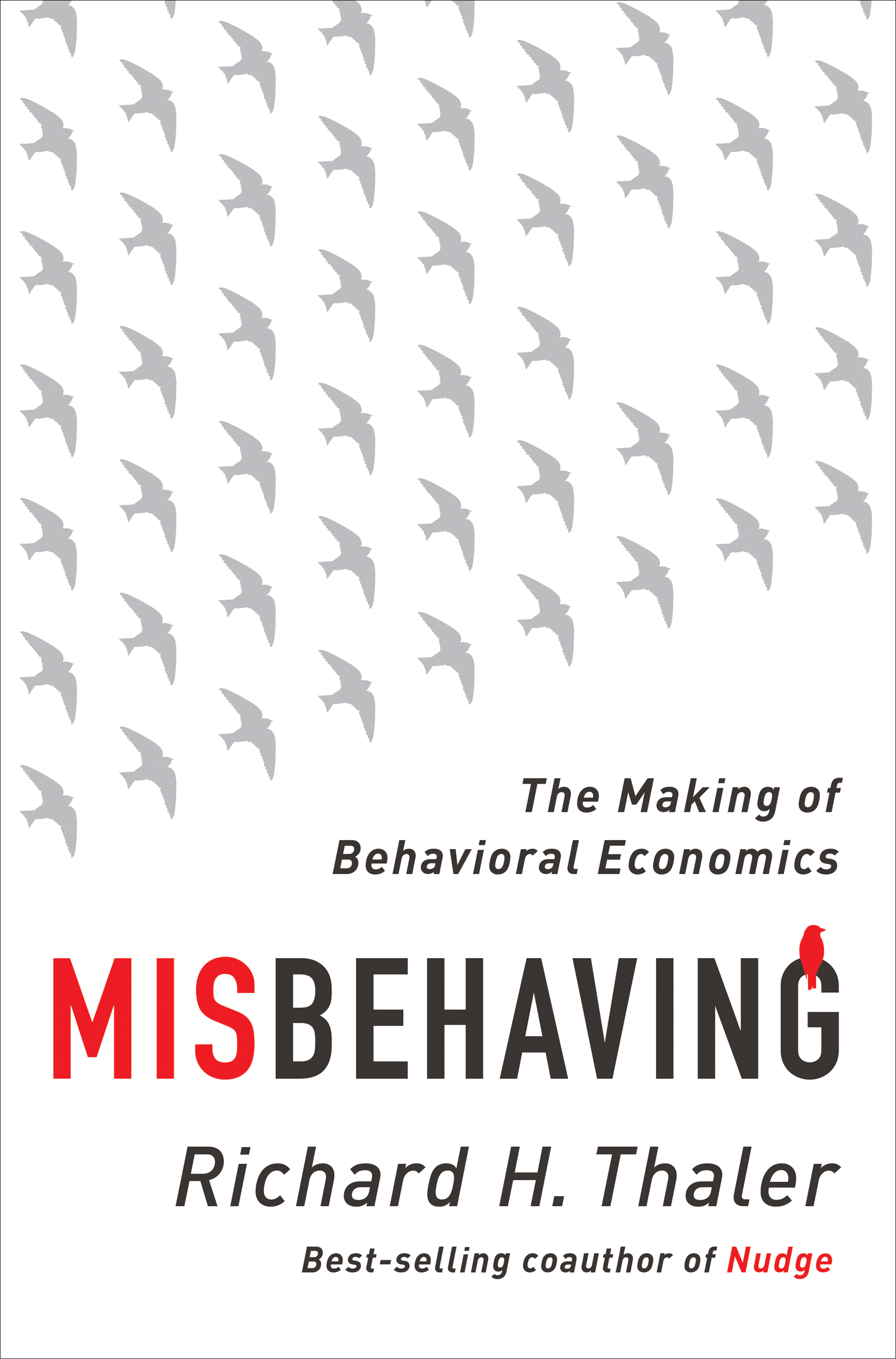 In the new book Misbehaving: The Making of Behavioral Economics, Richard Thaler, coauthor of Nudge and a behavioral science and economics professor at the University of Chicago, recounts his struggle to change the way traditional economists look at the impact of human psychology on economics. Wharton operations, information and decisions professor Katherine Milkman recently spoke with Thaler about why he wrote the book, where behavioral economics has had the most impact, and which decision-making bias he would remove if he had a magic wand.

Katherine Milkman: When we chatted recently, you told me that the book you originally pitched when you began the journey of writing this in no way resembled the book you actually wrote. How did the book you pitched morph into Misbehaving?

Richard Thaler: I have an agent, John Brockman, who is an agent to many academic authors like Dan Gilbert and Steven Pinker, and he’s very good at conning academics into writing books. He pulled this trick on me. The book I was intending to write, the title was Snags. The idea was stuff we would trip on. I thought of it as a prequel to Nudge, using my George Lucas [Star Wars creator] strategy of writing things backwards.

The problem I had was I worked on it off and on for a couple of years, and the book had no spine. It had no organizing principle, unlike Nudge, which had really two core principles. One was libertarian paternalism and the other was choice architecture, and those held the book together. Snags was a collection of things that I found interesting. I stumbled around for a while and then I consulted with some of my friends who are professional writers, like Michael Lewis, and he encouraged me to try to write the book in the way I did, which was structured as more of a memoir. But it’s just a sneaky way of talking about behavioral economics and telling a lot of stories.

Milkman: I think it works beautifully…. One of the things I wanted to ask you about is what you think the most important lessons are for business readers.

Thaler: The book is really a story about disruption. I had an idea 40 years ago that there might be another way of doing economics, and it was a very subversive idea. I had to try to figure out a way to get tradition-bound economists to take my idea seriously and then to corrupt young people like you into carrying the flag. Lots of businesses are in the situation I was in 40 years ago. It’s not that I have a recipe, but I think it’s always good to read about somebody’s struggles and the mistakes they made along the way and some of the success — of what, why and where.

But of course, what the book is really about is the field of behavioral economics and the evidence that supports it. I use the same terms that I used in Nudge, which is humans and “econs,” and the idea is that standard economics has this mythical creature, “homo economicus” that I call an econ for short, and nobody’s ever met an econ. Even economists aren’t econs. So these econs are super smart, have no emotions, no self-control problems. They go to the gym exactly the right amount of times. They drink exactly the right quantities and never binge on chocolate or booze and save exactly the right amount for retirement and so forth and so on.

They are also complete jerks. They would never leave a tip at a restaurant they don’t intend to go back to. Those people are fictional creatures, and I wanted economics to be about real people. The lesson for businesses is you are dealing with real people. Those are your customers, those are your employees, those are your bosses, and the better you understand how real people tick, the more successfully you will be able to accomplish your goals.

“The book is really a story about disruption. I had an idea 40 years ago that there might be another way of doing economics.”

Milkman: This book is really the story of successfully changing the way a lot of very smart, confident, stubborn people — traditional economists — see the world. I’m curious if you have any thoughts based on that about some of the most important transferrable lessons you’ve learned about how to convince colleagues what they’re missing and need to change their views.

Thaler: The truth is that I don’t think I’ve changed anybody’s mind or, if so, it’s a very small number of people. Even the people who have changed their minds won’t admit they have changed their minds. As I alluded to earlier, my strategy has been to try to — I sometimes say, corrupt the youth — get young people interested in the fields who don’t have a vested interest in the way things have always been done. There’s a reason why start-ups, especially disruptive start-ups, like Google or Amazon or Uber, are full of young people. That’s because young people are not as wedded to the old fashioned ways of doing things. In some ways, I succeeded by not trying to change everybody’s minds, but by recruiting others to help build up a body of evidence. But the second answer would be in the end, the only thing that convinces anybody is data. So there were lots of excuses economists made for continuing with their ways.

My friend {Harvard economist] Matthew Rabin sometimes refers to these as “explain-away-tions” — which is a great line. They would say, “Okay, people make these mistakes in the lab, but if you raised the stakes, then everything is going to be fine.” Then we’re still emerging from a crisis that was caused by essentially everybody making mistakes about mortgages — lenders, borrowers, people who were securitizing loans. High stakes don’t make people smart. If there’s one important lesson from behavioral economics, it’s that. People make just as many mistakes when the stakes go up, maybe more.

Milkman: At the end of the book, you spend a little bit of time talking about where behavioral economics has had the biggest impact and why you think that is. I was particularly interested to learn that you felt behavioral economics has had the biggest impact on finance, where the stakes are extremely high. I was wondering if you could explain to our audience why you think that’s the case.

Thaler: The reason is that finance has a combination of two things that made the debate more interesting and more focal. One is fantastic data. We have daily prices on stocks, going back to 1926 in the U.S. and other countries around the world, and we have theories, which make precise predictions. Many of those predictions turned out to be false.

It was possible to generate studies that just were right in your face. You say the following thing cannot happen, and it happened. In the academic field of finance, I think that’s why the field succeeded. There’s another part of finance where the field has had a big impact, and that’s in the design of retirement savings plans, like 401K plans. Here, it was basically taking the principles of behavioral economics — we’re dealing with humans — and then using what my friend Danny Kahneman calls “first grade psychology” to improve the plans, to incorporate things like automatic enrollment or what I call “save more tomorrow,” which is giving people the opportunity to commit themselves now to saving more later, like when they get the next raise, defaulting people into sensible investment plans. My mantra is, “If you want to help people, make it easy.” We’ve made a lot of progress in 401K plans on making them safe for humans.

Milkman: I posted a call for questions to ask during this interview on Twitter, where you’re very active, and … I got lots of great suggestions. One was actually a repeat of a question that your friend, Danny Kahneman, a Nobel Laureate and behavioral economist, answered recently during an interview. He was asked, “What’s the behavioral bias or reliable error made by decision makers that you would remove if you had a magic wand?” Danny answered, “Overconfidence,” and his answer was widely discussed in the Twittersphere and the blogosphere. The question that I was asked to ask you is the same one. What bias would you remove if you had a magic wand?

Thaler: It’s never a good idea to disagree with Danny. I think that would also be at the top of my list. Let’s add some related biases that contribute to overconfidence, like the confirmation bias. One of the reasons we’re overconfident is that we actively seek evidence that supports our views. That’s true of everybody, that’s part of human nature, so that’s one reason we’re overconfident; we’re out there looking for support that we’re right. We rarely go out of our way to seek evidence that would contradict us. If people want to make a New Year’s resolution, it should be to test their strong beliefs by asking what would convince them that they were wrong, then looking around and seeing whether they might find some evidence for that.

“The evidence for hindsight bias is overwhelming, and this has huge managerial implications.”

The other one would be a hindsight bias, a notion that was first introduced by Baruch Fischhoff, who was a graduate student of [University of Minnesota psychology professor] Paul E. Meehl. Hindsight bias is the [inclination to believe] that after the fact we all think things were obvious. Now, if you ask people, “What did they think 10 years ago was the prospect that we would have an African-American president before we would have a woman president?” People would say, “Oh, yeah, well, that could have happened. All you needed was the right guy to come along at the right time.” Or some people, of course, will say the wrong guy, but in any case…. In truth, no one thought that back then. The evidence for hindsight bias is overwhelming, and this has huge managerial implications because when managers evaluate the decisions of their employees, they do so with hindsight.

So some project failed and after the fact it’s obvious why it failed and it’s obvious that the employee should have thought of it. Whereas, before the fact, it wasn’t obvious to anybody; otherwise, we wouldn’t have done it. The advice I always give my students in dealing with hindsight bias is before big decisions, get everybody to write stuff down — including the boss — and agree on what the criteria are for good and bad decisions. That will help at least a little bit — after the fact — when things blow up. We’ll have it on record that nobody anticipated the fact that our competitor was going to introduce a better version of our great idea two months before the launch, and we had no way of knowing that was going to happen.