Solar energy could become price competitive with fossil-fuel energy sources in some U.S. cities within a couple of years, notes the website Energy Self-Reliant States. The first to hit the mark will be San Diego in 2013, followed by New York City in 2015. By 2018, several additional California cities are projected to join the ranks.

The Institute for Local Self-Reliance (ILSR), which developed the website, has created an interactive map showing by year which metropolitan areas would reach “solar grid parity,” meaning the costs for locally generated solar energy would equal the cost of grid electricity — traditional, remotely generated electricity delivered via transmission lines. “In just seven years, one in six Americans living in major metropolitan areas could lower their electricity bill by installing solar – without any incentives,” according to John F. Farrell, a senior researcher at the ILSR. Below is a static version of the map, showing the U.S. cities where solar energy will reach grid parity by 2027 and be able to serve 156 million people. 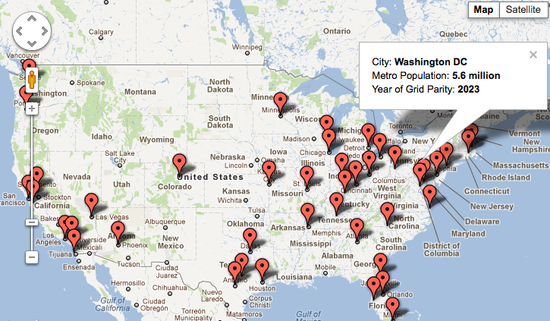 You can try the interactive version here.

The solar parity calculations are based on the following:

Solar will certainly be one important component of an array of energy sources in the future, says Eric W. Orts, Wharton professor of legal studies and business ethics. He agrees that solar energy is close to becoming competitive with coal-generated and other sources of fossil fuel energy in the United States. But the demand for energy is also rising rapidly worldwide, and that may simply make solar an additional, rather than a replacement, energy source. “Coal is still cheap in China, which is building a new coal plant every couple of weeks,” Orts notes.

Read more about the advance of solar energy in this recent Knowledge at Wharton Today article.

Is China’s Solar Industry Heading for an Eclipse?