There’s been dramatic shift in the country origin for World Cup sponsorship in recent years. A third of the top sponsors are now from China, versus none before 2014. Kalin Anev Janse (@kaanev), secretary general and also a member of the management board of the European Stability Mechanism, the Eurozone’s lender of last resort, explains how the changes mirror those in the world economy. (This article reflects his personal opinion.)

As a Dutch Bulgarian living in Luxembourg, I thought the 2018 World Cup would be a boring sports event. The three countries I identify with – the Netherlands, Bulgaria, and Luxembourg – played in the same group. So statistically I was hopeful that at least one of them would qualify. But somehow, not one made it to Moscow. From that group, only France and Sweden qualified. My only comfort is that the three are in the good company of Italy.

I contemplated watching other sports events this summer, such as Wimbledon, where Bulgarian Grigor Dimitrov is one of the favorites, or the Women’s Hockey World Cup, which the Dutch might win again. But then, you can’t ignore half of humanity: the World Cup is by far the world’s most-watched sports event, viewed last time by more than 3.2 billion people.

Then I found that watching the World Cup was also interesting from a financial point of view, because the same global shifts in capital markets and in macro-economics I am observing in my job are now becoming visible in how the sponsorship of this event is changing. 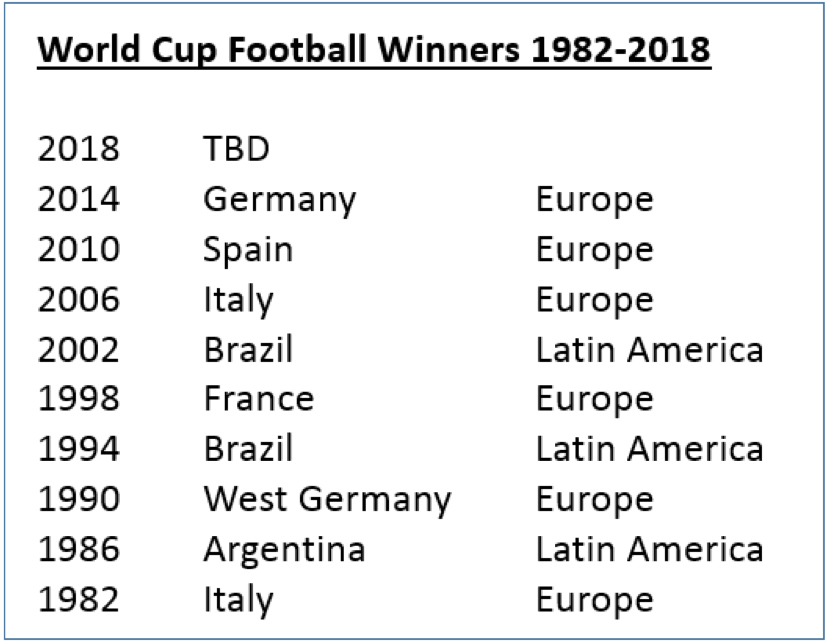 Since 1982, the World Cup was won by a European country six times (twice by Germany, twice by Italy, once by Spain and once by France), and by a Latin American country (twice by Brazil and once by Argentina) three times. But in terms of the biggest sponsors, the geographic distribution looks quite different.

So who is the big new spender? Asia! In 2018, seven out of the 12 top partners and sponsors are from Asia, or almost 60% (See the following chart). 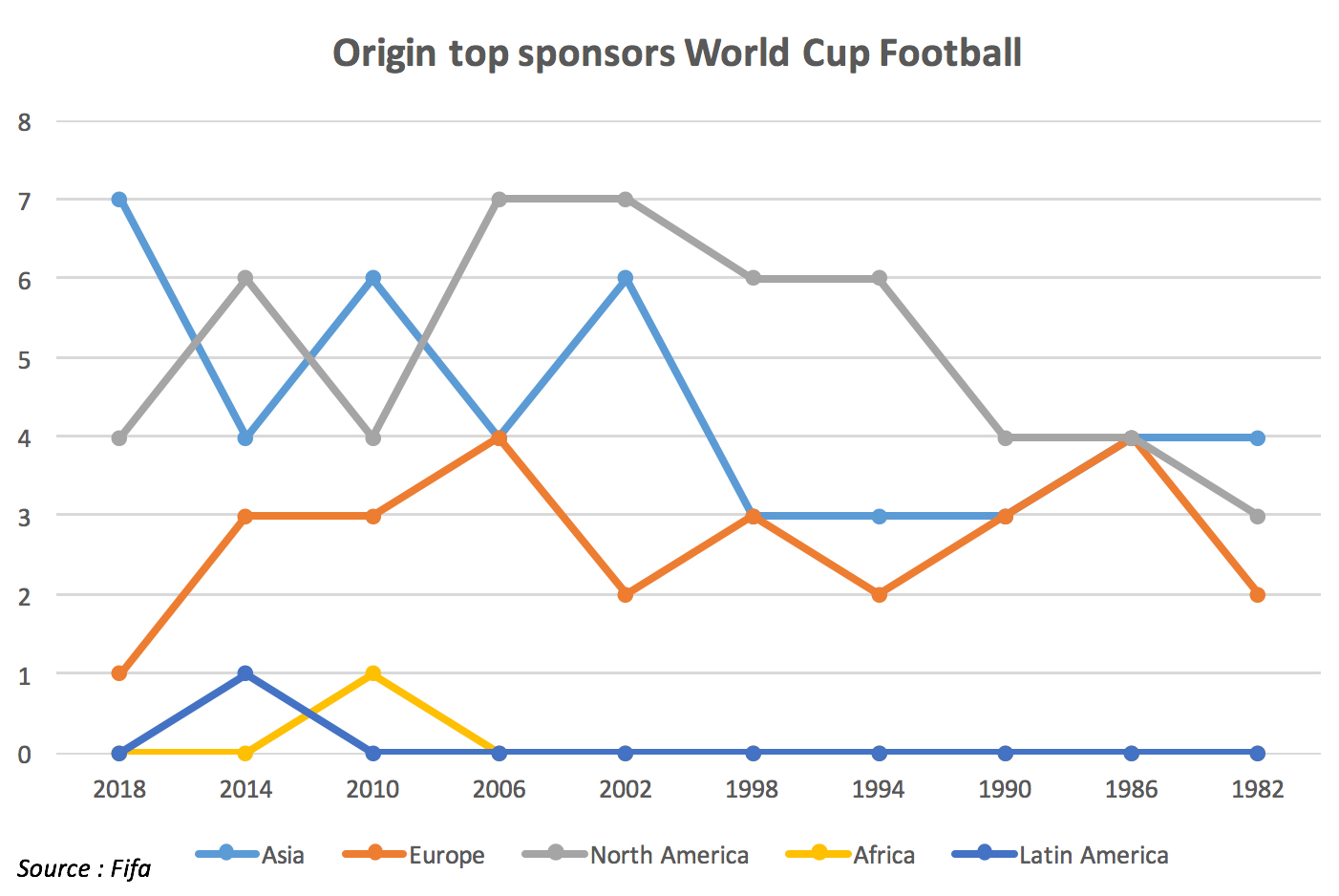 If you belong to that one half of the world population watching the World Cup, you might already have seen this trend from the growing number of Chinese billboards around the pitch. A third of World Cup top partners are now from China, a record for the country. Before 2014, not a single Chinese company was a sponsor. Within the last two installments of the event, there are now as many Chinese top sponsors as there are American.

It is also interesting to see that Chinese companies are replacing Japan as the top Asian sponsor. Until 2006, the Japanese represented the leading Asian brands at the World Cup. This time, they are completely absent.

If you’re not a football fan, it might surprise you that China is so active even without its national team qualifying for the tournament. China played in the World Cup only once, in 2002. 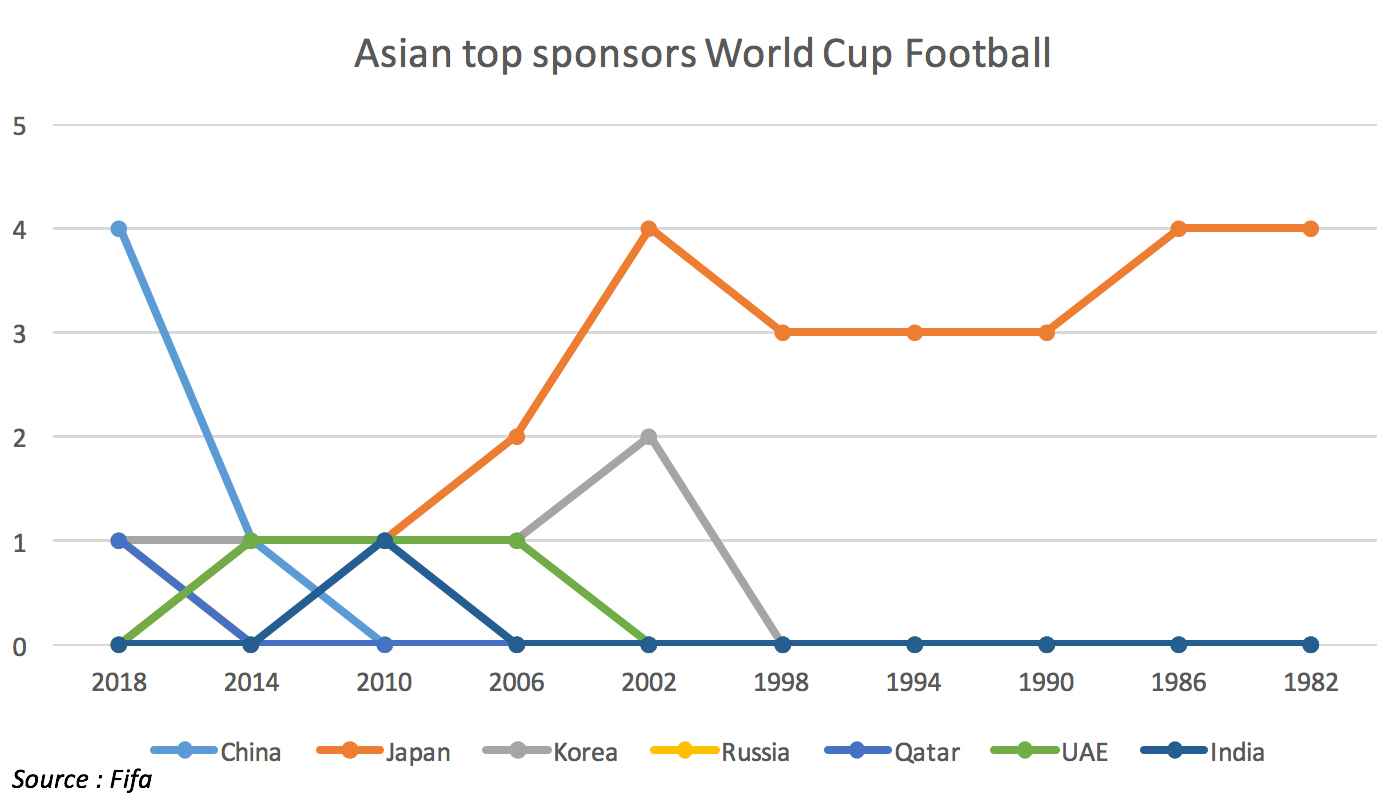 So could the World Cup sponsorship serve as a proxy of future global economic shifts? More than you might think.

In previous op-eds (see links below), I have pointed to the fact that Asia is rapidly overtaking Europe and North America in relative economic power, a trend that will continue for the next decades. A prestigious World Cup sponsorship is a sign of Asia’s rising economic power. It puts a company eye-to-eye with some of the biggest industry giants – in front of an enormous and still growing audience. This year, 200 million more people will watch the World Cup than four years ago. 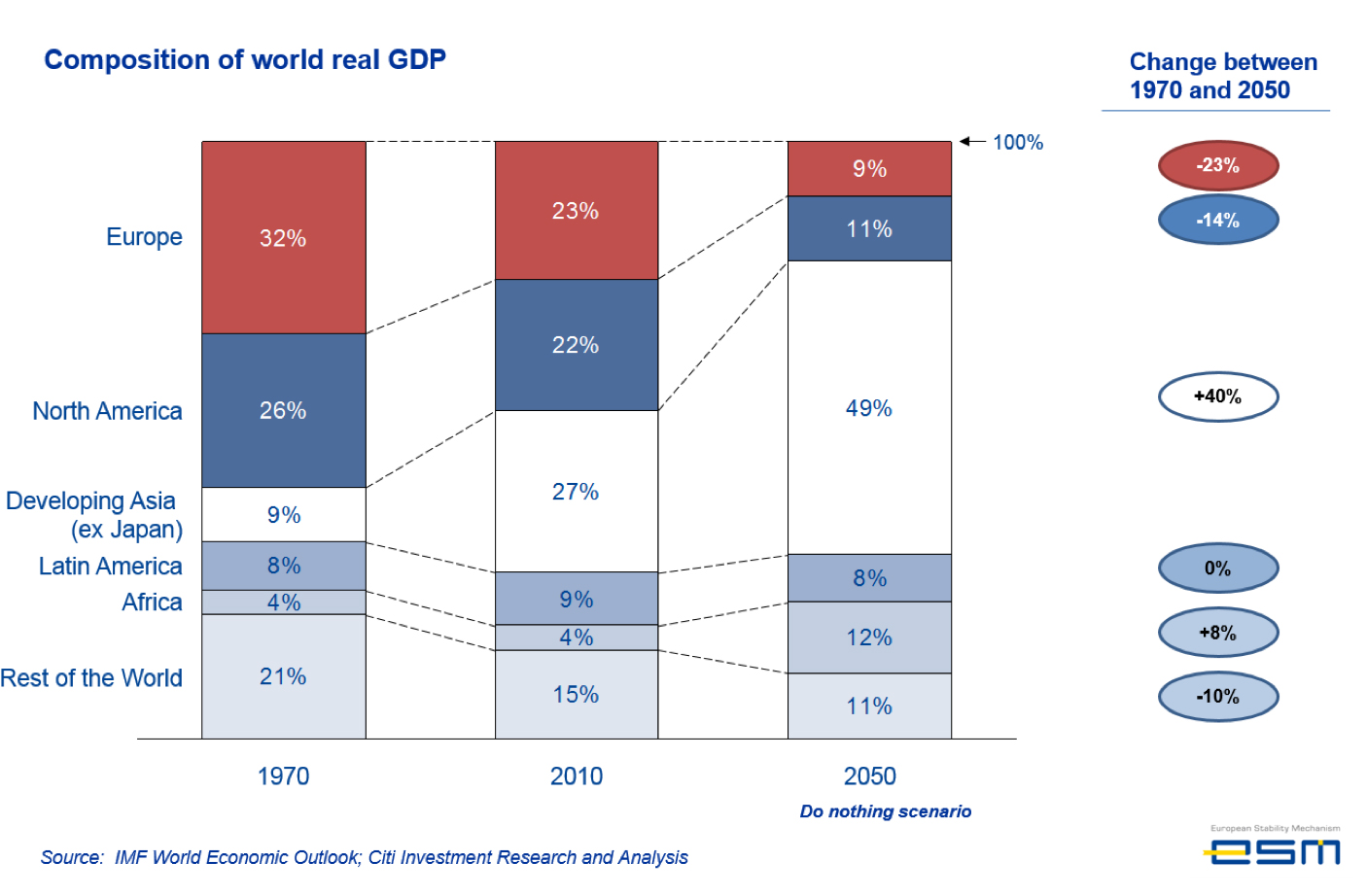 For now, Asia’s presence at the World Cup reflects its economic power more than its football prowess. Judging by the first results, Europe is still pretty good at football. But that might change. Asians love the sport, too. Most of the viewers of the World Cup 2014 were from Asia, and the number of fans is still growing. More than 1.5 billion people in Asia watched at least a minute of the World Cup in 2014, and more than 750 million watched more than 20 minutes. China has the most viewers: a quarter of a billion. With such a large audience, sponsoring the event by Chinese companies is a smart move. Even if the country has not qualified – yet.

The President of China, Xi Jinping, is a big football fan. He has three dreams for China and the World Cup: participate, host and win. China is investing heavily in football schools and exchanges with European counterparts to help it excel at the game. The financial and economic foundations are already there; the infrastructure to get better football results is rapidly being built. With 1.3 billion people, there is a lot of talent to scout.

I really hope that China will one day qualify. Of course, I also hope the same for my beloved Dutch, Bulgarian, and Luxembourg teams. And the economic shifts that are evident in the sponsorship of the game notwithstanding, I will concentrate on the tournament this summer. Why? Because it is simply the most beautiful game in the world. Even if you don’t take part. If you don’t believe me, just ask one of the 3.4 billion people watching the World Cup 2018 right now.