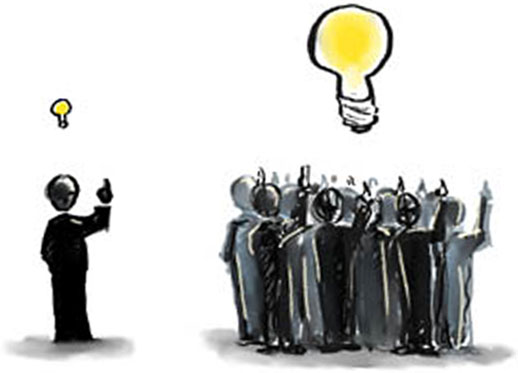 As head of the Human Health and Performance Directorate at NASA’s Johnson Space Center, Dr. Jeffrey Davis leads a team with a very unique charge: They are tasked with solving human health issues — in outer space.

In all, Davis’ team is dealing with about 45 different health problems related to long-duration space flight — everything from bone loss and muscle decay to water recycling and food preservation. For some of these problems, Davis and his staff have the answers, or at least know where to find them. But for others, Davis admits, the answers can’t be found in-house — and that’s where the job gets tougher, especially in times of budget austerity.

That was the situation Davis found himself in a few years back, as budget cuts limited his team’s research and development capability. When the extent of the cuts became clear, Davis knew that his group, and the organization as a whole, would need to start thinking differently about innovation.

In response to that challenge, over the course of the past five years, Davis has helped implement a culture of “open innovation” not only among his own staff, but throughout the entire agency. Utilizing multiple crowd-sourcing platforms, Davis has proven to colleagues throughout NASA that, sometimes, the answers to the space agency’s toughest problems can come from people who have no experience with space travel at all.

“The open innovation idea made sense for us,” Davis said during a lecture about NASA’s new innovation culture at the recent “Future of Medical Miracles” conference organized by Wharton’s Mack Center for Technological Innovation. “It allowed us to open up our problems to the crowd, if you will, and we got some novel ideas back. Since then we’ve been building [open innovation] into our basic problem-solving structure.”

The crowd-sourcing initiatives at NASA are built on several different platforms, including competitions that award prizes and such open-innovation services as TopCoder. But while the individual challenges that Davis’ staff faces may be wildly different — and while the systems for finding solutions to each may vary as well — the core idea behind each initiative is the same: In opening up the problem-solving conversation to include those from outside the agency, NASA acknowledges that, for all of its technical wizardry and know-how, it simply doesn’t have all the answers.

“This was about finding new approaches, new people and new organizations that were previously unknown,” Davis noted. “We thought we knew all of the players in the field, but we really didn’t.”

Among the open-innovation initiative’s biggest successes, Davis added, was a recent effort to find a new way to more reliably predict the occurrence of solar flares.

“We didn’t even provide data sets for that,” he said. “People had to find their own way [in determining] how to construct the algorithm. What we got back was a result from a man who had never worked with NASA, who wasn’t even a heliophysicist. He was actually a retired radio frequency engineer. In that case, we got a result well beyond even the parameters of the prize we were offering.”

In another challenge, NASA launched a competition for ideas on how to help preserve food for several years at a time in space. The best idea came from an individual completely outside the food industry, who suggested that flexible graphite might hold a solution. “In the end, we knew it wouldn’t be a final solution, but it met enough requirements that it changed our thinking about the problem and reinforced the notion that ideas can come from anywhere,” Davis noted.

Asked what advice he would offer to managers hoping to engender a more innovative culture in their organizations, Davis said it’s helpful to start with the basics by making sure any such efforts actually align with their overall strategy.

“It’s not anything startling,” Davis stated. “One important thing is having a novel approach that is rooted in strategy. Can you express [to your staff] why you want to go down that pathway? We had a typical platform, and then we had a budget cut in R&D which made us want to work differently with people, which then led us to innovation, which then led us to open innovation. Now we’re building a communication plan … and being very deliberate about it and very clear about how it traces back to our strategy. Otherwise, it can appear to just be a service you’re buying that’s not anchored in the idea of the culture.”