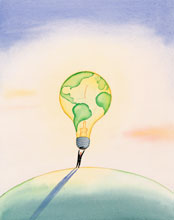 If one of the most important qualities of an innovator is the ability to imagine, it is hardly surprising that children should be among the world’s most important innovators. This fact has been re-established, again, by a group of girl scouts from Ames, Iowa. Aged between 11 and 13, the girls — who call their team the Flying Monkeys – have just won an innovation award of $20,000 for designing a prosthetic hand device that let a three-year-old child, who has no fingers on her right hand, hold a pencil and draw.

The Flying Monkeys call their device the Bob-1. Made of moldable plastic, comfort foam and Velcro, it costs significantly less than professional prosthetic devices whose prices run anywhere from $4,000 to $50,000. While preparing to design their device, the girls interviewed disabled people, prosthetics manufacturers and occupational therapists. They sent the Bob-1 to Danielle, a three-year-old with a congenital disability, whose Georgia-based family they had met through an online support group. Danielle used Bob-1 to make a drawing, but the device had a defect and cracked at the joint. Then the Flying Monkeys came up with Bob 1.2, a smaller and more stable version – and that won the award from among 179 submissions sent from around the world.

McKee, Voorhees & Sease, a law firm in Des Moines, Iowa, is helping the Flying Monkeys obtain a patent for their invention. This is part of the goals of the competition, organized by the First Lego League, an international program launched by FIRST (For Inspiration and Recognition of Science and Technology), a non-profit organization launched by inventor Dean Kamen and the Lego Foundation. The award was sponsored by the X Prize Foundation, a non-profit whose goal is to offer solutions to major global challenges. The award provides the Flying Monkeys with $20,000 towards patenting their invention. “Kids are natural innovators, and FIRST kids are offering solutions to some very big, real-world problems,” notes FIRST president Jon Dudas.

While speaking with Knowledge at Wharton in 2009 about their book on Innovation Tournaments, Wharton professors Christian Terwiesch and Karl Ulrich (now vice dean of innovation) said, “We have run tournaments with professional services companies, and we’ve run them with consumer goods companies. We’ve always been amazed, and I think our participants have also been amazed, by how cheap it is to generate a number of really good ideas.” The Flying Monkeys, undoubtedly, would agree.