Wharton's Itay Goldstein and Andrew Karolyi from Cornell discuss a new research intitiative that aims to clarify where the actual promise lies regarding fintech.

Three years ago, the editors at a top academic journal in finance were concerned. A lot of venture capital was flowing into fintech, or financial technology, but there wasn’t much research about the topic coming from academics, who are known for their rigorous testing and analysis. So they decided to adopt a new editorial protocol to encourage more research: They would accept a paper regardless of the final results, taking pressure off the researchers to have conclusive findings. Of course, proposals for papers have to pass tough scrutiny first to get pre-accepted.

It worked. The Review of Financial Studies received 156 proposals from 409 authors representing 183 universities and 22 research organizations or government agencies. They came from more than 20 countries, and nearly half were from outside North America. The top nations outside of the U.S. were China, Germany, U.K., Australia, Canada and India. The editors ultimately chose 10 proposals, which fell into three categories: blockchain, financial services and big data. The papers will be featured in the Review’s May edition.

“Fintech is really a group of technologies that have been emerging in recent years and potentially are going to completely reshape the finance industry,” said Itay Goldstein, Wharton finance professor and executive editor of the Review, on the Knowledge at Wharton show on SiriusXM. “What is unique about the current fintech revolution is that a lot of these technologies are happening outside of the traditional finance sector.” (Listen to the podcast at the top of this page.)

For decades, financial innovations such as ATMs and wire transfers largely came from the financial institutions themselves. But with the advent of connected mobile devices and consumers’ increased comfort in transacting business by cell phone, non-financial companies are getting into the game, such as tech giants and startups. They are offering mobile payments, money transfers, peer-to-peer loans, crowdfunding, blockchain, cryptocurrencies, robo-investing and other services, according to the Review.

With billions of dollars being pumped into fintech, it was thus surprising to the editors of the Review that there weren’t more academics looking into it. “We were absolutely struck by the fact that there was such a dearth of research,” said Andrew Karolyi, deputy dean and dean of academic affairs at Cornell SC Johnson College of Business and a former executive editor of the Review, who joined Goldstein on the radio show. “We felt like we needed to do something to stoke [interest].”

“What is unique about the current fintech revolution is that a lot of these technologies are happening outside of the traditional finance sector.” –Itay Goldstein

Their novel endeavor generated a deluge of proposals, and the final 10 chosen were notable for some surprising findings. Researchers, for example, tracked in real time how much of bitcoin activity was actually illegal. Two papers identified the biggest weakness of blockchain; one scrutinized robo-advisors to see if they really improved performance of investors’ portfolios. Yet another paper looked at fintech startups: Did they serve the unbanked as was expected by consumers and regulators? 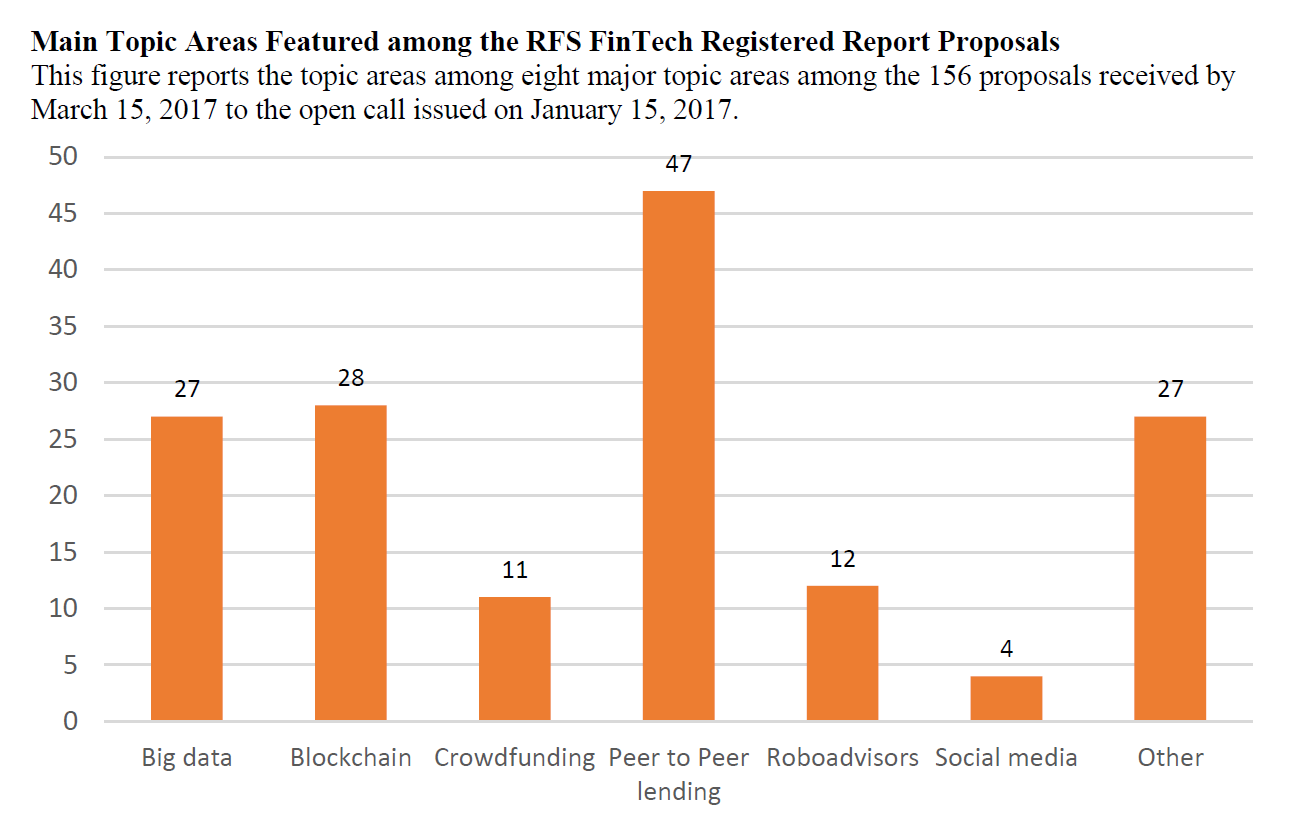 According to one paper, about 46% of bitcoin activity is illegal. “That was a real eye-popper,” Karolyi said. “The amount of activity that may well be an illegal share is strikingly higher than we ever would have thought beforehand.” The paper is “Sex, drugs, and bitcoin: How much illegal activity is financed through cryptocurrencies?” by Sean Foley of the University of Sydney, Jonathan Karlsen of the University of Technology Sydney (UTS), and Talis Putnins of UTS, Stockholm School of Economics.

The researchers used a creative method to estimate the share of illegal bitcoin activity. According to Karolyi, they swept the dark web using machine learning and used a novel application of network cluster analysis to “link [illegal] activities in real time … to events happening in bitcoin.” However, it’s not new for criminals to exploit new technology, Goldstein pointed out. Banks have all their restrictions because of experience dealing with crime.

But the paper also said that illegal activity in bitcoin has declined with time, as the cryptocurrency becomes more mainstream. “Over time, it has decreased as a relative share” as bitcoin has become more popularly used in legal transactions, Goldstein said. Criminals also likely realized that “it’s not the ideal way to hide criminal activity. You have a permanent record on everything.”

While bitcoin got the early headlines, companies have been more excited about the technology underpinning it: blockchain. At its simplest, the blockchain is a ledger that validates and records transactions without a central authority in control. In finance, blockchains can be used for money transfers, instant payment and settlement of trades, asset transfers, and others. Every user has a copy of the complete record and records cannot be changed because of the way transactions are linked in blocks. The belief is these features make blockchain secure and efficient.

“We were absolutely struck by the fact that there was such a dearth of research.” –Andrew Karolyi

But that’s not always true, according to two papers that will be published in the Review. “Forking [is] the biggest issue faced by blockchain applications,” according to an editorial written by Goldstein, Karolyi and Wei Jiang of Columbia University that will introduce the 10 fintech papers in their special issue. A famous case is the controversial fork executed on the Ethereum network that reversed a theft of $50 million in cryptocurrencies.

Forks are blockchains that diverge. Instead of one continuous chain of blocks, there are two or more. Forks can occur when software developers want to change the rules that validate a transaction. Because there is no way to change the previous blocks, they create a new branch of the blockchain that uses the new rules. It is like creating two sets of books using different accounting rules. Forks can be used to void a transaction.

Indeed, traders might try to fork the blockchain to void their losses, according to Jonathan Chiu of Bank of Canada and Thorsten Koeppl of Queen’s University in their paper, “Blockchain-based Settlement for Asset Trading.” To deter this behavior, they recommend having minimum trading volume, sufficiently strong preferences for speed and restricted risk positions.

Does Fintech Really Help the Unbanked?

One thing that excites regulators about fintech is its ability to reach people who have limited access to traditional financial services but possess mobile phones, such as rural populations. But three papers challenged that view. “Surprisingly … fintech lenders do not target borrowers with low access to traditional finance, suggesting that they are mostly competing with the traditional mortgage lenders rather than broadening access,” according to the Goldstein, Karolyi and Jiang editorial.

“It is a little disappointing,” Goldstein said. “One would hope that what fintech brings to the table is to expand the population that is being served.” However, Karolyi pointed out that the studies mainly looked at the U.S. landscape, where infrastructure for financial services is more mature and thus fintech has made less impact on the unbanked compared to emerging economies.

As such, Karolyi and Goldstein said more study needs to be done on whether fintech aids financial inclusion, specifically looking at cases abroad. “These issues are even more important in the world outside, particularly in less developed countries and emerging markets,” Karolyi said. “One of the big calls for future research is to really understand this — to push the frontiers to look for unique settings outside the U.S.”

“One would hope that what fintech brings to the table is to expand the population that is being served.” –Itay Goldstein

Another hot area of fintech is robo-advisory services, which are being offered to customers by many investment companies. These are computer programs that automatically set up, monitor and rebalance investors’ portfolios based on their goals, risk tolerance and other needs. They are less costly to run because work is being done by computers and they typically charge less, too. But do they actually improve investment performance?

Generally, the answer is yes, according “The Promises and Pitfalls of Robo-advising,” by Francesco D’Acunto of Boston College, Nagpurnanand Prabhala of Johns Hopkins University and Alberto Rossi of the University of Maryland. In their sample of investors in India, “most of them become better diversified and reduce portfolio volatility once they adopt robo-advising,” the editorial summary said. “Importantly, robo-advisory demonstrates a clear benefit in mitigating the most prominent behavioral biases, such as the disposition effect and momentum chasing.”

Disposition effect is the tendency of investors to sell assets that have risen in value and hold on to the losers. But this could hurt investment performance because assets rising in value tend to keep going up for a time and those that go down keep declining. Momentum chasing is another investor behavior that can be damaging to portfolios; it’s like buying high and selling low because one follows the crowd. Robo-advisors can mitigate both behaviors. But there is a big caveat: Successes or pitfalls of a robo-advisor largely depend on how well it is designed.

Looking ahead, Goldstein and Karolyi want to keep the fintech research pipeline robust. “The academic community has to continue to look into these issues and explore them, empirically and theoretically,” said Goldstein, adding he is encouraged that there is much more fintech research today. Karolyi believes their endeavor underscored the value of working across disciplines, such as finance scholars collaborating with computer scientists. It’s critical for academics to develop technology and financial expertise, Karolyi said, so as to “know how to push the frontier.”