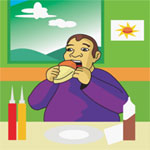 Perhaps it was the statement from the Centers for Disease Control and Prevention in Atlanta that more than 30% of all adults in the United States are obese, a number that has more than doubled since 1980. Perhaps it was the new report that obesity may cause as many as 365,000 deaths per year at a time when Americans reportedly spend over $40 million annually on books, products and programs to help them lose weight. Or maybe it was the CDC’s dire prediction that “current data indicate that the situation is worsening rather than improving.” For whatever reason, the latest statistics have flagged obesity as a serious health issue that corporations can no longer ignore.

Yet according to Wharton experts and others, the dramatic increase in obesity is not what’s driving employers throughout the country to address the problem. This past year, these experts say, companies seem to have declared war on fat for one simple reason: Obesity is now recognized as a real drain on companies’ health care costs. “I don’t think the increase in obesity, the sheer numbers, are what’s driving companies to take this seriously,” says Peter Cappelli, director of Wharton’s Center for Human Resources. “The big driver is really the cost of health care, which corporations have to bear.”

“We do know that obesity is a strong predictor of medical expenses,” adds Mark V. Pauly, Wharton professor of health care systems, business and public policy. “The business case for doing something to reduce obesity is not that employees would be more productive, but that business expenses would be less costly in terms of health insurance programs.” The general trend for most employers, he says, “is that sooner or later, the deal you get on health insurance depends on how expensive your workers are. And when it comes to obesity, what’s made it more prominent is that it’s become more prevalent. Obesity in employees and dependents is starting to get employers’ attention.”

National business advocacy groups and associations now call obesity a “preventable condition” — a word choice that both recognizes the problem and acknowledges efforts to do something about it. According to workplace surveys, the vast majority of organizations with 200 or more employees say they offer programs designed to help improve the health of employees, while about a third of smaller companies offer programs as well. The most prevalent fitness initiatives in companies today include on-site fitness centers or sponsored fitness programs, along with web-based tools for tracking wellness and information.

Yet health care experts also say that many of these programs fail to deliver long-term, significant improvements. Today’s spotlight on obesity in the workplace comes at a time when companies are beginning to realize that they have to do more than offer employees access to weight loss incentive programs, fitness centers and educational seminars. As a result, corporations like Home Depot and Dow Chemical are joining forces with major universities and The National Institutes of Health to develop environmental interventions to help people manage their diet and weight — not just pump up the workplace with gleaming, state-of-the-art fitness equipment.

Based on statistics, the task is daunting. Obesity and overweight conditions contribute as much as $93 billion to the nation’s yearly medical bill, according to studies reviewed by the National Business Group on Health, a Washington, D.C.-based non-profit organization that represents large companies. Of that amount, the total cost of obesity to U.S. companies is estimated at more than $13 billion per year — a price tag that includes $8 billion for added health insurance costs, $2.4 billion for paid sick leave, $1.8 billion for life insurance and $1 billion for disability insurance. According to recent studies on the economic cost of workplace obesity, that translates into 39 million lost work days, 239 million days where work activity is restricted, 90 million sick days or days in bed and 63 million visits to physicians.

In October, Adam Gilden Tsai, instructor of medicine in psychiatry at the University of Pennsylvania Medical School, further refined the financial costs associated with being overweight to include a per-person charge. At a conference on obesity, Tsai noted that when compared to a person of average weight, an obese person accounts for an additional $1,034 every year in doctors’ visits, medications and medical procedures. “I don’t think anyone would question that obesity is a significant contributor to health care costs,” he says.

For adults, overweight and obesity ranges are determined by using weight and height to calculate a number called the “body mass index” (BMI), which correlates with their amount of body fat. For instance, according to the CDC, a person who is 5’9″ and weighs 125 pounds to 168 pounds is considered a healthy weight; the same person weighing 169 pounds to 202 pounds is overweight; and the same person weighing more than 203 pounds is considered obese. When statistics are tallied to show how many Americans are obese or overweight, more than half today fall into one category or the other.

Among developed countries, the United States has the most obese and overweight people, according to Jean Lemaire, Wharton professor of insurance and actuarial science. “Americans are much heavier than they were 10 years ago and much heavier than other people around the world,” says Lemaire. “Life expectancy in the U.S., which is among the richest countries, only ranks 48th in the world. Being overweight is comparable to having diabetes or having high blood pressure. It is a true diagnosable disease that affects life expectancy.”

According to statistics compiled by the National Business Group on Health through its Institute on the Costs and Health Effects of Obesity, obesity is now considered a greater trigger for health problems and increased health spending than smoking or drinking. Based on statistics from a 2002 report called, “The Effects of Obesity, Smoking and Drinking on Medical programs and Costs,” published in the Journal of Health Affairs, individuals who are obese have 30% to 50% more chronic medical problems than those who smoke or drink heavily.

As obesity rises, the medical conditions associated with obesity have helped trigger an increase in health care costs. The National Business Group on Health notes that obesity accounts for approximately 9% of total medical care expenditures each year, and that 8% of private employer medical claims are due to overweight and obesity.

All of this begs the question: Just how big a slice of the rise in medical costs can be attributed to obesity? In 2004, the last year for which data are available, the National Coalition on Health Care (NCHC) reported that total health care expenditures rose 7.9%, for a total of $1.9 trillion in health care spending. When analyzing increases in medical spending from 1987 to 2001, a 2004 report called, “The Impact of Obesity on Rising Medical Spending,” documented that obesity drove 27% of these increased costs.

There’s no doubt that rising health care expenses increase the cost of medical care and health insurance for employers and workers. The NCHC notes that in 2005, “employer health insurance premiums increased by 9.2% — nearly three times the rate of inflation.” In an effort to counter these statistics and to help employees adopt healthier life styles, employers are offering a variety of programs and benefits. For example:

Data to confirm if and how these programs work is hard to come by. Wharton’s Pauly cautions that “with wellness and fitness programs I have reviewed, the sweeping generalization is that their results are mixed in terms of effectiveness.” In fact, in 2004, two-thirds of the companies surveyed by the National Business Group on Health reported that only 25% of their workers participated in existing fitness programs — and it wasn’t even clear if the participants were already fit or chronically unfit. Pauley also cautions that programs that offer financial incentives for employees to become fit are often a “delicate issue. Even if you spin it as a carrot, it can become a stick.”

This may help explain why companies like Dow Chemical are taking a different approach. As part of a four-year study being funded by the National Institutes of Health, Dow is promoting weight management and physical activity for roughly 10,000 employees at 12 work sites around the country. The study, called “LightenUP,” uses environmental approaches and interventions to supplement existing individual-based program efforts.

In coordination with principal investigator Ron Z. Goetzel of Cornell University and the study team, Dow plans to work with food service and vending companies to reduce the amount of high-fat and high-sugar items offered; put up signs to encourage people to take the stairs instead of the elevator; offer weight management tracking programs, and implement walking paths and routes around the buildings. “Providing opportunities for employees to develop a healthy lifestyle at the workplace has become a more strategic focus of the company,” says Goetzel, director of Cornell’s Institute for Health and Productivity Studies.

Karen Tully, Dow’s global health promotion leader, notes that over 60% of Dow employees in the U.S. are either overweight or obese. Without giving a specific figure, Tully says that the 20% increase in health care costs for overweight Dow employees tracks the national average. By participating in programs like LightenUP, Tully argues, Dow is not only “addressing overweight and obesity issues” but anticipating a substantial return on investment. According to Goetzel, preliminary reports from the study indicate that if the program succeeds in reducing individual employee risk factors, the subsequent reduction in corporate health care costs would be more than double the company’s initial investment in the program, which Tully says “would be a huge return.”

Although the potential benefits to individuals and companies are obvious, there’s something about fighting obesity in the workplace that gives Cappelli and others pause. Why? “It’s another boundary that’s being crossed between the lives of the employees and the interest of the employers,” says Cappelli. Putting the spotlight on obesity is particularly unsettling because “unlike smoking — which is clearly bad, not only for the individuals who do it, but for the ones around them — obesity has no effects on the people around you. It’s just about you.”

From here on in, Cappelli notes, “the door is open for employers to think about all kinds of other employee-related issues which effectively cost them money. This has not been examined critically in any serious way. People in health issues see [weight-related initiatives] as a good thing. And the current interest in curbing obesity will probably stand because no one is pushing back on the employee rights’ side. But if you start getting into other aspects of people’s lives, you may see groups pushing back.”

For instance, Cappelli says, the “next step on this continuum [of corporate influence] is for [activities] that might affect you and your performance at work. Some professions already prohibit their executives from participating in extreme sports.” Cappelli also notes that companies may already be exerting some unspoken influence on the size of families by offering cafeteria benefits that index the costs according to the number of children receiving benefits. “You have, effectively, created the incentive for fewer kids,” he suggests. “No one has thrown up boundaries to this, because it’s still primarily an abstract concern for people,” Cappelli adds. “And as long as employers put their toe in the water and there’s no objection, others will follow.”

Efforts Are Growing to Trim the Fat from Employees — and Employers’ Health Care Costs. Knowledge@Wharton (2006, November 01). Retrieved from https://knowledge.wharton.upenn.edu/article/efforts-are-growing-to-trim-the-fat-from-employees-and-employers-health-care-costs/