‘Tis the season — to wrangle through the annual White Elephant holiday gift-swapping game and go home with something you don’t want. But with a few tweaks, there is a way to make gift-giving more efficient and make everyone happier, according to Daniel Fleder, a Wharton alumnus, and Kartik Hosanagar, a professor at Wharton, in this opinion piece.

At a party last holiday season, one of us brought the best gift that $15 could buy — a rare Charlie Parker jazz album – to a White Elephant gift-swapping game, only to come home disappointed with a backscratcher. This year, we are determined to do better.

A staple of the holidays, the White Elephant Game is more popular than ever. In this game, players submit gifts to a pile, draw one randomly, and if they don’t like their gift they can “steal” someone else’s present. But being forced to swap can reverse one’s fortune in an instant, which is what inspires the comparison to white elephants.

According to legend, the King of Siam gave white elephants to people who displeased him. An elephant provided little or no functional value but its upkeep was expensive and often brought financial ruin to the recipient. The White Elephant Game is aptly named because, while entertaining, it typically yields unsatisfactory outcomes for most players. So it is worth asking whether the game is actually a good way to distribute gifts.

Many economists consider holiday gift-giving to be inefficient. As economist and former Wharton faculty member Joel Waldfogel puts it, the gifts “we receive produce less satisfaction than cash gifts of equal size, putting aside sentimental value.” We decided to evaluate whether the game helps us get the gifts we want or adds one more inefficiency to holiday gifting.

“We now add a new rule: Players can only trade if the recipient is also willing.”

To test our ideas, we simulate them virtually in the computer instead of holding multiple actual parties. In our virtual party, the rules are the following: 30 players submit unwrapped gifts, gifts are initially distributed at random, and then players take turns trading. On each turn, a player swaps gifts with a person of his choosing to get his favorite gift, without regard for whether the other person is a willing swapper. This gameplay may continue for multiple rounds. We call this the Greedy White Elephant game.

Thus far, players trade to improve their own satisfaction, even if it hurts others. Can we do better? We now add a new rule: Players can only trade if the recipient is also willing. That is, the trade must increase the recipient’s satisfaction, or at least leave it constant. We call this Pareto White Elephant, after the efficiency economist Vilfredo Pareto who, in 19th century Italy, discussed the reallocation of resources in ways that do not leave any participant worse off than before.

The Pareto game shows two differences. First, satisfaction increases and never decreases because players can only make trades that leave both parties better off. There are no cycles of satisfaction endlessly going up and down, in which players make trades that are reversed moments later. Second, satisfaction is higher under Pareto (90%) than in the Greedy game (80%). In other words, players would be 10 percentage points better off by adding this simple Pareto rule at their holiday party.

“Two rounds seem sufficient for satisfaction to near its peak.”

The graph also answers the question of, “How long should the group play?” Most holiday parties play a single round of the game, with everyone getting one turn. If you played longer, would the additional swapping create a better allocation of gifts? Yes. Fortunately, you don’t have to play all night. Two rounds seem sufficient for satisfaction to near its peak.

Of course, people really play for fun. But a well-designed game can potentially eliminate millions of dollars of gift-giving inefficiency. So this holiday season, play two rounds of Pareto White Elephant instead — and have one more reason to celebrate. 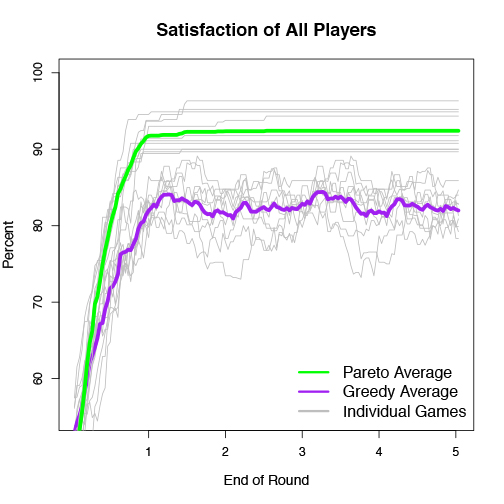