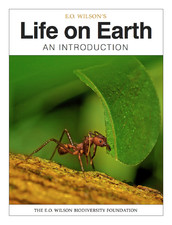 Forget your dusty old biology book. Life on Earth, a textbook by E.O. Wilson now available on iTunes, may soon make it obsolete.

Wilson’s book is an “enhanced” digital book, meaning it incorporates video, animation and other high-tech features to explain the fundamentals of biology. According to Apple, one page “lets the student choose how much detail to reveal in [a] cell interior, from empty compartments to a detailed cell completely packed with proteins and small molecules.” Another “allows the student to control the progress of cell division, with step-by-step explanations coupled to real cell footage.” Animated maps of global photosynthesis and a tour of a wild preserve in Mozambique are only topped by the author’s introduction to ecology, which takes place — where else — “[on] the edge of Walden Pond.”

Life on Earth is just one of a new lineup of enhanced e-books that are scheduled to come out from publishers such as Penguin, which plans to release 50 enhanced digital titles this year, according to The Wall Street Journal.

Publishers are banking on a success similar to what they have seen in regular digital books. “E-book sales continue to climb, with digital titles accounting for 14% of books sold in the second and third quarters of 2011, up from 4% for all of 2010,” the Journal notes, citing data from publishing industry analyst Bowker Market Research. Meanwhile, tablet sales are skyrocketing — 65 million were sold last year, according to the Journal — meaning an increasing number of readers should be able to download and enjoy enhanced digital titles.

And while the pricing might be reasonable — many enhanced titles are available for download as books or apps between $10 and $20 — it isn’t clear that the new format will ultimately lead to a publishing revolution. “While I do not have hard numbers, it appears that very few enhanced e-books have been successful to date,” says Stephen J. Kobrin, publisher and executive director of Wharton Digital Press. “The old dog dancing metaphor applies: You are blown away by seeing the dog dance, but after a few minutes you begin to ask how good it is at dancing.  There has to be a very good reason to take the reader out of the narrative — bells and whistles only seem cool for a while.”

Meanwhile, Apple has introduced software for authors interested in creating their own enhanced e-books, but Kobrin remains skeptical about how this would help the format gain traction. “Producing a good enhanced e-book is anything but easy. You need high quality video and graphics, not what comes out of a point-and-shoot.”

Life on Earth is a perfect example. “[It] looks great,” says Kobrin, “but take a look at the credits. There is a production cast of thousands.”