Wharton’s Lawton R. Burns speaks with Wharton Business Daily on SiriusXM about the Theranos case and the conflict between big tech and health care.

There’s much more at stake than a potential 20-year prison term for Theranos founder Elizabeth Holmes, whose federal fraud trial opened last week. Her case has come to symbolize the perpetual conflict between big tech and health care.

“It’s a culture clash, to be sure,” Wharton health care management professor Lawton R. Burns said in an interview with Wharton Business Daily on SiriusXM. (Listen to the podcast above.)

The startup culture in Silicon Valley and beyond moves at warp speed, he said. When investors are enthusiastic about a promising new venture, the hype builds and the dollars roll in. Theranos reached a valuation of $9 billion on a bogus claim that it developed a revolutionary lab test capable of screening for a range of conditions on a single drop of blood. It was exactly the sort of cost-efficient solution that big tech is known for, so it’s little wonder that investors fell for the pitch from the charismatic Holmes, who fashioned herself after Apple visionary Steve Jobs.

But there’s almost always friction when big tech turns its eye toward health care as “virgin turf to apply all of this new, cool stuff to,” said Burns, who is co-author of the book Big Med: Megaproviders and the High Cost of Health Care in America. “The question is whether or not all this stuff is going to work and transform health care or, conversely, at the extreme, just crash and burn.”

The divide comes from the basic difference between the two industries. Technology is deployed to do things at scale; health care is a business centered on people.

“There are no economies of scale in health care because it’s labor-intensive, whereas tech is coming at this from a capital-intensive stance,” Burns said. “They’re thinking, ‘Man, if we can just deploy all this capital-intensive equipment to a labor-intensive industry, we’ll make it much more productive and efficient and rational. That’s a huge challenge right there, just bridging that gulf.”

Burns pointed to electronic medical records as an example. They were supposed to make the administration of health care easier, but both physicians and their patients dislike them. Some doctors have “rebelled,” he said, forcing hospitals to hire data entry personnel to transcribe the information. And patients frequently complain that their physician is pecking away at a keyboard instead of looking and listening to them. Burns describes such experiences as “dissatisfier” variables in an equation already fraught with long waits for appointments and short interactions with physicians, making patients wonder about the quality of service they are getting.

Meeting in the Middle

If Theranos could have delivered on its promise, the diagnostic test would have achieved mind-boggling economies of scale. A mere pinprick of blood meant patients wouldn’t have to go to a lab, clinic, or hospital to see a phlebotomist or give multiple samples. Walgreens was sucked into the pitch, striking a partnership with Holmes to offer the tests in its stores. High-profile investors included Oracle founder Larry Ellison, members of the Walton family, Rupert Murdoch, and former U.S. Secretary of Education Betsy DeVos.

“Walgreens got hosed by this deal,” said Burns, referring to the company’s $140 million lawsuit against Theranos that was settled for reportedly less than $30 million. “That’s just the downside for one particular pharmacy chain here, but I think that downside rachets through other people, other players in the industry.”

Indeed, the Theranos case is sparking some introspection in Silicon Valley about startup culture. Eric Bahn, co-founder of early-stage VC firm Hustle Fund, told Wired.com he’s worried that Holmes’ downfall will make it more difficult for female founders who already deal with a dearth of investors. “I’m glad the ‘Fake it till you make it’ mantra of Silicon Valley is coming into question,” he said. “For the past decade, it almost felt like a rallying cry for founders and investors alike.”

“There are no economies of scale in health care because it’s labor-intensive, whereas tech is coming at this from a capital-intensive stance.” –Lawton R. Burns

Paul Graham, founder of Y Combinator, tweeted that Holmes shouldn’t be seen as normal. “Journalists like to present Theranos as typical of Silicon Valley, but people like Elizabeth Holmes are actually much rarer there than in the rest of the business world, or in politics.”

Burns said there is a better way to view the intersection of big tech and health care: Technology can supplement and complement the work of a physician, but it cannot replace it.

The falling demand for telemedicine is a testament to that, he said. A decade ago, telemedicine was hailed as a great disruptor for the industry, much like the electronic medical record. That expectation fueled a lot of venture capital investment.

“If people would bother to look at the evidence… virtual visits are on the decline, and they’ve been declining for some time,” Burns said. “We have all this money pushing into health care to fund these startups, and yet on the demand side it seems to be falling. It’s like two ships passing each other in the night.”

Photo by Max Morse for TechCrunch, CC BY 2.0 <https://creativecommons.org/licenses/by/2.0>, via Wikimedia Commons 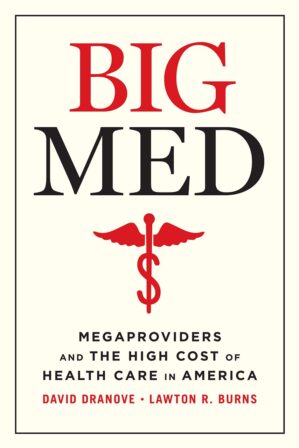 Get Big Med, by David Dranove and Lawton Burns.