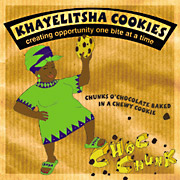 When she worked on Wall Street launching IPOs, Alicia Polak helped generate new wealth. Now she is working to build wealth in the dirt-poor black township of Khayelitsha, 30 minutes down a dusty road from Cape Town, South Africa.

Two years ago, Polak founded The Khayelitsha Cookie Co., which now employs 11 women from the sprawling shantytown to bake high-end cookies and brownies that are distributed to top hotels, restaurants and coffeehouses throughout South Africa. The cookies come packed in plastic with a cartoon on the front showing a big, African ‘mama’ in traditional dress and the company slogan: “Creating opportunity one bite at a time.”

For Polak, the entrepreneurial venture is about making money, but also much more. “My driving force in this company is that I want them out of those shacks,” says Polak of the hundreds of thousands of people living in poverty in South African townships. “I want to help change their lives using this company as the vehicle.”

Polak’s firm has been receiving consulting help from Wharton professors since it started, but it is now formally part of Wharton’s new Societal Wealth Generation program. The program, which was established earlier this year, explores ways to apply entrepreneurial business models to social problems such as healthcare, education and unemployment. In addition to Khayelitsha Cookies, initiatives include a healthcare program in Botswana, an animal feed project in Zambia and a potential peanut-processing business in Southern Africa.

Ian MacMillan, director of Wharton’s Sol C. Snider Entrepreneurial Research Center, says the goal of the program is to move philanthropy away from dependence on charitable donations to projects that can sustain themselves financially over the long term. “What you set in motion is a virtuous cycle,” he explains. “The more money you make, the more people are helped. The more people who are helped, the more money the entrepreneur makes.” He also points out that entrepreneurs can be successful in developing economies on very little profit. “What looks to be not much profit in the eyes of a U.S. entrepreneur is a lot of money in those countries. They’re much happier with a smaller profit.”

The program will also try to find ways to use charitable donations as the seed money for projects that will eventually be able to finance themselves over time, allowing donors to move on to fund other worthy new ventures.

While social entrepreneurship has been gaining interest in philanthropic circles in recent years, MacMillan envisions deeper changes through societal wealth generation in which commercial solutions are applied to broad-based problems. He says there are already models and micro-finance available for small individual projects. “Alicia Polak’s idea was created in Africa and at the moment is quite small, but we could grow the idea and if it works it can be replicated in many other places,” says MacMillan. “I don’t think we should be involved in something that at a minimum can’t benefit hundreds, if not thousands.”

Indeed, Polak is now working on ways to scale up the company, possibly exporting the cookies to developed countries in fanciful decorative tins manufactured by a South African artist. She is also thinking of bringing the cookie concept to disadvantaged parts of the United States, such as New Orleans, Mississippi or Camden, N.J. “If we can do this in South Africa then it certainly can be done here. The product could just be localized wherever you decide to build the next facility, taking in some local flair and flavor.”

A New Home in a Poor Township

For now, Polak’s virtuous cycle lies in Khayelitsha, which means ‘new home’ in the local Xhosa language. She points to a photo of the crowded jumble of shacks on laundry day. Tattered bed sheets flutter through the township, which is home to between 500,000 and 1 million. As an unofficial settlement, there are no public latrines in Khayelitsha.

“She has managed to do something in an area of Southern Africa that most people would have thought would not be possible,” says James Thompson, associate director of Wharton Entrepreneurial Programs and a native of South Africa who met Polak through the business school at the University of Cape Town. “Khayelitsha is not known as a hub for economic activity. It has a fairly checkered history as one of Southern Africa’s poorer and more violent townships.”

Khayelitsha Cookies was founded in a community center with two ovens in 2004. The center had once been home to a training program endowed by Snowflake, a large South African baking company. The program flopped for many reasons, says Polak. First, Snowflake provided recipes written in English, but hardly any of the women in the township knew English, and many could hardly read. When Polak looked closer at the recipes, she noticed they called for sugar and butter. “That was a joke. There is no butter in this township. That would be such a luxury item.”

Polak’s cookies do have butter in them, but she has a car and suppliers who are able to bring butter to the company. “Snowflake had left the women to their own devices to source the butter, but they had no vehicles and could not go out of the township to get butter,” says Polak. “I really believe Snowflake had the best of intentions, but there was nothing sustainable about this program.”

In the end, the women were even more disenfranchised because they had been promised a program that would give them new skills. “They were pretty upset.”

Meanwhile, Polak’s own career was in flux. As an investment banker specializing in IPOs for closed-end country funds at Merrill Lynch, she had traveled extensively to developing countries where she was moved by the poverty she saw. India, she recalls, was particularly harsh. “That kind of sat with me,” she says.

Her dream was to work for a large, international relief organization, so Polak went back to school to earn an MBA at New York University to develop strategic management and organizational skills. “Nobody wanted to hire me. If you come from investment banking they just think you’re a geek who runs numbers,” she says. “The aid industry is incestuous, and if you didn’t get in there through somebody — forget it. I begged for years for a job.”

Polak was determined to make a difference and eventually got a job distributing wind-up radios to poor villages throughout Africa. On her travels she grew even more disenchanted with the non-governmental organizations (NGOs) that were distributing private aid to the needy. “It’s hard to make a blanket statement, but I saw a lot of waste. The NGOs are also there to create jobs for expats who live very nicely.” She remembers being particularly struck by one NGO’s large fleet of Toyota land cruisers equipped with leather seats. “Couldn’t they at least get the cloth seats?”

Polak was a believer in the product she was distributing. The wind-up radio was a simple product that could be a lifesaver in a disaster, like the floods that devastated Mozambique in 2000. “I loved what I was doing and the product was brilliant, but I still felt I was just giving something away.”

She grew even more troubled after an incident in Rwanda. She had just delivered a radio to a 16-year-old girl who was raising five siblings alone. One parent had died in the recent genocide in that country, the other from AIDS. The girl and her family were thrilled to have the radio, which was a highly prized item. But as Polak walked away from the home, she noticed out of the corner of her eye that a group of men had slipped up to the house through the network of trails that course through Rwanda and facilitated the genocide.

Her heart went cold. She was afraid she had just made the girl vulnerable to the men who would take the radio from her, possibly with force. “I thought, what did we just do here? What were the ramifications of giving a young 16-year-old girl a radio that is so valuable?” says Polak. “Maybe nothing, but the point is I just felt like one of these do-gooders who hasn’t thought things through.”

As she grew to question the established aid-distribution system more and more, Polak, who was then living in South Africa, turned back to her roots in business. One day she conceived of the cookie company, and in a matter of months she got it up and running on savings she had put aside during her banking career.

Cookies made sense in the context of Khayelitsha. Baking is a skill that is transferable across cultures and languages. “It’s a simple product, and the end-product is friendly. It’s not as if I’m trying to market a complex product or something that is that is difficult [to produce].”

Polak brought an entrepreneur’s vision to the product, even down to collaborating with a local artist on the cartoon image of the mamas on the cookie packs. “The faces just popped into my head one day,” she says. She also took a business approach, rather than a simple do-good approach, to developing a market for the cookies. While South Africa’s population is 44 million, the nation’s 4 million whites control most of the buying power. She knew they would not be inclined to buy premium cookies made by poor black women in a township. Developing a plan to sell to them would never pay off.

“I decided I can’t change all these perceptions. I’m not going to market to them.

Instead of working into a problem, I said ‘Forget it.'” To find a market, she turned to the tourists in the downtown hotels, who receive a Khayelitsha brownie on their pillows at night, as well as local restaurants and coffee houses. The company has sold more than 171,000 packs of cookies, and Polak says she expects it to break even in the next few months. She has taken on some South African investment partners and hopes to make her employees part-owners in the business soon.

Polak uses standard business measures to assess her business’s strength, but for her there is another form of compensation. “If the mamas are cruising around in BMWs in five years, then I have attained a dream that I could not have ever imagined.”

Editor’s note: As a rule, Knowledge@Wharton doesn’t include web links to companies or provide contact information for their founders because that would make the article a thinly disguised ad. In very rare cases, though, we make exceptions to that rule. This is one of those cases. To learn more about the Khayelitsha Cookie Company visit its web site, www.khayelitshacookies.com. To contact Alicia Polak, email her: adpnyc@gmail.com

"Creating a Sustainable Business among South Africa’s Poor ‘One Bite at a Time’." Knowledge@Wharton. The Wharton School, University of Pennsylvania, 12 July, 2006. Web. 07 May, 2021 <https://knowledge.wharton.upenn.edu/article/creating-a-sustainable-business-among-south-africas-poor-one-bite-at-a-time-2/>

Creating a Sustainable Business among South Africa’s Poor ‘One Bite at a Time’. Knowledge@Wharton (2006, July 12). Retrieved from https://knowledge.wharton.upenn.edu/article/creating-a-sustainable-business-among-south-africas-poor-one-bite-at-a-time-2/

"Creating a Sustainable Business among South Africa’s Poor ‘One Bite at a Time’" Knowledge@Wharton, July 12, 2006,
accessed May 07, 2021. https://knowledge.wharton.upenn.edu/article/creating-a-sustainable-business-among-south-africas-poor-one-bite-at-a-time-2/