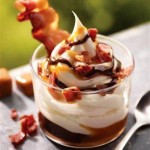 Burger King received lots of buzz last month when it launched its new summer menu, including an unexpected treat: a bacon sundae.

Yes, that’s soft-serve vanilla ice cream topped with hot fudge, caramel and crumbled bacon. And to emphasize the bacon part, the whole thing is served with a bacon-slice garnish.

Initially, some thought the company must be joking. “I wasn’t sure if this was for real,” says Wharton marketing professor Barbara Kahn. “In the past, [Burger King] would do outrageous things just to get media and social attention. The famous ones were the ‘Whopper Freak Out‘ — where they removed the Whopper [hamburger] from the menu and filmed customers freaking out when they ordered one and were told there were no more left — and the ‘Whopper Virgins,’ where Burger King went to remote places [around the globe] where people had never had hamburgers and had them taste test the Whopper. Another famous [ploy was giving] away cologne that was called ‘Blaze’ and smelled like a hamburger. The whole point of these [campaigns] was to get attention. So my first thought was that this is another attention-getting idea — and that may be part of it.”

But gimmick or not, a sundae has to taste good in order to sell. Lee Stapleton, program director at Sensory Spectrum, a New Providence, N.J.-based consulting firm that works with food manufacturers on product evaluation, says that the combination is not that far-fetched. “As a taste experience, the smoky-meaty note of the bacon and its saltiness play nicely with the chocolate and caramel on the vanilla ice cream — a working man’s salted caramel brownie.”

Kahn agrees that Burger King is essentially “giving the people what they want…. Lots of people like bacon — and little bits of it on ice cream might make for a tasty treat. It’s not making the food healthier, though, that’s for sure!”

Marion Nestle, a professor of nutrition, food studies and public health at New York University and author of the blog Food Politics, is not surprised that the company would introduce a menu item that seems to defy all reasonable dietary guidelines. (The sundae clocks in at 510 calories with 18 grams of fat — more fat than the chain’s bacon cheeseburger.) “Burger King likes to position itself as envelope pushing — bigger, more caloric and more outrageous,” she says. “It’s hard to believe that this will be a big best seller, but it’s doing what it’s supposed to do: getting press attention.”

Whether that attention is good or bad, the product will generate word-of-mouth, says Wharton marketing professor Jonah Berger. “People love to talk about surprising, novel or interesting things, and ice cream and bacon are a perfectly unexpected combination.” He adds that “controversy can also increase word-of-mouth. Too much controversy … may turn people off, but a bacon sundae is just weird enough to spark a healthy debate. Some people will love it, most people will hate it, and the difference of opinion will generate discussion.”

What’s more, Berger notes that bacon has valuable cachet among a coveted demographic. “It’s an ingredient that stands out…. And it doesn’t hurt that men love it.” Stapleton also points out that aside from its novelty, the dessert has “guy appeal.” And Nestle says that the company’s bacon sundae campaign is “a marketing strategy that works with BK’s core customer base — young men.”

Perhaps Burger King is on to something by exploiting the seemingly powerful allure of bacon among younger males. On the June 2012 cover of the U.S. edition of Men’s Health magazine, one of the headlines reads: “Seduce Her with Bacon.” No joke.