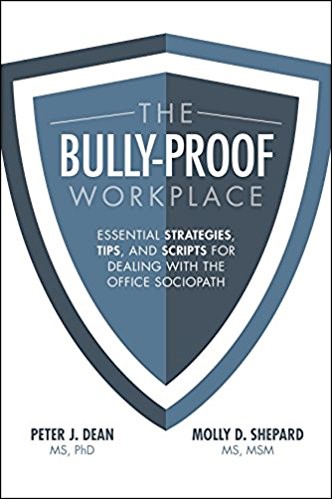 In more than a decade of running The Leaders Edge/Leaders By Design, an executive coaching and development firm, partners Peter Dean and Molly Shepard noticed a rising tide of bullying in the workplace. This unacceptable behavior can be as damaging to a company’s productivity as it is to employee well-being.

Dean and Shepard are authors of The Bully-Proof Workplace: Essential Strategies, Tips, and Scripts for Dealing with the Office Sociopath, a book aimed at starting a conversation about workplace bullying and finding constructive solutions. They discussed their book on the Knowledge at Wharton show, which airs on SiriusXM channel 111 on Wharton Business Radio. (Listen to the podcast on this page.) What follows are edited highlights of that interview.

Bullying Is All Grown Up

Bullying has moved from the playground to the workplace, a childhood behavior carried over by bullies who never learned to mend their ways. Shepard estimates that up to 85% of the clients she has worked with have been bullied, and their stories are shocking. “It is a problem, if not epidemic,” she said.

Although bullying seems to affect more women than men, Dean and Shepard contend it is not a gender issue; it is a power issue. “Eighty percent of the bullying is done by people who have a position of power over other people,” Dean said.

Institutionalized bullying can bring down an organization by causing morale to plummet along with productivity. A bullied employee could suffer harmful health effects or even decide to leave, forcing the company to invest time and money in a replacement.

How to Identify Bullying

While bullying may be present in the workplace, the topic is still largely taboo. Many employees who are being bullied feel powerless to do anything about it. They may not even recognize the behavior as bullying, passing it off as workplace teasing. That’s why Shepard and Dean have come up with a checklist to help identify and categorize bullying.

The first criterion is whether there is a target involved. Is one person repeatedly receiving negative attention from a bully? Is the interaction demeaning enough that the person starts to doubt his or her abilities? Is it affecting the work product?

The book breaks down bullying into four categories, including introverted bullies who try to manipulate the office environment and blockers who refuse to move up or support people with talent.

Bullying Can Become the Workplace Culture

Dean and Shepard pointed out that bullying in the workplace begets more bullying. In other words, it is a behavior that can pervade a culture if it isn’t curtailed.

“Just think of the target waking up in the morning and getting ready to go to work and not wanting to do that because they know they’re going to get bullied once again,” Dean said. “The job becomes the loneliest place in the world.”

“Eighty percent of the bullying is done by people who have a position of power over other people.”–Peter Dean

The consultants said a culture of bullying often begins at the top with managers, and then the behavior is copied by subordinates. “People see it as a way to move up, especially if their boss is like that,” Dean noted. “They emulate that once they get into a managerial position, unfortunately. And you know, they’re removed from really being recognized for that because of the subtlety of some of the bullying.”

What to Do About Workplace Bullying

Before going to human resources with a complaint about bullying, employees should keep a record of the incidents. Concrete examples of five or 10 incidents that directly affected your ability to do your job is enough proof for critical mass, the consultants said.

Then you need to figure out whom to talk to about the problem. “The first question you’re going to be asked is, ‘What happened?’ Demonstrate to me, if I’m HR or a boss or whomever in the organization, that this is true, that this has actually occurred,” Shepard said. “Even then it’s tricky. There’s not necessarily a safe place to go and vet this kind of thing.”

Companies can combat workplace bullying by developing a policy against it. With a policy in place that every employee agrees to, expectations are clear and communicated. And managers need to enforce it.

“The bottom line,” Shepard said, “is the manager has to call it as it happens, stop it in its tracks, know what it looks like, make sure it doesn’t occur again and take the bully out for either counseling or coaching or some form of intervention, and help the person who’s being bullied as well. But the manager needs to catch it, so it’s a very big responsibility.”