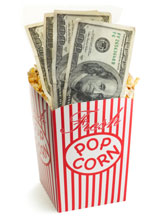 In another of his personal finance columns, Wharton professor of insurance and risk management Kent Smetters looks at the pros and cons of investing in a new futures exchange — approved last week by the U.S. Commodity Futures Trading Commission and sponsored by Cantor Fitzgerald investment bank — that will match buyers and sellers of future movie receipts.

The movie industry fared well during the current recession, generating record receipts of more than $10 billion in 2009. In fact, demand for movies typically increases during economic downturns even while the demand for most other goods and services falls.

For investors, movies represent a potentially attractive investment. The correlation between annual box office receipts and the Standard & Poor 500 Index is slightly negative, meaning that film investments can still do well while the rest of your portfolio suffers. Moreover, a good blockbuster like Avatar might also produce revenues that are multiples of its costs. There are not many available asset classes that exhibit these sorts of tradeoffs.

So, wouldn’t it be great if you could invest in a new film that you thought could be a real blockbuster?

Now maybe you can. On April 20, the U.S. Commodity Futures Trading Commission (CFTC) approved a new movies futures exchange that will match buyers and sellers of future movie receipts. The Exchange is sponsored by Cantor Fitzgerald, a New York City-based investment bank that became a household name several years ago when two-thirds of its employees were killed in the terrorist attacks of September 11, 2001. It has since rebounded with considerable success, in part due to differentiation through financial innovations like this one. Subject to final approval in June, the new Cantor Exchange will allow an investor to invest in his or her favorite movie by purchasing a share of its future revenue stream.

But not so fast. Hollywood studios are up in arms about Cantor Exchange’s approval (as well a similar exchange by an Indiana-based startup Media Derivatives). The Cantor Exchange is opposed by the Motion Picture Association of America (MPAA) and the Directors Guild of America. The major studios claim that the Cantor Exchange will lead to speculative bets, insider trading, and false rumors. A rogue employee might even bet against a film’s success and use his or her position to ensure its demise. Of course, such an act would be illegal, and similar concerns arise with other companies where it is possible to short the company’s stock. The difference here is that an employee might have more substantial control over the success of a single movie relative to the share price of a larger firm.

Last week, Blanche Lincoln, democratic senator from Arkansas and chairman of the Senate Agriculture Committee that oversees the CFTC, agreed with the studios and placed a ban on the Exchange in the most recent version of the financial reform bill that passed her Committee. Maybe coincidentally, Lincoln is the younger sister of Hollywood director Mary Lambert who directed Stephen King’s Pet Sematary and other films. The House of Representatives held hearings on April 22, 2010, where Cantor president Richard Jaycobs testified, as did MPAA president Robert Pisano.

Are the studios just looking to protect their own market power when it comes to movie financing? Are investors being cheated out of a decent way to diversify their portfolios?

Probably not. In fact, regardless of the true motivations of the studios’ resistance, the Exchange itself presents a valuable warning and general lesson for investors: Taking bets on the performance of individual contracts — in this case, specific movies — is often subject to the curse of “adverse selection” where only the bad quality product is actually offered for sale. Nobel laureate George Akerlof refers to bazaars likes these as “markets for lemons.”

The problem is not with futures exchanges themselves. In fact, futures exchanges are a good way for counterparties to hedge their risks. For example, farmer Joe plants his wheat crops long before the price of wheat is determined at harvest time. He is worried that the price of wheat will fall during the time in between. A producer of breakfast cereals, though, is afraid of just the opposite: Prices might increase, reducing the sales of brands which breakfast cereal producers have invested heavily in. So, there are mutual gains from trade if the two parties agree to a future sale price at delivery that is close to the price today. Both parties hedge against the price moving in the direction that is harmful to their own interests.

Trillions of dollars are traded each year in contracts like these for all sorts of commodities, including pork bellies, corn, oil and exchange rates on currency.

In theory, a movie exchange should allow a studio to also diversify its future risk by effectively selling some of its unpredictable future cash flow for guaranteed money today. In a break with most other studio executives, Lionsgate’s vice-chairman Michael Burns wrote to Congress that such contracts “would substantially widen the number and breadth of financing sources available to the motion picture industry by lowering the risk inherent in such financing.” Outside investors might like the opportunity to bear this risk because it gives them a potentially profitable investment while allowing them to further diversify their portfolio with a unique opportunity.

But a movie exchange fails to appreciate the economics behind a market for lemons. Whenever the product being offered for sale varies in quality — and the sellers have more information about its true value than buyers — the low quality variation is what tends to get sold. In other words, the Cantor Exchange could end up only selling movies that studios know are real lemons based on their internal market testing.

The reason why traditional commodities exchanges, like wheat or currency, work so well is that buyers and sellers have fairly equal information about the underlying risks. Moreover, the goods being traded are somewhat standardized, so that sellers can’t pick off only the low quality product to sell. In fact, marketers commonly refer to the “commoditization” of a product to suggest that it has very little quality differentiation.

But movies are not commodities. Indeed, studios have considerable private information about the quality of a movie before it is released. According to movie industry expert Tamara Rothenberg, that’s the reason why “film studios often embargo reviews for bad movies until after release or offer no pre-release screenings.” Wharton marketing professors Jehoshua Eliashberg and John Zhang have even developed their own sophisticated models that would help movie studios predict sales prior to release based on their internal testing. Armed with this information, studios with lemons would be incentivized to issue sell orders on the Cantor Exchange.

The nature of the flow of information is what ultimately dooms a movie exchange. The first piece of objective market-based information only becomes available once the movie is released. But by that point, it’s too late for a futures exchange to add much value since most of the uncertainty has already been resolved. Indeed, movies often sink or swim based on word of mouth and online reviews during the first weekend; in addition, first-week box office sales are highly predictive of future sales. According to Wharton marketing professor Eric Bradlow, “there is a lot of recent research on the ability of user-generated content to predict movie box office performance.” Twitter chats during the first weekend, he adds, appear to be more predictive than the Hollywood Stock Exchange, a fantasy movie trading game, also owned by Cantor.

Instead, the new Cantor Exchange will likely encourage studios to simply “pump and dump” their lemons. Wharton’s Justin Wolfers, professor of business and public policy and an expert on prediction markets, is another skeptic of the Cantor Exchange. “Most major studios are well diversified. They make dozens of movies. The studios can also diversify and spread risk in other ways, by taking on more partners or restructuring the contracts with their stars.” Indeed, private equity funds already provide capital directly to studios. They attempt to reduce the lemon problem by offering to fund a large slate of movies (pdf) rather than allowing a studio to simply pick the movies to be financed.

The market for lemons raises serious issues of transparency and is one reason why mortgage-backed securities like Collateralized Debt Obligations failed so miserably, leading to a collapse of the larger financial system in 2008. CDOs can vary substantially in the quality of the mortgages they hold. The seller — in this case, the bank that originated the loan — has more information about the quality of CDOs than many buyers. Not surprisingly, ample evidence exists that the mortgages that were resold to outside investors in the form of CDOs were more likely to fail (pdf) than mortgages that the originating banks simply kept on their own books.

Going to the Dogs

But suppose that you want to invest in movies while avoiding lemons. It’s actually pretty hard as an individual investor. You cannot directly invest in any of the major “Big Six” studios. Each one is owned by a larger parent company. For example, Universal Studios is owned by General Electric but its impact on GE’s return on equity is very small. DreamWorks, the studio behind the Shrek franchise, is an exception since it offers a more direct investment in its movies, but its price has already doubled during the past year. So unless you have access to a related private equity fund, there is only limited opportunity to directly invest in movies.

The Cantor Exchange, therefore, is appealing in that it tries to “democratize” movie investments. But, as Wolfers puts it, “investors have got to be worried that studios would only want to short their dogs.” Indeed, movie financing is probably best left to the pros.

The general lesson is that, as an individual investor, you should be suspicious of investing in any individual contract where the seller has a lot more information than you. Instead, simply make sure that your portfolio includes some recession-proof stocks. Companies like Wal-Mart, McDonalds, Hasbro, Yum! Brands, and Procter and Gamble often see higher (or still fairly robust) revenues during recessions. But don’t overdo it: These revenue streams might also fall as the economy rebounds.