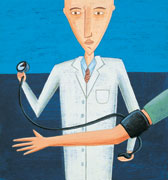 While the possibility that millions of uninsured Americans might soon have access to health coverage may conjure images of patients stacked up in hospital hallways or waiting for months for an MRI, the most likely stress point in an expanded health care system will involve the family doctor.

The supply of primary care physicians is already tight in some parts of the country, and finding a general practice doctor will probably become even harder if the pool of insured Americans expands. “The biggest chokepoint in the health care system will be the availability of primary care doctors,” says Wharton health care management professor Mark V. Pauly. “The physician bodies just aren’t there.”

He and other Wharton School health care experts say that existing infrastructure — hospitals beds and technology, for instance — will likely be able to accommodate any influx of patients, but expanding the physician workforce to meet added demand will take both time and a concerted effort. “If they are going to use health care reform to emphasize preventive medicine, it’s not clear that they have thought through whether there is adequate capacity in primary care,” notes Kevin Volpp, a Wharton professor of medicine and health care management, and director of the Leonard Davis Institute of Health Economics’ Center for Health Incentives. “That’s a bigger issue than hospital beds.”

The American Association of Medical Colleges (AAMC) projects that even if the number of physicians remained the same, there would be a shortage of 124,000 doctors of all types by 2025, although the number could climb to as high as 159,000 should demand for doctors pick up along with wider insurance coverage.

Experts are particularly worried about a dearth of doctors to focus on primary care services, including routine checkups and sick visits. There are already primary care physician shortages in some rural areas, as well as in more populated communities. Merritt Hawkins & Associates, a physician recruiting and placement firm, reported in June that from April 2008 to March 2009, it had more requests for family doctors than for any other type of doctor. Requests for primary care doctors were up 23% compared to a year earlier.

“Virtually every hospital or large medical group in the United States would be happy to add a family physician or general internist. There simply are not enough primary care doctors to go around,” Merritt Hawkins president Mark Smith wrote in a statement accompanying the firm’s report.

The AAMC wants to increase the number of slots at U.S. medical schools by 30%, both through the expansion of existing classes and the creation of new medical schools, but it takes time to educate and train doctors — four years of medical school and three or more years of residency, perhaps followed by a fellowship. “Even if we could magically expand medical schools in the next year, it would be years before we have more doctors,” Pauly says. And even if more students are enrolled in medical school, it won’t be easy to reverse a steady trend away from primary care practice in favor of specialty fields.

The various health reform scenarios being debated on Capitol Hill place some emphasis on bolstering primary and preventive care. The idea — a familiar theme heard especially in the early days of HMOs — is that if everyone had a so-called “medical home” with a primary care physician, they would be more likely to get timely and preventive care, thus avoiding more costly trips to specialists and emergency rooms. Uninsured Americans don’t necessarily go without surgery or care when they get sick — but they may put off treatment or be seen by a doctor in the emergency room instead of the doctor’s office.

Costs Are Still an Issue

President Obama has said he would like to wrap up health care reform legislation by summer’s end, but that may be tough as more questions arise over the cost of even a modest expansion of health insurance coverage. The Obama administration and other supporters of the various proposed initiatives have always presented reform as a two-goal effort — to both expand access to the nearly 50 million Americans without health coverage and to reign in costs. But on July 16, Douglas Elmendorf, director of the Congressional Budget Office, reported that the various proposals being backed by Democrats not only would fail to clamp down on costs, but would probably increase federal health care spending.

“In the legislation that has been reported, we do not see the sort of fundamental changes that would be necessary to reduce the trajectory of federal health spending by a significant amount,” Douglas Elmendorf told the Senate Budget Committee. “On the contrary, the legislation significantly expands the federal responsibility for health care costs.”

His comments were latched onto by Republican lawmakers, and even some Democrats, who say that expanding insurance coverage is, in principal, a good idea, but not at the expense of higher taxes and a mounting deficit, especially in a sagging economy. It has been estimated that Democratic plans to expand coverage would cost about $1 trillion over 10 years.

But the issue of a looming doctor shortage will have to be addressed, no matter what shape reform takes, experts say. Not only are some patients already having trouble finding a doctor in some parts of the country, but they are having to book far ahead. According to a recent survey by Merritt Hawkins, the average wait time to see a family doctor for a routine physical ranged from seven days in Miami to 63 days in Boston. In eight of 15 metropolitan areas surveyed by the company, it took at least 14 days to be seen by a family physician. The report noted that the long waits documented in the Boston area may be due to legislation in Massachusetts that expanded coverage for the uninsured.

“Long appointment wait times in Boston also may signal what could happen nationally in the event that access to healthcare is expanded through health care reform,” according to the Merritt Hawkins report. “Increased demand [due to] improved access to care for approximately 47 million uninsured people can be expected to extend doctor appointment wait times in many markets.”

The Lure of Specialties

Today’s medical school students are attracted to specialty fields instead of primary care for a number of reasons. For starters, they are piling up tremendous debt in the pursuit of an MD or DO (doctor of osteopathic medicine) — $200,000 in loans is not unheard of — and then looking at the realities of a labor market that rewards high-tech, procedure-based medicine. Merritt Hawkins noted in the June report that the average salary offered to family physicians was $172,000 in 2007-2008, compared to $300,000 for an anesthesiologist and $360,000 for a hematologist/oncologist. Some other specialties commanded even more.

Medical students are also veering away from primary care practice for lifestyle reasons, including wanting more time for family and leisure. A radiologist, for instance, can work far fewer hours than a pediatrician or general internist and still make twice the salary. There’s also a “wow factor” at work. Today’s medical students were raised on gadgets, and they may understandably be attracted to fields that use computers, lasers, robotic tools and other technology, rather than embracing a future filled with patients with colds, high cholesterol and other everyday concerns.

Richard A. Cooper, a professor of medicine at the University of Pennsylvania and a senior fellow at the Leonard Davis Institute, says that some of the increased demand for physician services likely to be generated by an expansion of insurance coverage could be absorbed if doctors already in practice put in more hours, but that approach can only go so far. He suggests that the solution, from both an efficiency and economic standpoint, will have to involve “looking downstream” at the roles played by others in the health care system — physician assistants, nurse practitioners, nurses, nursing aides and technicians.

Cooper, himself an internist, points out that while it may seem to make sense to encourage more students to go into primary care, there’s a downside to that strategy because there will also be a need for more cardiologists, orthopedic surgeons and geriatricians as the population ages. “To make one kind of doctor, you have to give up making something else,” he says. Primary care doctors will have to become more like specialists, he predicts, using their time to handle complex cases and allowing their staff to see to more routine patients.

“We have to train people for rural medicine. We have to have people who can do oncology and care for the aging population,” Cooper says. Whether they’re called primary care doctors or whatever, “we need more doctors to do what doctors do.”