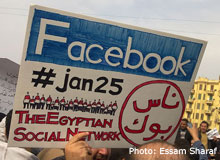 Wael Ghonim almost sounds apologetic about his central role in helping plot Egypt’s future. But a year after the fall of the government of President Hosni Mubarak, his words continue to resonate beyond the Tahrir Square protests.

Ghonim, 31, was the moderator of the Facebook page titled “Kullena Khaled Said” (“We Are All Khaled Said”), which some credit for providing the spark for the Egyptian revolution. Ghonim was imprisoned and became the revolution’s public face after his release. The former Google marketing executive might be better suited to help inspire a budding entrepreneur community throughout Egypt, but circumstances have thrust him into the political forefront as Egyptians navigate the maze of democracy. Meanwhile, he has utilized his enterprising spirit in the political realm to bring factions together for a common cause.

“The revolution is a process and not an event,” he said during a panel discussion at Stanford University on the first anniversary of his release from jail for his role in sparking the protests. “I personally [took] to the streets not to replace a dictator with another one; I took to the streets because I believe Egyptians have been denied the right to choose whoever governs them.”

During the celebrations following Mubarak’s departure, Ghonim realized that Egypt was at the beginning of a long struggle. A majority of Egyptians know nothing other than dictatorship and military rule, leading to confusion and chaos during the embryonic stages of democracy. “The fact is [that] we kind of opened a can of worms,” he said. “It’s not going to happen in a few months.”

Ghonim regrets the lack of foresight in those intoxicating days after Mubarak abandoned power on February 11 last year, and the Supreme Council of the Armed Forces filled the void as the interim government. But Egyptians such as Ghonim now have a sense of urgency about creating a new, democratically elected government to benefit everyone. “We need to have one goal, as we had for the 18 days [of protest that began in January 2011],” he said. “At the current stage, we don’t discuss anything but the transition of power. This is our only priority.”

Ghonim recently visited the United States on a whirlwind book tour that included the panel discussion at Stanford sponsored by the Muslim Student Awareness Network and Islamic Society of Stanford University, and TechWadi, a Silicon Valley non-profit that promotes entrepreneurship and cross-border partnerships with the Arab world. Proceeds for his memoir, Revolution 2.0: The Power of the People Is Greater Than the People in Power, will go to a technology-based NGO Ghonim is starting in Egypt to fight poverty and provide education.

At Stanford, Ghonim focused mostly on Egypt’s future instead of his 11 days of incarceration during the battles in Tahrir Square. “It [was] not a Facebook Revolution,” Ghonim said. “It was the people’s revolution…. If this revolution did anything, it brought dignity back to the Egyptians. It’s very hard to think that in a few months people are going to … accept the dictatorship again. It’s not going to work.”

An immediate challenge for Egyptians, he noted, is the need to strike a balance between getting the political situation right while stopping the economy from collapsing. “It is very hard to assume the economy is going to rise during [this] transitional period, because most foreign investments are not going to come into a country where people don’t know what is going to happen in the next few months…. We’re not going to see democracy tomorrow. It’s going to take time. It’s going to be hard. We have to be patient.”

Ghonim added that Egyptians can no longer sit on the sidelines and complain about corruption and economic woes without participating in solutions. The country cannot expect a singular leader to rise from the rubble to save it. “People have managed to collaborate and work together without having a single leader or group of leaders who would say what should happen now. I call on every Egyptian to do something, to think of something.”