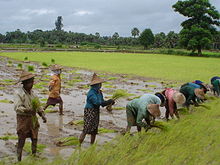 There is renewed promise of Western companies doing business in Myanmar, if current moves lead to the U.S. lifting sanctions it imposed in the 1980s against the military-ruled country. Last week, President Barack Obama phoned Aung San Suu Kyi, Myanmar’s pro-democracy leader, and today, secretary of state Hillary Clinton began a visit to the country that includes meetings with President Thein Sein and Suu Kyi.

According to The Wall Street Journal, Myanmar is “rich in oil, gas, timber and gems and has the potential to be a major rice and seafood exporter. Its tourism industry can rely on 900-year-old temple complexes and beaches to rival nearby Thailand, which attracts 15 million or more visitors a year.” But its poverty, corruption, working conditions and lack of infrastructure will make it a tough sell for U.S. businesses, say Wharton faculty and others.

Oil and gas fields in northern Myanmar could be the biggest attraction, but any products that require a significant amount of transportation will need big investments in ports, roads and trains before they are exportable, says Edwin Keh, a lecturer at Wharton. A former chief operating officer of global procurement at Walmart, Keh has also previously consulted with voluntary organizations working in Myanmar. A handful of French, Chinese and Indian oil companies operate in the country’s nationalized oil industry — but no U.S. companies.

Most reputable companies that deal in gemstones wouldn’t be swayed by Myanmar’s rubies and sapphires because the conditions in which they are mined are “deplorable and horrible,” says Philip Nichols, a Wharton professor of legal studies and business ethics. “The political openings we are witnessing in [the country] don’t change that fact.” But Keh notes that there are ways to address that issue. “If the government can partner with a domestic, regional or international mining partner and incorporate modern methods, I see nothing but upside.”

According to Keh, tourism is a “tremendous opportunity” with Myanmar’s natural beauty, beaches and archaeological and religious points of interest, but here again it needs hotels, roads, trains and cars. When he last visited the country three years ago, he noticed it was emerging as a “modern-day hippie trail with lots of backpacking young Westerners.”

Corruption is a major obstacle in Myanmar, but the same is true for “all of its neighboring countries, with the exception of Singapore,” Keh says. “Poverty is a reason for some of these issues. But there are also some historical challenges — it is part of the Golden Triangle [for illicit opium trade], so there is smuggling, gambling, prostitution and trade in protected species.”

Colonial Burma was an attractive destination in the 1930s, recalls Keh. “It was the world’s second highest rice exporter, had a well educated and cosmopolitan population and had the highest literacy rates of any Asian country. It could have [become] a very large Singapore,” he says. But “devastating economic policies” since the 1960s made the country “a basket case,” he adds. Its teak, mahogany and rosewood were much sought after, but “wholesale clearance of mangroves” has hurt that opportunity.

Today, the resource-rich, fertile country has the opportunity to revive its agrarian economy, but it’s unlikely that the likes of Walmart would rush to invest in Myanmar, says Keh. “The appetite in the West for developing markets and resources overseas is still there, but investors would go for low-hanging fruit. Myanmar has proven difficult to work with, and may be bypassed because other opportunities take its place.” A recent example is Walmart’s purchase of a 51% stake in South African retailer Massmart, he says.

Myanmar has a tiny economy worth about $40 billion, or one-tenth of metropolitan Philadelphia, says Frida Ghitis, a columnist for World Politics Review and The Miami Herald who has written extensively on the country. “You can look at it in one of two ways: Such a small economy is hardly worth [the fuss over sanctions], or that it is such a small economy that there is so much potential.”

Freer economic ties may not result in specific gains immediately, but could bring about a broader “political rapprochement,” says Nichols. “It also means Burma is not driven into the arms of China and has a more rational set of economic relationships.” Further, it could make Myanmar less of a liability and more effective within ASEAN, the Association of Southeast Asian Nations, he adds.

Keh and Ghitis don’t see the current moves emboldening a Walmart or a Western fast food chain to open shop in Myanmar, but they note there are signs of an appetite for Western goods among its people. Ghitis, for one, recalls spotting a Rangoon restaurant called “McDonald’s” when she last visited the country 10 years ago.