The latest upswing for Alphabet, parent company of Google, comes as fellow tech giant Yahoo is mired in increasing challenges to stay afloat. In this opinion piece, author and branding expert Denise Lee Yohn discusses the stark differences in, and impact of, each company’s approach to branding. Yohn is author of the book, What Great Brands Do: The Seven Brand-Building Principles that Separate the Best from the Rest. She is also the former vice president/general manager of brand and strategy for Sony Electronics’ brand office and former marketing leader and analyst for Jack in the Box restaurants and Spiegel catalogs.

Less than two weeks after Google’s parent company, Alphabet, became the world’s most valuable public company, Yahoo put its core business up for sale. The contrast between the two companies couldn’t be sharper.

While many theories have been offered to explain Yahoo’s downfall in light of Google’s ascent, I would like to suggest that the difference in the companies’ brand approaches may be the most illuminating. While Google has mastered brand strategy and management, Yahoo has lacked a definitive brand purpose and future-oriented brand vision — and these deficits have led to key brand missteps including introducing an impotent visual identity.

Google’s brand mission is well-known and well-established: to organize the world’s information and make it universally accessible and useful. Founders Larry Page and Sergey Brin crafted the mission in the company’s early years and, ever since, the organization has stayed committed to it. The statement is displayed front and center on Google’s “About” page and regularly appears in company communication. It has been used by many as a robust descriptor for the company and by employees as the driving force behind practically everything they do.

Yahoo’s brand mission isn’t so clear — actually it isn’t to be found. An official mission statement doesn’t exist on its site, and the statements I did uncover elsewhere were varied and often conflicting. The company lacks both a definitive, compelling description of what it does and why it does it. 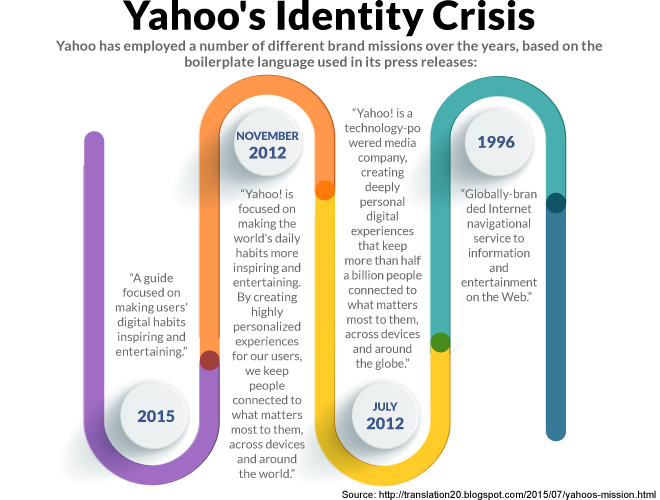 According to one researcher who tracked Yahoo’s boilerplate for press releases, the company’s self-description changed 24 times in 24 years.

When Marissa Mayer took the reins at Yahoo, she was hailed as a visionary leader who would rescue the floundering company. But she failed her most important task: explaining — to investors, customers, employees and the world, really — why Yahoo should continue to exist.

To be fair, the company was started with a somewhat problematic mission. Two electrical engineering students at Stanford, David Filo and Jerry Yang, created it as a guide to keep track of their personal interests on the Internet. But over time the world outgrew the need for a single place to find useful websites, and one after another, Yahoo’s leaders failed to articulate an alternate enduring reason for the company’s being.

Mayer eventually tried. Late last fall, she commissioned a book to be distributed to Yahoo employees. It contains stories, images, quotes and messages about Yahoo’s past and its future, along with a new statement of the company’s mission, “To be an indispensable guide to digital information, yours and the world’s.” But it’s not a pithy point and it’s probably too late — and given the company’s track record, I wouldn’t be surprised to see it change again.

“While Google has mastered brand strategy and management, Yahoo has lacked a definitive brand purpose and future-oriented brand vision.”

Of course, mission statements, in and of themselves, are not really all that important. But organizations do need a clear and compelling sense of purpose. Leaders of great brands use brand purpose as a compass and engine for their organizations — driving, aligning and guiding everything they do. Without the long-term commitment to a definitive purpose, Yahoo has been rudderless.

Reacting at Yahoo vs. Anticipating at Google

Yahoo has also been vision-less. While many credit Mayer with leading the company’s transition to mobile, the shift was born out of necessity to catch up with the world, not out of opportunity to change it. In fact, Yahoo has been operating in reactive mode for the last decade. Even the new homepage design it recently introduced is merely an incremental evolution of its past designs and its latest attempt to mimic the popular features of other sites.

Yahoo doesn’t have a brand vision that would propel it forward, leapfrogging over existing realities and pushing the limits of what is possible. Mayer once described her vision for the company’s future saying, “As digital content becomes richer, as search and mail become richer, we need to change what the format of that guide is, as we move to mobile, wearables, TVs, cars, and all the other formats in the future. So, we’re focused on search, communications and digital content, all of which we think are incredibly important parts of that role as a guide, and those are the products that we’re investing in and building on.” Her statement merely reflects the company’s reactive stance to changes that it must address — not new growth opportunities it is creating for itself.

Compare this to the way Larry Page described his vision for the future when he introduced Alphabet as the holding company for Google and other entities: “We’ve long believed that over time companies tend to get comfortable doing the same thing, just making incremental changes. But in the technology industry, where revolutionary ideas drive the next big growth areas, you need to be a bit uncomfortable to stay relevant.” Alphabet, he went on to explain, is intended to give more support to businesses “far afield” from Google’s main Internet products, including glucose-sensing contact lenses, drone delivery and driverless cars.

“Mission statements, in and of themselves, are not really all that important. But organizations do need a clear and compelling sense of purpose.”

The introduction of Alphabet itself embodies the company’s future orientation and brand vision. Separating the Google brand from the organization’s more far-reaching efforts allows Google to remain aligned and focused on its brand mission and “un-hinders” from efforts that should have their own missions, such as Jigsaw, the new brand for the organization’s innovation lab. Having ditched the former name, Google Ideas, Jigsaw can freely pursue its mission — “to use technology to tackle the toughest geopolitical challenges, from countering violent extremism to thwarting online censorship to mitigating the threats associated with digital attacks” — without diluting or derailing the Google brand.

This kind of brand separation would have been useful for Yahoo to have established before the dire situation it now finds itself in. A separate brand might have protected Yahoo from the doubts involved with its decision to spin off its stake in ecommerce giant Alibaba, as well as the embarrassment when it reversed itself and shelved the plan. And now, the move to put the core business up for sale calls into question the future of the Yahoo brand as a whole and therefore the viability and vitality of any of the units that would remain after such a sale.

Again, it’s too late. Yahoo finds itself behind the brand eight-ball because it hasn’t created a future-oriented brand vision.

Without a powerful brand purpose to ground the company and a visionary brand ambition to advance it forward, it’s no surprise that Yahoo missed a critical opportunity when it changed its logo back in 2013.

Not only was the new logo design a mere update of the old version, but it also failed to communicate anything of substance. In her announcement of the new logo, Mayer said, “We knew we wanted a logo that reflected Yahoo — whimsical, yet sophisticated. Modern and fresh, with a nod to our history. Having a human touch, personal. Proud.” She went on to describe the design details of the new logo, explaining, for example why it didn’t incorporate straight lines, but she said nothing about how the change achieved any strategic objective or reflected any substantive change in the brand experience. Kathy Savitt, the company’s chief marketing officer at the time, explained that the new logo was intended to reflect the company’s “reimagined design and new experiences.” But I couldn’t figure out what she was referring to since no new experiences were incorporated into the logo or vice versa.

“When a company knows what it stands for and where it is going, it can focus its people and resources and have clarity in a range of decisions.”

While Yahoo’s identity refresh was simply about design and brand personality, Google’s new logo sent a clear message about the brand’s updated functionality. When Google introduced a sleeker, brighter, animated logo last year, it explained, “Once upon a time, Google was one destination that you reached from one device: a desktop PC. These days, people interact with Google products across many different platforms, apps and devices. Today we’re introducing a new logo and identity family that reflects this reality and shows you when the Google magic is working for you, even on the tiniest screens.” Moreover, Yahoo’s change seems self-serving whereas Google’s customer-orientation is clear.

The contrast between Yahoo and Google’s new visual identities illuminates the impact of brand purpose and vision. With them, visual identity changes are imbued with meaning and value; without them, they’re merely cosmetic exercises.

When a company knows what it stands for and where it is going, it can focus its people and resources and have clarity in a range of decisions. Not all of Yahoo’s problems originate from its brand failings, but if Google provides a fair comparison, it’s clear that more attention to Yahoo’s brand purpose and vision could have helped.