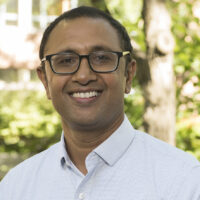 With its fast pace of growth and immense potential, India is high on the itinerary of business and political leaders across the world. Recently, a team of Wharton faculty visited the country to learn more about how India is evolving and finding a place within the global economy. Leading the seven member team were Ziv Katalan, a professor of operations and information management and director of Wharton Global Initiatives; and Anjani Jain, professor of operations and information management and vice dean and director of Wharton’s graduate division. The group was in India as part of Wharton’s Faculty International Seminar (FIS). The professors spent five days meeting with business and political leaders across various sectors in Mumbai, Hyderabad and New Delhi.

“The idea is to give our faculty an opportunity to get exposure to business leaders, government officials and colleagues in academia in interesting parts of the world,” said Katalan. The visit is expected to lead to research opportunities and help develop new curricula at Wharton, in addition to providing the faculty with exposure to a large number of prominent leaders in India. “No matter how much you read and study from a distance, there is no substitute for being on the ground and talking to people,” Jain noted.

The FIS had its beginnings in the late 1980s with visits to Japan and Korea. The program went on a hiatus for a while and has now been relaunched by Harbir Singh, a management professor who became Wharton’s vice dean for global initiatives in September 2008. Last year, faculty teams went on two international seminars — one to China and the other to Vietnam and Cambodia. Earlier this year, a group travelled to Brazil. The India team comprised Patricia M. Danzon, a professor of health care management and insurance and risk management; Daniel A. Levinthal, a management and corporate management professor; Morris A. Cohen, a professor of manufacturing and logistics and operations and information management; Kartik Hosanagar, a professor of operations and information management, and Santosh Anagol, a professor of business and public policy. The trip was Danzon, Levinthal and Cohen’s first visit to India.

Wharton faculty met with government officials including Kapil Sibal, cabinet minister of human resource development; Ghulam Nabi Azad, cabinet minister of health and family welfare; D. Subbarao, governor of the Reserve Bank of India, and C. Rangarajan, chairman of the economic advisory council to the Prime Minister. They also talked with executives from Indian companies such as the Tata Group, Hindustan Unilever Ltd (HUL), HDFC Bank, Bharti Enterprises, GMR Group and Apollo Hospitals, in addition to academics from the Indian School of Business and many others.

A ‘Resurgence of Positive Sentiment’

Experts discussed India’s evolution from having a closed and protected business environment to a more open economy today, and the opportunities and challenges presented by the current state of the country. While observers agreed that India has tremendous growth potential, they also cited the need to develop the country’s physical and social infrastructure, increase agricultural productivity and create jobs while also providing skills training to the workforce.

Commenting on the outlook for the Indian economy, Subbarao suggested that there is a “resurgence of positive sentiment” and that growth is becoming “consolidated and broad based.” Subbarao also explained why, despite having no exposure to tainted assets and with exports only accounting for 15% of the country’s gross domestic product (GDP), India got hit by the recent global financial crisis. “India is now closely integrated with the rest of the world both by way of financial integration and trade integration.” According to Rangarajan, “While India can look at an 8% growth based on domestic opportunities, for a 9-10% growth [to occur] the external environment has to be hospitable.”

Subbarao also noted the need for India to develop its manufacturing capability. In the 1990s, India defied the development paradigm, bypassing manufacturing growth in the jump from an agriculture-focused to a service-dominated economy. “We all celebrated this shift. But maybe it was incorrect and catches up in the long term,” he said, adding that, in the coming years, millions of people in India are expected to move out of the agricultural sector and that jobs will have to be provided for them. Currently, around 60% of India’s population makes a living from agriculture, but the sector contributes only around 20% of the country’s GDP. Services alone, Subbarao noted, will not be enough to create the jobs that will be needed and “we will have to depend on manufacturing to provide these jobs.” Rangarajan, however, suggested that services will play a key role in creating new employment opportunities because, until now, “the service sector has only absorbed the growing population in the urban areas. It has not touched the rural areas as yet.”

Sibal described the government’s efforts to create educational infrastructure and the urgent need for skill building and other efforts to make India’s youth employable. Global educational institutions will have to look at building a presence in India, he noted, because “educational institutions will have to gravitate where human resources [are] available.” According to Sibal, India is uniquely placed for attracting investments in education because there is a “hunger for education in emerging economies and a strong commitment to education at the family level.”  Azad detailed the unique challenges facing India’s health care sector because of the need for enormous scale. One way the health ministry was looking to address the issue is through public-private partnerships, he stated.

Playing in a Global Arena

Business leaders discussed how Indian companies are making a name for themselves in the global arena. Companies in India, both of Indian origin and multinationals, are not only making products that cater to the specific needs of Indian consumers, but are also introducing new products in markets across the world. Ravi Kant, vice chairman of Tata Motors, said that the Tata Nano car was originally developed for the Indian market. But now the company is exploring opportunities to introduce the vehicle to consumers in Europe and the United States. Nitin Paranjpe, managing director and chief executive officer of HUL, pointed to the Pureit, a water filter the company launched in India a few years ago. To overcome the constraints of power and water supply in the country, Pureit does not require electricity or pressurised water. Now HUL plans to bring Pureit to Latin America within a year and “take it to 50 countries over the next three to five years,” said Paranjpe.

Companies entering the India market in sectors including fast-moving consumer goods (FMCG), telecom and retail must contend with intense competition and price wars, Paranjpe noted, but “you can’t be a big global presence 50 years from now if you don’t have a presence in India and China. Those companies who have entered this market late are making up for lost time by pumping in huge amounts of investment. It may seem irrational from the outside, but from their standpoint it is very rational.” A few years ago, multinationals thought that “India had potential, but was risky,” suggested Milind Barve, managing director of HDFC Asset Management. “The big change now is that everyone believes that it is risky not to be in India.” According to Barve, India is currently enjoying a “stability premium,” where every political party recognizes the need for economic reform. Where India lacks compared to China, he added, is in the pace of reforms.

Wharton’s Cohen described the India as “the Wild West,” noting that “people are inventing new businesses from scratch, be it in products or services, and it seems that the opportunity to do that is greater here than in the U.S. This is an old country but in many ways it seems like a pioneer.” Cohen predicts that the service sector might play an even greater role in India’s future growth because the restructuring of the world economy is resulting in increasing outsourcing of manufacturing and logistics. In many industries, he noted, all production needs come from a few key suppliers in countries like Taiwan or China. With everyone using the same source, or a comparable source, for manufacturing it is very difficult to differentiate quality at the product level. Cohen sees similar trends now occurring at the product design stage, where even the latest technology and high-priced and sophisticated products become commoditized very quickly. To that end, Cohen suggested that what sets a product apart in the future will be the “service value” that the customer perceives. “The non-material aspects of a product that do not require a physical presence — like customer relationships [and customer] service, for example — fit very naturally into the [economic strengths] of India.”

India’s health care sector is experiencing “growth and expansion in the private sector at every level and also a lot of rethinking of policy at the government level,” Wharton’s Danzon noted, but the country needs to develop its own unique model of service. “India is looking at a public system for the less affluent population and a higher-quality and higher-cost private system for affluent people. Overlaid on this is India’s state and federal component. There is not a single existing model that India can follow.” Can the model that India develops be followed by other countries? Not necessarily, said Danzon. She pointed out that while there are some basic lessons and designs of health care systems that can be transported across countries, there are also culture-specific and political system-specific issues that need to be taken into account.

On the education and employability front, Jain noted that while there is a proliferation of colleges and vocational training institutes in the country, especially in the cities, they remain of uneven quality. “The political and business leaders clearly do recognize that this as a big challenge. How well they collectively find solutions will determine how well India can reap the demographic dividend.” Jain visits India regularly and pointed to the fast pace of change in the country. “Things that happened just two or three years ago are already spoken of as a part of history. This visit gives a great sense of what is happening on the ground right now and that is very exciting.”