In his new book The Platform Paradox: How Digital Businesses Succeed in an Ever-Changing Global Marketplace, Wharton management professor emeritus Mauro Guillén highlights a key incongruity in our new world: Most platforms considered to be successful have triumphed in only some, rather than all, parts of the world. There are very few truly global digital platforms. (Editor’s note: Guillén is now dean of the Cambridge Judge Business School.)

Brett LoGiurato, senior editor at Wharton School Press, sat down with Guillén to talk about his new book, including how the COVID-19 pandemic has accelerated digitization and forced companies like Airbnb to pivot and adapt; how platforms like Tinder and Uber have used local advantages to grow rapidly in different countries; and the possibilities and limits to global expansion, as illustrated by companies like Zoom and Skype.

Brett LoGiurato: I wanted to start by asking you to explain the concept of the platform paradox and how digital platforms are changing the rules of competition in the global economy.

Mauro Guillén: As you know, digital platforms are all around us, especially after this pandemic. But even before the pandemic, we were using digital platforms to play, to entertain ourselves, to work, to learn, and of course to shop. Platforms have taken over the global economy. Established companies have been either setting up a presence on digital platforms, or they have created their own digital platforms.

The title of the book, The Platform Paradox, refers to something important, which is that although the internet is a global medium, although you can use the internet and get information from all over the world, most digital platforms are actually not global, in terms of the scope of their operations. They don’t have users everywhere in the world. This may come across as being counter-intuitive, but consider platforms such as Uber, or platforms such as Facebook.

While they are very strong in some parts of the world, in others there are competing platforms that actually have more market share, more users than they do. That’s the paradox. How is it that these platforms are using a global medium, but very few of them have actually a truly global footprint?

“How is it that these platforms are using a global medium, but very few of them have actually a truly global footprint?”

LoGiurato: What is an example of a truly global digital platform?

Guillén: It’s very hard to produce one. Consider, for example, Google. It’s undeniably the most important search engine in the world. It has about 90% global market share. But it has very little presence in some markets around the world, because local users have little interest in using Google as a search engine, or in some cases because of government regulations. For example, Google doesn’t operate in China.

Guillén: The dynamics of platforms, the way in which they grow, has a lot to do with network effects. A very basic definition of network effect is that each additional user on a platform makes the platform more valuable to all of the other users on the platform. The classic example is the telephone. The more people who have a telephone, the more people you can communicate with. The value of the telephone network increases with each additional user.

The second important classification of network effects, especially for addressing the network paradox, is the geographical level at which the network effect takes place. This can range from the very local level, to the national, to the regional — like Europe or Latin America — to the truly global. Network effects are fundamental for us to understand if a digital platform is to grow and be successful in the global economy.

LoGiurato: I want to talk some more about the examples that you cite in the book. One has become very common in a lot of people’s lives during the pandemic: Zoom. How has it surged to compete and lead in a space that, as you say in the book, was once dominated by Skype?

Guillén: Zoom is certainly one of the most amazing success stories over the last 12 months, since the beginning of the pandemic. They had a product that was easy to use. If you remember, they also made it available for free at the beginning of the pandemic for groups or events below a certain number of people. On top of that, it’s extremely intuitive. You can also incorporate other kinds of applications into it. You can easily share, for example, your presentation.

“Zoom is certainly one of the most amazing success stories over the last 12 months, since the beginning of the pandemic.”

But Zoom came out of nowhere. Twelve months ago, it wasn’t widely used. But all of a sudden, we found ourselves in this situation in which nobody could go to school, nobody could commute to the office, so we needed a platform to be able to learn, to be able to work. Zoom essentially had the right product at the right time.

LoGiurato: Another example you’ve mentioned is Uber, which, as you illustrate, uses local network effects to its regulatory advantage. But it also means that it has been hard for Uber to grow in certain areas. Can you explain that?

Guillén: Uber is a two-sided platform. You have drivers, and you have users — meaning riders. You also have people who want something delivered to their homes. Uber, by definition, is not a company that benefits from global network effects, not even regional or national. In the case of Uber, the relevant network effects are strictly local.

For example, if you’re leaving your home, and you want to make it to the railway station, you don’t care about how many Ubers are available in some other city in the world. You only care about how many drivers are available to you at that moment in your immediate vicinity, perhaps within 10 or 12 city blocks. The network effects in Uber’s case are completely local, which essentially means that Uber has to win the battle in every location in the world. And that’s why we see a proliferation of ride-hailing applications. It’s not just Lyft here in the United States. You have the market leader in Latin America being Cabify. The market leader in China is Didi. When you go to Southeast Asia, it’s Grab, and so on.

When local network effects predominate, the outcome, in the end, could be that different types of platforms are strong or the strongest in different locations in the world. Uber, with all of its might, with all of its fame, has been struggling in terms of establishing itself in locations in which another platform — typically a local one — has already gained enough market share to dominate the local network effects.

LoGiurato: One of the examples from the book I was fascinated by as a pretty early Internet user was Monster.com, which was perhaps the first big internet job board. Can you talk about how LinkedIn came in and took over that space?

Guillén: Monster.com dominated the early stages of online or digital job services websites and platforms. It was a very intuitive, straightforward idea. Instead of printing job opportunities and people reading about them in the newspaper, they would actually make them available online.

What Monster.com didn’t realize was that people didn’t just want to learn about jobs that were available to them. They wanted to be able to use a digital platform about the labor market, about their professional careers, even when they were not planning to find a new job.

“No platform in the world can succeed unless it understands the network effects underlying its potential growth.”

That’s where LinkedIn comes in. LinkedIn anticipated the crucial importance of social networking. And in the age of social media, they realized that a jobs platform should be much more than a digital repository where you can find available jobs. It should be a platform that enables people within the same profession or occupation to network with one another. Sure, employers, as well as individuals, can advertise jobs, but that is not the only purpose.

LinkedIn essentially had a 360-degree view of what people’s needs were when it came to employment and their professional careers. Whereas Monster.com was only focused on one aspect of that universe of things that people are looking for when they are using a digital platform that has to do with professional careers.

LoGiurato: LEGO, as you mentioned, has been dubbed “the Apple of toys.” Can you discuss how LEGO successfully digitized to turn around its fortunes?

Guillén: LEGO is a very, very famous company. They invented bricks as a toy back in the 1950s. They grew in the 1960s and the 1970s. But in the 1980s people were getting tired. Not only that, video games were taking over. They decided, at that point, to diversify into theme parks and into other similar ventures, and all of that failed. They only began to succeed again in the late 1990s and in the early years of this century after they realized that what they needed to do was to create a community of people who would want to use bricks as a way to entertain themselves, as a way to exercise their skills.

In creating that community, that’s when they were able to become “the Apple of toys.” How did they do that? They used social media. They persuaded people of all ages, not just children, that they needed to play LEGOs pretty much every day. They used digital tools to tell their audience, “Here comes a new LEGO game. Here comes a new thing that you have to try out.” They created so much hype about what happens to be a very traditional toy to the point that as we speak now, LEGO is by far the most successful toy company in the world.

LoGiurato: There are a lot of lessons to take away from the book, but if you had to pick one to leave readers with, what would it be?

Guillén: The main lesson stemming from The Platform Paradox is that no platform in the world can succeed unless it understands the network effects underlying its potential growth. What’s important is first to determine whether the digital platform is one-sided or two-sided, and secondly to ascertain whether the network effects operate at the local, the national, the regional, or the global level. Because depending on that analysis, the strategy for the international growth of a digital platform can be very, very different. Choosing the wrong strategy, if you misunderstand the nature of the network effects, will in the end only lead to failure. 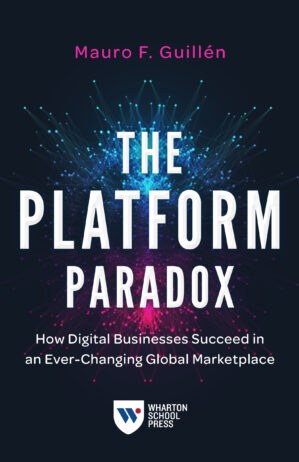 Get The Platform Paradox, by Mauro Guillén.