Wharton's Benjamin Keys discusses his research on the causes of consumer financial distress.

Before the coronavirus pandemic created a record 6.65 million jobless claims in a week and sparked increasing alarm about the direction of the economy, the United States had been experiencing low unemployment and robust consumer spending. Yet many households still reported financial distress. In fact, the U.S. Bureau of Labor Statistics found that before the global pandemic struck, 40% of adults did not have enough money to cover an unexpected $400 expense.

Wharton real estate professor Benjamin Keys has been looking at reasons behind this personal economic struggle, with a particular examination of whether geography or individual characteristics play a role. His most recent paper is titled, “What Determines Consumer Financial Distress: Place and Person-Based Factors,” and it is co-authored with economics professor Neale Mahoney of the University of Chicago Booth School of Business and Hanbin Yang, doctoral candidate at Harvard Business School. Keys spoke with Knowledge at Wharton in early March about their research and what it means for policymakers who are trying to address the widening wealth gap in the U.S. (Listen to the podcast above.)

Knowledge at Wharton: What inspired you and your co-authors to undertake this study? What questions were you trying to answer?

Benjamin Keys: I think we have a really limited understanding of just how widespread consumer financial distress is in the United States, and data limitations largely have driven that lack of understanding. We had the opportunity to examine an unprecedentedly large data set of consumer credit records from one of the major credit bureaus, and that gave us new insights into how widespread these problems really are.

Knowledge at Wharton: That data came from TransUnion, and it was on 35 million individuals spanning 16 years, correct?

Keys: Yes, it’s a massive data set. We were getting anonymized credit records every month for 16 years.

Knowledge at Wharton: What metrics did you use to define “distress?” That could mean different things to different consumers.

“[We] have a really limited understanding of just how widespread consumer financial distress is in the United States, and data limitations largely have driven that lack of understanding.”

Knowledge at Wharton: Home foreclosures and auto repossessions would not fit into that range, correct?

Keys: That’s right. Those were things that we could have looked at in this project, but it became pretty sprawling already with the amount of data that we had. So, we focused in on three specific measures for the paper. One is looking at debt in collections, which is an unpaid bill that goes to the collectors who then reach out to you by mail or phone, or who come to your house and try to collect on that debt. Those are usually unsecured debts, so there isn’t a house or a car that’s backing those debts.

Knowledge at Wharton: You used what you call a “movers” research design in your study. Can you explain what that is and why it’s important in this context?

Keys: We were inspired to use a movers research design because we looked at some of the maps plotting the simple averages of these distress measures across different counties in the United States and different commuting zones. You can think of those as metropolitan areas, and those are all in the paper. I encourage folks to take a look at the maps because they are pretty striking.

Here’s how the movers research design works: Think about someone who moves from the Upper Midwest, say Minnesota, where default rates are low, to the deep South, say Georgia, where default rates are high and distress rates are high. Do we see behaviors change when they move from one place to the other? If we see behaviors change sharply, then we think that it’s being driven by location, whether that’s the state laws, whether that’s local lending practices, or maybe because of social norms in that community. If we don’t see behavior change very much, then we think that these behaviors are sort of sticky on an individual level. It’s something that folks carry with them no matter where they live. That might be financial literacy, that might be trust in banks, that might be wealth. That might also be habits that they’ve formed earlier in life. 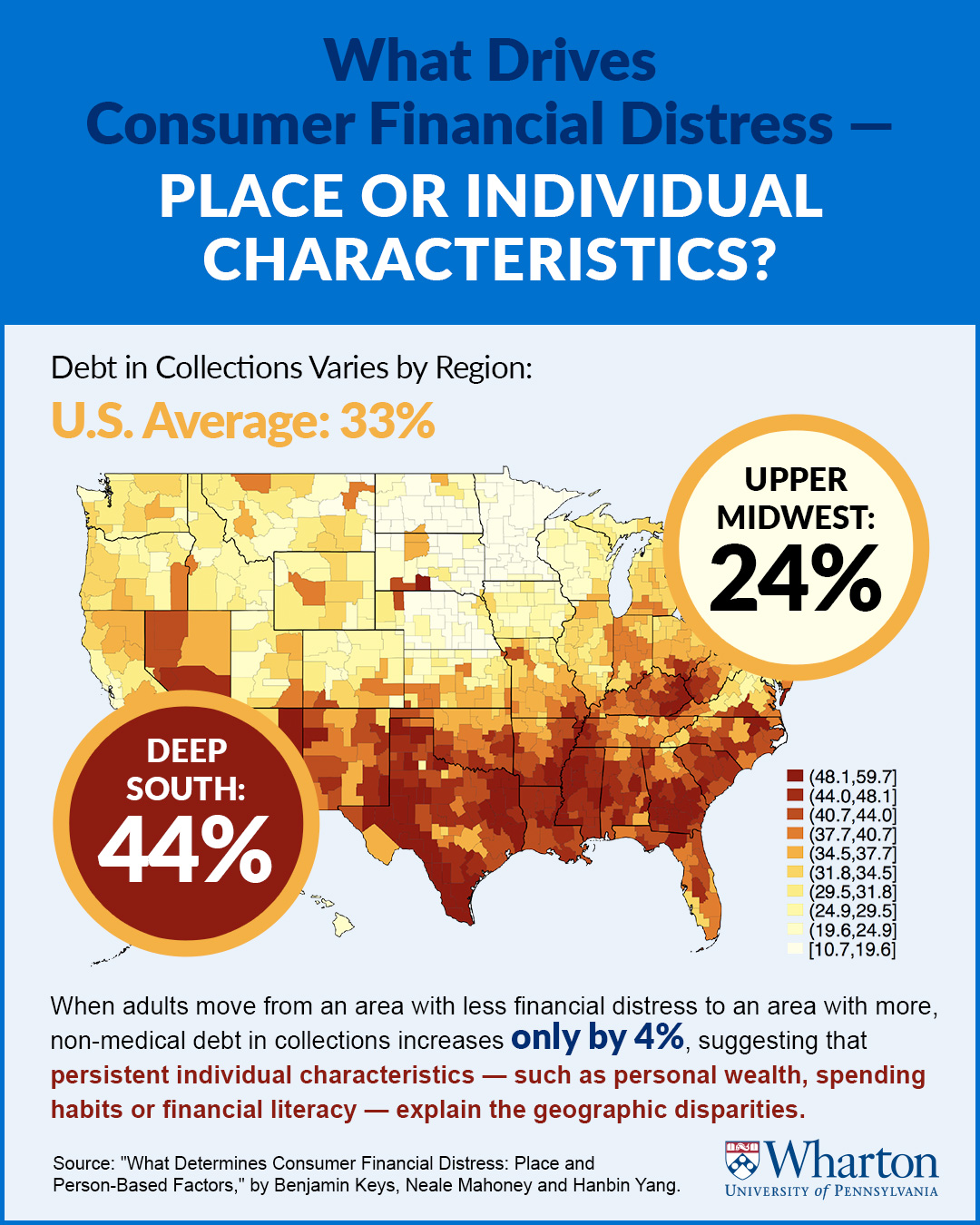 Knowledge at Wharton: What were some of the other geographic disparities that you discovered, and did any of them surprise you?

Keys: The differences in bankruptcy across the country are staggering. It’s not just the level of filing but the decision to file Chapter 7 versus Chapter 13 — those are two different ways in which households can resolve outstanding debts. Chapter 7 allows them to liquidate their outstanding debts for a fresh start. Chapter 13 provides a repayment plan. But the patterns are very different state to state in terms of who uses which type of resolution process, and that doesn’t align perfectly with this sort of Upper Midwest, deep South split. Some states, like Tennessee, have especially high Chapter 13 filing rates, but other states seem to not follow that pattern. We were struck by how strong those differences were across regions in filing for bankruptcy.

Knowledge at Wharton: This gets us into the question of place-based versus person-based factors that fuel these situations. What did you look at for both of those categories, and what did you find?

Keys: The first big takeaway from our movers analysis is that individual characteristics seem to be the main determinants of whether you get into financial distress. Looking at our measures of debt in collections or falling behind on your credit card payments, where you live doesn’t seem to explain much of that. The way that you can tease that apart is that as you watch someone move from, say, Minnesota to Georgia, how much does their behavior converge? The answer is not very much. Those kinds of financial distress proxies don’t seem to budge a whole lot.

Now, they’re not zero, so we can reject zero statistically, which is interesting. It means there is still something about the place that matters. But the place-based factors seem to determine whether you use bankruptcy to get out and specifically which chapter of bankruptcy you use. The measures that we find for bankruptcy are on the order of 25% to a third of the variation can be explained by these place-based factors. In other words, if you move to a place with a high bankruptcy rate, you’re now more likely to file for bankruptcy, and that may be a function of the local legal networks and local lending practices. But we also think that there may be an explanation there that’s related to information.

Knowledge at Wharton: Can you explain that further?

“I think part of the story is simply a lack of an ability to measure the level of wealth inequality in this country.”

Our interpretation of that is that there’s some knowledge that you’ve gained from having lived in Georgia, having seen your peers, maybe family and friends file for bankruptcy, and you bring that with you. That’s a pattern that folks have seen and used as a test of information stories in a lot of other contexts, including things like who files for the earned income tax credit. We thought that pointed to a story that’s related to social norms and the power of local networks in providing some information about how to get out of financial distress.

Knowledge at Wharton: How did economic upheavals like the Great Recession factor into your analysis?

Keys: We expected to see a pretty large cycle in terms of financial distress, especially with the depths of the financial crisis. And what you see is a big shift in the levels, so you see a rise in financial distress. Just to put a fine point on that, about 5% of all consumers with a credit record filed for personal bankruptcy between 2008 and 2015. This was a really traumatic financial event for a lot of households. What we didn’t see is thinking about the geography of this, the patterns in financial distress. We didn’t see big shifts in the geography. That struck us as surprising. We thought, “Well, we’ll expect to see big changes in the sand states, where they had the biggest booms and busts in house prices and foreclosures.” But for our measures of financial distress that we analyzed, they actually looked to be quite persistent across space over time.

Knowledge at Wharton: What are the key takeaways of your research for policymakers and consumers?

Keys: I think there’s clearly a role here for more research to understand exactly why the individual characteristics seem to be so important, and trying to unpack those individual characteristics. I think part of the story is simply a lack of an ability to measure the level of wealth inequality in this country. I think some of our measures of financial distress are a proxy for having very low levels of wealth and maybe, in addition, having low levels of wealth in your personal network. If you’re going to fall behind on a medical bill, and that’s going to reach the collections agency, you probably don’t have the savings to pay it off. Maybe your family and friends don’t have those savings to pay it off, either.

I think this sheds some light on the degree of wealth inequality in the U.S. in ways that are often difficult to measure. And I think that points to a range of questions for policymakers. One is thinking about medical collections practices. One of the things we do find is a larger place-based effect for medical collections relative to non-medical collections. Understanding this broader, on-going debate in the current presidential campaign about Medicare for all and other ways in which we can alleviate some of the burdens related to terrible negative health shocks — I think that’s a natural starting point.

I think another implication of our work for policymakers is that these person-based characteristics may be difficult to modify, and it doesn’t look like local state laws are really crucial in driving these levels of financial distress. We need to focus in on unpacking this somewhat of a black box that we’ve uncovered in terms of the individual characteristics. It’s a difficult thing to unpack, and we feel like we’ve made progress just doing this decomposition between person and place. But [we need a greater] understanding of how much is habit formation that maybe developed in youth and whether this is related to education and the quality of education, and whether this is related to trust in banks. I think there’s much more to be done to point policymakers towards changing individual behaviors and better informing consumers of some of the risks of falling behind on your bills.