Wharton’s Michael Useem talks with Brett LoGiurato from Wharton School Press about the 10th anniversary edition of his book, ‘The Leader’s Checklist.’

In the 10th anniversary edition of The Leader’s Checklist, world-renowned leadership expert and Wharton management professor Michael Useem gives leaders the tools to face any and every challenge.

In his book, Useem offers leaders 16 mission-critical principles to help them develop their ability to make good and timely decisions in unpredictable and stressful environments — at those moments when leadership really matters.

Brett LoGiurato, senior editor of Wharton School Press, sat down with Useem to talk about the new edition of his book, why all leaders must “think like a CEO,” and what we can learn from observing leaders in settings that are not familiar to us.

Brett LoGiurato: Congratulations on the publication of the 10th anniversary edition of your book, The Leader’s Checklist. What are the biggest things that have changed for you over the past 10 years since you first wrote the book?

Michael Useem: After the initial edition, I spent a good bit of time talking with and watching top executives — especially in the private sector, but in the public sector as well — get the job done and move the needle in a way that made sense to them and to the board of directors and investors [if it was a private company].

In one respect, nothing has changed in that what was true 10 years ago is still true today. For example, one of the items on the checklist is “communicating your character.” People literally want to know who you are. What do you stand for? What are your values?

Another principle: “Honor the room.” It’s a politician’s phrase — whenever you meet with people, whether on the web or in a public or physical space, they want to know that you know who they are and how much you appreciate that they are doing their job in collaboration with the leaders of the enterprise. Those two factors, for example, of the original 15 that I put together in the first version of The Leader’s Checklist remain as true now as they were then.

“People literally want to know who you are. What do you stand for? What are your values?”

Having said that, [some] of the factors that I had included in the original 15 have taken on more salience [during the pandemic]. There’s more reason to focus on them or to be paying attention to them. I think there’s a greater stress on thinking and acting strategically, which is one of them. It connects with another book that I co-wrote with Harbir Singh called The Strategic Leader’s Roadmap.

Second: “Decide decisively.” Clocks are moving faster, problems are emerging more quickly. Customers are more ready to change, especially in the era when the cost of switching is quite low… You’ve really got to decide decisively and then get on with it. I’ve become ever more convinced that that’s one of the most vital elements on any leader’s checklist.

LoGiurato: The original Leader’s Checklist featured 15 principles. This new one features a 16th principle. Can you explain why you added it here and how it complements the other parts of the checklist?

Useem: The 16th principle in this new edition reads very simply: “Think like a CEO.”

I’ve added that because I think it’s maybe the best single way to get on top of the other 15 elements for a chief executive, a country prime minister or president, a governor or a community leader, the top person at a hospital, or whatever enterprise you may be involved in. Leadership requires an enormous diversity of thought and actions.

The phrase “think like a CEO” is a device to ensure that as you take an action or make a decision or hire somebody, you’re taking into account all of the 15 other vital items of The Leader’s Checklist. We need the whole thing. We need to be a complete leader, and thinking like a CEO helps us do exactly that.

LoGiurato: You provide these principles, but leaders obviously have to be able to do something with them. Can you talk about how anyone can customize the checklist, test it, and put it into action?

Useem: It’s an important point, in the sense that if you’re a pilot of a commercial aircraft, the company and then the regulatory authority — the FAA in the case of the U.S. — is going to insist that before you take off, you’re going to look at the fuel, the flight plan, the weight, the anti-collision radar. You have no choice but to follow a checklist, a pre-flight checklist that’s given to you.

“We need to be a complete leader, and thinking like a CEO helps us do exactly that.”

Same thing for surgeons. As surgeons go into their medical center operating room, they typically have to go through a 19- or 20-item, what they will call a “timeout.” Do we have the right patient? It’s going to be the left knee and not the right knee that we’re going to replace today. They have to go through all of those items for very good reason and that is, we’re going to be in trouble if we get everything else right but forget to check the fuel in the case of a pilot or we forget to check the name of the patient in the case of the operating room.

With all that said, what is vital is that we enact the principles, take them to heart. If we’re now talking about leadership, we are not given what we should be taking to heart. We have to invent, we have to build out of our own experience what is most critical, and thus, what makes a leadership checklist very different from a pilot’s checklist or a surgeon’s checklist is that we need to create it ourselves.

I strongly advocate taking a look at other checklists — we have some examples in the book — and using those as a foundation for developing your own. Make certain it’s your own, and it addresses the concerns and cultures of the setting you’re in. Then, test it out. See what will happen if you fail to follow one of the principles. In the case of some of the principles that don’t apply to where you are, as you watch what happens, the answer may be nothing, so you don’t need that principle. Thus, customize it, test it, refine it, improve it, build it out, and then put it into action.

LoGiurato: One of the most recognizable examples in the book comes from CVS and Larry Merlo, its former CEO. Can you explain what CVS did with tobacco and cigarettes and how it fits into the broader principles of The Leader’s Checklist?

Useem: CVS is a very good example. Under the leadership of its CEO, Larry Merlo, with some 10,000 stores throughout the U.S. that included pharmacies at the time, tobacco products — often up near the cash register — began to present a dilemma. In his view, thinking strategically, the future of his store system was going to increasingly depend on providing solutions to the health problems that his customers were having. Walking into a store with tobacco products right there at the front almost contradicted or undermined the strategy of helping people become healthier.

With a lot of thought, a lot of analysis, a lot of back and forth, a lot of discussion with his top people in the front lines and his board of directors, he decided, with board approval, to remove all tobacco products from CVS. A very expensive decision in the short run — the stock took a big hit, the revenue at the stores went down considerably as some people didn’t come into the store at all.

The consequence was quite dramatic for public health in that in the regions near CVS, tobacco consumption significantly declined. By implication, from all the research we know about tobacco in public health, public health improved because of that.

Over time, as Larry Merlo worked to ensure that his strategy was consistent with the [company’s] vision — to provide better health services and health products to customers — the strategy of selling pharmaceutical products but also tobacco in the same store didn’t seem to fit well together. In a leader-like fashion, [illustrating] some of the very specific principles that I single out in my own leader’s checklist … he took the system of stores in a different direction. In my view, he exercised leadership at its best … and today CVS stands better for it.

LoGiurato: There are a lot of non-business-type examples in the book. How can the leader’s checklist apply to even non-business situations where you need good leadership?

Sometimes by looking far away from home, we can get a better fix on the leadership we need at home. I strongly encourage listeners, viewers, to take a look at an institution you’ve had no direct involvement in. If you haven’t served in the armed forces, take a look at what is taught, for example, at the U.S. Military Academy at West Point, which we have done [in the book]. If you’re in the military, take a look at what General Electric, Google, or American Express is doing to better appreciate what you might want to do back in your own setting.

The book is addressed to anybody who wants to make a difference. Whether it’s in a startup, a private company, a nonprofit serving a community, a hospital, a health center or a health practice, a company, and even a community and a country.

I’ll double down on that and say nobody’s got the perfect solution or the perfect definition of what goes into leadership. But by looking abroad and looking outside our own enterprise at others, including those not in your own sector, I think we can learn enormously what’s vital in our own setting. 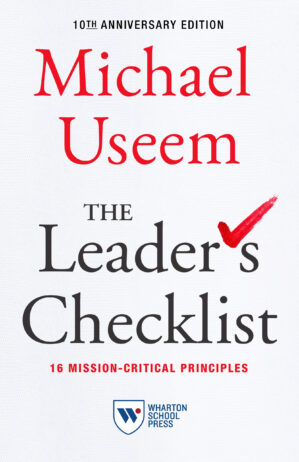 Get The Leader's Checklist, by Michael Useem.