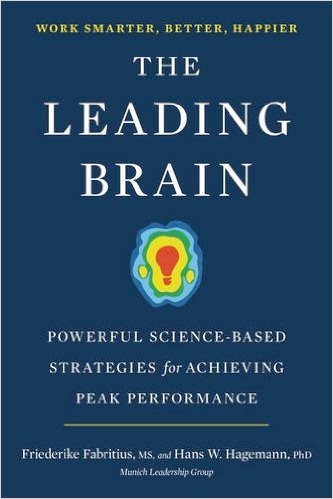 Advances in cognitive neuroscience are enabling insights into the brain like never before. Neuroscientist Friederike Fabritius and Hans Hagemann, co-founder of the Munich Leadership Group, combine science with management consulting to discover which techniques for peak performance actually work, in their book The Leading Brain: Powerful Science-Based Strategies for Achieving Peak Performance. Hagemann recently joined the Knowledge at Wharton show, which airs on SiriusXM channel 111, to discuss science-based strategies for peak performance.

Regulating your negative emotions is critical to peak performance. When you try to inhibit negative emotions that you feel — anger, frustration, disappointment — in the workplace, the rational and emotional systems in you compete with each other. When your brain is busy trying to tamp down negative feelings, you become too distracted to perform well. “Two systems in your brain are competing,” Hagemann said. “That leads to not being focused on anything anymore.” To regain cognitive control, recognize and ‘label’ how you feel, he said.

Peak performance is not about entering a stress state. “Peak performance means that you find the environment that gets you in a position, and in a situation, where you can really perform at your best,” Hagemann said. “We don’t have the idea of a stressed out top performer.” Instead, the peak performer is someone whose emotions are under control and as such they can think optimally. “We are talking about an easygoing situation where you feel that everything is easy for you to do,” he said. “The best possible situation in this context is experiencing flow, where everything seems to go very smoothly and you are very creative and everything is coming to your mind easily.”

Gender and age matter. Hagemann refers to a “performance profile” as the amount of intellectual arousal needed to help an individual achieve peak performance. That amount will make a difference between men and women, old and young. On an axis ranging from deep sleep to a panic attack, some people are “sensation seekers,” Hagemann said, and need a lot of arousal to hit their peak. That means they are often running on testosterone — he called it “a very male thing” — while others can hit their peak with fewer stresses placed on them.

“There is one thing that determines the highest performance, and that is psychological safety.”

Lean towards rewards, not threats. Every company has a “reward” circle and a “threat” circle. In a “threat” state, “you get a rush of cortisol in your bloodstream. That makes your muscles stronger, but it can cut off your cognitive thinking if it is strong enough,” Hagemann said. In “reward” circles, people feel good and perform better. “Creating a climate of appreciation in companies is the best thing you can do,” he said. “This is very strongly supported by the research that Google did recently.”