Key signs point to a pickup in private equity (PE) activity in 2014 and optimism is running strong, according to a survey of 100 PE firms and 1,600 corporations by EY and the Economist Intelligence Unit. Some reasons for the optimism: The world economy is forecast to grow faster — by about a half of a percentage point over 2013, many economic forecasters say; there is plenty of cash available for deals; and the number of mergers and acquisitions – which often stoke PE activity — is expected to rise. What’s more, investor interest in BRICS countries and emerging markets also is increasing. To learn more, Knowledge at Wharton interviewed Michael Rogers, EY’s global deputy sector leader for private equity, and Stephen M. Sammut, a senior fellow and lecturer at Wharton, for this podcast. 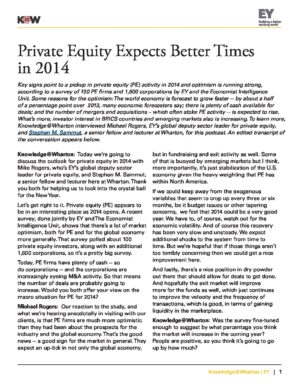