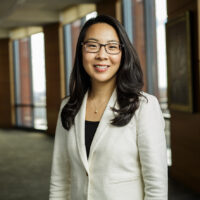 Wharton’s Hummy Song and Aaron Smith-McLallen from Independence Blue Cross discuss their research on disruptions in preventative care during the pandemic.

During the early days of the coronavirus pandemic, hospitals and health care facilities across the country stopped nonessential and elective procedures to mitigate the spread of the disease. While that may have been the right call to help flatten the curve, the decision also delayed millions of women from getting routine mammograms to detect breast cancer. Scientists from across Penn worked together on a study with Independence Blue Cross, using the company’s insurance data to quantify the effect of the pandemic on both screening and diagnostic mammograms. The study, titled “Disruptions in Preventive Care: Mammograms During the COVID-19 Pandemic,” was recently published in the journal Health Services Research. Hummy Song, a Wharton professor of operations, information and decisions, and Aaron Smith-McLallen, director of data science and health care analytics for Independence Blue Cross, are two of the co-authors. They joined Knowledge at Wharton to share the results of the study.

Listen to the podcast at the top of this page, or read an edited transcript of the conversation below.

Knowledge at Wharton: Professor Song, can you tell us what the key findings of your study are?

Hummy Song: First of all, we found that in the 20 weeks from mid-March 2020, where it all kind of came crashing down, to the end of July, the volume of routine screening mammograms fell by 58%. If you hone into just the first four weeks of that period, we see a 99% drop, so it completely plummeted.

You might think with routine screening mammograms that it’s fine to just skip a year or delay them, since it’s just preventive. But we also looked at what happened to diagnostic mammograms — these are the kinds that are performed when breast cancer is actually suspected. We found really steep declines in the volume of those, as well. In the first four weeks, those dropped by 74%, and then over the course of the entire 20 weeks of our study, they dropped by 38%.

Knowledge at Wharton: That is astounding. But your data showed that the number of screenings rebounded in the summer months, after those first initial months of COVID. Doesn’t that indicate there is no longer a problem?

Song: I would say there is both good news and bad news. The good news is yes, the volumes started to rebound by the middle of May in terms of diagnostic mammograms. By the end of our study period, which was in July, the diagnostic mammograms recovered to levels that were similar to previous years. But for screening mammograms — those routine ones — by the end of July, they were still about 14% below what we would expect them to be.

“In the worst-case scenario, we find that this backlog is just going to keep growing.” –Hummy Song

Even though volumes have largely recovered for many of these, especially for those diagnostic mammograms that are really important, the not-so-great news is that there were a lot of mammograms that went unperformed during that interim time. That’s what we’ll call missed mammograms. In the paper, we did some calculations to project how long it might take to clear this entire queue of missed mammograms that accumulated over those months. In the best-case scenario, it will take a minimum of 22 weeks, and that’s accounting for all the things you need to think about in terms of reducing capacity so that we can have more space in the waiting room, and have longer schedules so that we can accommodate patients maybe into evenings or weekends, just to get those numbers back up.

In the worst-case scenario, we find that this backlog is just going to keep growing. That’s going to mean that women won’t be able to catch up on those mammograms that they missed.

Knowledge at Wharton: Dr. Smith-McLallen, can you tell us about the data that you used in this study? Your company, Independence Blue Cross, was instrumental in this research, correct?

Smith-McLallen:  That’s right. Independence Blue Cross and Penn, particularly Wharton, have a really robust research collaboration across many fronts. In this case, we used de-identified medical claims from 2018 through July 2020. We identified diagnostic and screening mammograms that Hummy just described, using HCPCS (Healthcare Common Procedure Coding System) codes on those claims. The data represent both our commercially insured and our Medicare members — women over 40 who are eligible. That’s the age when mammograms start being recommended. The data are primarily from women who live in the Philadelphia five-county area, which is our primary service area, and represent historically 240,000 screening mammograms and about 66,000 diagnostic mammograms included in the study.

We can see what happened in the early years, then compare that to what happened more recently, which makes it more convincing to attribute the declines in the mammograms to the onset of COVID, because we can see the previous trends in earlier years.

Smith-McLallen: Absolutely. That’s getting at the heart of this. These are not just interesting graphs and statistics, but these are real women out there who weren’t able to get the screenings and the care that they needed at that particular time. We may have real implications that we’re trying to get our arms around.

Knowledge at Wharton: What are the gaps in the data?

Smith-McLallen: Our data represent generally about 50% of the commercially insured population in the Philadelphia five-county region. Independence has a strong footprint in this area, but we don’t have data for a substantial number of women who are eligible for screening. So, if they are uninsured or insured through a different commercial plan or through a traditional Medicare or Medicaid plan, those obviously aren’t represented in our data. We have a little bit of a blind spot there. Our data do tell the story for a considerable portion of women in our communities, but certainly not all. There are people that we missed.

“These are real women out there who weren’t able to get the screenings and the care that they needed.” –Aaron Smith-McLallen

Interestingly, though, we know that compliance is generally higher for commercially insured women. The results that we have may not be representative of everybody in our population, but I think the declines that we see are among those who may have been the most likely to get the screening. In other populations, the story could even be a little worse, unfortunately.

Knowledge at Wharton: In your brief, you wrote that health care systems have to figure out a way to optimize care for all patients during the pandemic because preventive screening such as mammograms will catch problems early on. We’re in the second year of the pandemic now, and there are variant strains of the virus. What are the concerns for researchers?

Song: One thing to note [regarding] that best-case scenario I told you about earlier [is that] we’re already well beyond the point where we can even dream about achieving that. As we both mentioned, the study concluded with data collected through the end of July. You can imagine there are additional cases of missed mammograms that have accumulated since then. The pandemic is ongoing, and case counts are still incredibly high. There are going to be additional mammograms going unperformed that you can think of as essentially adding to that queue of missed mammograms.

But I want to say something positive here, too, which is that the environment we’re in now in terms of health care delivery systems is really different compared to what we saw in March and April of 2020. Many of these health systems, rather than shutting down completely for all types of elective care and non-urgent care, are now staying open. As a patient with a non-urgent or elective need, you are able to go in and get seen for those care concerns that you might have. That does mean that more people are going in. They are getting their diagnostic mammograms done, oftentimes even their screening mammograms done, whether those were rescheduled from last year or they are just now due for their next one.

“Go get your breast cancer screening. Don’t skip out on other preventive care.” –Hummy Song

Smith-McLallen: We have concerns that people are going to forgo care that they need that can identify disease. Not just mammograms and breast cancers that we’re talking about here, but there are other cancer screenings and chronic disease screenings that people may not receive. Early disease detection is critical to help delay onset and manage disease and even cure. So, we are really concerned about disease progression and the increased morbidity that results from delaying or forgoing care. Perhaps it’s out of fear of going to the doctor or the hospital, or [difficulty] getting appointments as providers try to manage patient flows. And certainly, it’s out of safety concerns for going to the hospital or the site of care.

Knowledge at Wharton: What would you say to women who might still be hesitant to schedule their mammograms out of fear of contracting COVID?

Smith-McLallen:  In our study, we estimate that between March and July of 2020, there were roughly 39,000 missed screening mammograms. Statistically, that translates into between 200 and 320 women who experienced a delay in breast cancer diagnosis. So, I think it’s really important that they continue to go and get screened. We’ve come a long way in treating breast cancer, and early detection is key to having a positive outcome. Although the percentages may seem low, it impacts a substantial number of women, and getting that early detection is extremely important.

Song: Go get your breast cancer screening. Don’t skip out on other preventive care that you should be going to your provider and getting seen for, as well. Providers are really paying attention to the kinds of safety measures they are implementing — not only for their patients, but also for themselves. We need our providers to stay healthy, too.

If you’re concerned, call your provider’s office. Ask them to walk you through what your visit is going to look like, and what kind of safety protocols they have implemented. Hopefully, that will make you feel more comfortable going in for your routine care.