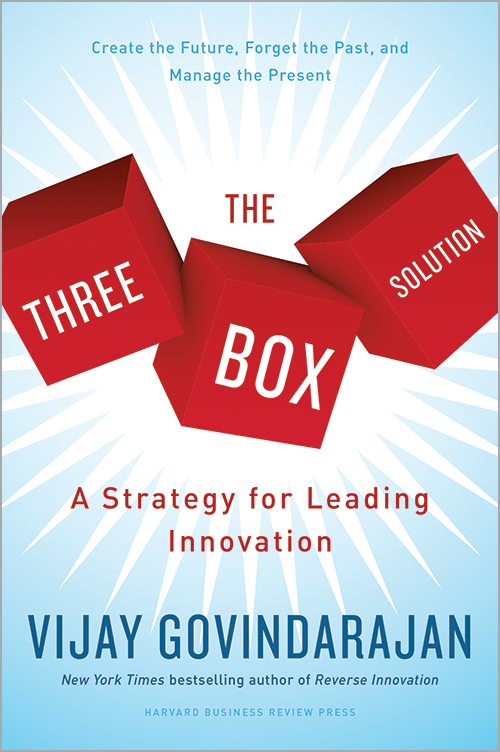 In a new book, The Three-Box Solution: A Strategy for Leading Innovation, Vijay Govindarajan, bestselling author and professor at Dartmouth’s Tuck School of Business, offers a roadmap for leaders who want to make their organizations more innovative. Govindarajan broke down the three boxes on the Knowledge at Wharton show on Wharton Business Radio on SiriusXM channel 111. (Listen to the podcast at the top of this page.)

Knowledge at Wharton: The Three-Box Solution was inspired by your native India?

Vijay Govindarajan: That’s right. In Hindu spirituality, we recognize three gods. Lord Vishnu, the God of Preservation, is box one: manage [the present]. Lord Shiva, the God of Destruction, is box two: destroy the past. And then there is Lord Brahma, the God of Creation; that is box three: create the future. Therefore, the three-box solution is really tied to Hindu Scriptures….

Box one is manage the present. That means you’ve got to improve the efficiency of your current businesses, the way they are constructed today. Box two is about … the past. You have to abandon some of the mindsets and practices from the past. Box three is about creating the future….

Knowledge at Wharton: I was very interested in the second box: escape the traps of the past. Do you mean having an eye for future problems and cutting them out before they become a problem?

We haven’t written a single book on forgetting organizations. If you can’t forget, you can’t learn. The reason why forgetting is a problem is it is in the mindsets, and that mindset is formed on your success in box one….

Govindarajan: In fact, selling off businesses is one way you can do box two. For instance, General Electric [sold] their finance business. Or Procter & Gamble [sold] many, many of their businesses in the beauty and personal care segment. That’s one way you can do box two. That doesn’t mean these are bad businesses, but they don’t fit with your future. It may fit with someone else’s future.

The other way you can do box two is change people’s mindset…. Box one success creates mindsets and principles, some of which you have to selectively forget, but that’s where the biggest challenge is. Erasing organizational memory is the toughest challenge.

Knowledge at Wharton: You alluded to the fact that it is hard for a lot of companies to look to the future when the level of success they are having in the present is so good. You’re so worried about keeping that level of success going that you don’t think about the next five to 10 years, right?

Govindarajan: That is absolutely right because it looks like the year 2020 is too abstract…. But the fact is the future is now. Because if you only focus on today every day … one day you are going to wake up and the year 2020 will be today.

Otherwise, they are not going to survive for 136 years…. But Jeffrey Immelt, if you just take a look at his tenure, he essentially pared back in box two. He has done many things in terms of diversifying businesses, starting all the way from insurance, NBC Universal, more recently, finance businesses. In box three, he has invested aggressively in emerging markets. Emerging markets have phenomenally grown under his watch, and he has created many affordable products in healthcare and the energy sector there. More recently, the Internet of Things is a great example of really re-imagining General Electric because GE, as you know, is very much a hardware company. They make medical imaging equipment, like X-ray machines and CAT-scanners. In energy, they make large gasoline turbines. In aircraft, they make aircraft engines. These are all hardware products, where they are fantastic.

What Jeffrey Immelt wanted to do was create a software powerhouse. Because they are so successful in box one, what he did was he created a dedicated team in Silicon Valley and recruited about 1,000-plus software engineers who have created this Internet of Things. That dedicated team, therefore, has some separation from the box-one performance engine. That’s why it can forget. Forgetting is a challenge for box one. But creating a dedicated team is a way you let them invent their own rules, without getting bogged down by the rules in box one. However, the dedicated team is connected to the mothership — it’s my point.

Because GE can invent an Internet of Things, because they have software that is benefitting from the hardware. The aircraft engines generate so much data that the Internet of Things can leverage. Similarly, gasoline turbine engines or the X-ray machines and CAT-scanners. That is why a pure Silicon Valley startup cannot beat GE. I am a big fan of big companies.

Knowledge at Wharton: You mention the publishing industry has failed in trying to play out the three-box solution, for the most part. Where does the majority of the publishing differ from what The New York Times has been able to do?

Govindarajan: The publishing industry’s struggle is a classic example of why the three-box solution is so hard. The publishing industry had an analog model. In the analog model, which is the printed medium, the margins are very high and the model is [subscription or advertising]. When it moves to digital, suddenly from analog dollars you are making digital pennies, and you don’t even know how to monetize it, and digital has the potential to cannibalize the analog model. That is why it is very important to create a dedicated team in the analog business. Otherwise, it would crush the digital business. The New York Times did a great job.

“Dropbox came up with a brilliant box-three move … you have a magic folder in which you can store data….  What happens is Apple comes with iCloud, Amazon comes up with Cloud-based storage; the empire does strike back.”

Knowledge at Wharton: Outside of the publishing industry, are there other examples of corporations that just haven’t been able to figure it out to this point?

Govindarajan: In fact, I would say most companies cannot figure it out. The reason they find it hard to figure it out is the more successful you are in box one, you can go into a preservation mode. It is just natural. The other reason is if you don’t invest in box three today, it does not hurt you today. It hurts you in the year 2020. Therefore, you kind of slip.

Knowledge at Wharton: We’re talking about some bigger-name companies here, but is it something that fits also with medium- and small-sized companies, as well?

Govindarajan: Absolutely. Even a Silicon Valley startup has to practice three-box solution. This is the interesting thing. I have given this presentation in Silicon Valley. People assume it doesn’t apply to startups. Of course, when you are just a pure startup, there is no box one, there is no box two; you only have box three. But what happens in Silicon Valley is very quickly, your box three becomes box one. Therefore, you get into the three-box solution problem. By the way, that is the reason why many of the unicorn valuations are declining in the last 12 months. Take, for instance, Dropbox. Dropbox came up with a brilliant box-three move, which is, on your desktop, you have a magic folder in which you can store data.

They were first unicorns. What happens is Apple comes with iCloud, Amazon comes up with Cloud-based storage; the empire does strike back. When an empire strikes back, the box three of Dropbox became box one. They didn’t come up with the next box three. That is why their valuations are declining.

Knowledge at Wharton: Is it even a little bit easier now for companies to find these new ways to innovate because of the digital nature of our lifestyles, in general?

Govindarajan: You are absolutely right in this sense. If a company does something smart, because of digital technologies, it will become transparent to the rest of the world. Therefore, it is very easy for someone else to imitate what you do. That is why you have to do the next box three. Otherwise, somebody else will copy what you are doing. In fact, the three-box solution has become even more important because the rate of change and the rate of imitation are very high these days.