Joshua Goldstein of American University and Staffan Qvist, an energy engineer and consultant to clean energy projects, discuss how some countries are slashing carbon emissions with nuclear power. 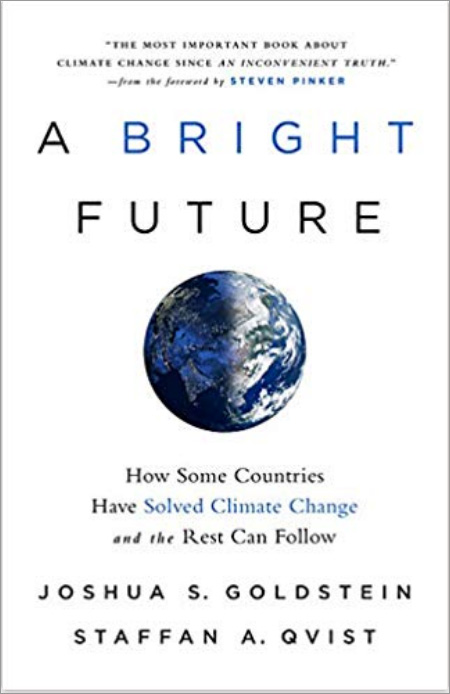 Joshua Goldstein and Staffan Qvist have a plan to save the world – from climate change disaster. In their new book, A Bright Future: How Some Countries Have Solved Climate Change and the Rest Can Follow, the authors advocate for the use nuclear energy to supplant the consumption of fossil fuels and ease the carbon emissions that are choking the planet. They contend that a combination of nuclear and renewables is the best path to slowing climate change. Goldstein is a professor emeritus of international relations at American University, and Qvist is an energy engineer and consultant to clean energy projects around the world. They recently visited the Knowledge at Wharton radio show on SiriusXM to talk about their book. (Listen to the podcast at the top of this page.) The following are key takeaways from the interview.

What inspired this book?

Goldstein said he was drawn to the issue of climate change by his children, who convinced him that it deserved his attention. He has a deep desire to “leave a livable world” for his children, but he grew up against the backdrop of nuclear power in the 1960s and 1970s and wasn’t sure that was the solution.

However, the more Goldstein explored the idea, the more he opened his mind to the possibilities of nuclear energy. “Although I had always been against nuclear power, I learned that you just about can’t do it without nuclear power,” he said. “Then I started to study nuclear power and how Sweden had done just that. It led to the book, and I found Staffan to coordinate with.”

Qvist, who is from Sweden, is familiar with the benefits of nuclear energy. His native country has a de-carbonized energy grid that relies on nuclear energy, hydropower and bioenergy. That approach has kept energy prices low and stable for consumers.

“Sweden doesn’t have any fossil fuel resources, so from an energy security supply standpoint, Sweden chose to go down the nuclear path, and it has served us very well,” Qvist said. “What we’re trying to figure out now with this book and our work is, could other countries follow this model?”

“The reason we’re focused on nuclear power in particular is that it scales up much faster than anything else.”  –Joshua Goldstein

Why are nuclear energy and renewables the answer to slowing climate change?

Quite simply, the world is running out of time. Changes need to be made and fast, the authors said, and they need to be large in scale.

“We need so much clean energy by the mid-century that we feel we should use everything we can, and that means build out as many renewables as we can, use as much hydroelectric power as we can — anything that will work,” Goldstein said. “But at the core, the reason we’re focused on nuclear power in particular is that it scales up much faster than anything else.”

He noted that Sweden and France used nuclear power to put energy on their respective grids five times faster than Germany, which has been working to incorporate renewables. “That means what we might be able to do worldwide in 30 years using the Swedish/French model could take us up to 150 years with the German model, and we just don’t have that kind of time.”

Why is the United States reluctant to rely on nuclear energy?

Fear is one reason why Americans don’t like nuclear energy, and cost is another.

In 1979, radiation leaked from a partially melted nuclear reactor at Three Mile Island in Pennsylvania. In 1986, more than 30 people died after exposure to radiation from the Chernobyl nuclear disaster in Ukraine. And in 2011, a tsunami touched off the second-worst nuclear accident in history, causing three reactors to overheat at the Fukushima Daiichi plant in Japan. Those events loom large in the minds of Americans.

But in 60 years of nuclear power, it’s been proven to be 400 times safer than coal in terms of injuries or deaths, Goldstein said.

“There’s a lot of misunderstanding,” he said. “Similarly, nuclear waste is quite misunderstood. People don’t realize how miniscule the quantities are. It’s so much more concentrated than fossil fuels or anything else, that you could live your entire life with an American-style electricity use — all from nuclear power — and generate waste that would fit in a soda can.”

That waste is currently stored in casks that are certified safe for 100 years, he said. Perhaps by then, scientists will have found methods to re-use the waste. “That’s the 100 years when we need to be solving climate change,” Goldstein said. “So, nothing’s perfect, but nuclear has been struggling because people don’t treat it normally the way you would anything else, with costs and benefits.”

“I think if you pollute and you kill people from your business activities, you should bear the cost of that.” –Staffan Qvist

Nuclear is also expensive to develop, costing billions upfront that is returned over 60 to 80 years. That’s a tough proposition for investors, especially amid changing regulations.

Is there a cost-efficient model for building nuclear power plants?

Nuclear reactors would become cheaper if manufacturing was both centralized and standardized, the authors said. Like a Boeing jetliner, the reactor would come off an assembly line then be shipped to its location, instead of being built on site. “If we can make that project work, Staffan and I think that more than 100 nuclear reactors worldwide per year could come onto the grid, and it would make a big difference in reducing carbon emissions,” Goldstein said.

Some companies are already working on such designs, Qvist said. He mentioned Oregon-based NuScale Power, which designs and markets small, modular reactors. “I should emphasize that even if we just built like we used to — like the United States built reactors in the ’80s — just applying that rate today would decarbonize the U.S. electricity system by mid-century if we normalize for the size of the economy. We are basically extending a positive case here. This is imminently doable, and we have historical data to back up that we could do this if we just put our focus on it.”

Both the U.S. House of Representatives and the Senate have proposed legislation that would require carbon pricing, which is a tax on companies that produce carbon emissions. Ostensibly, carbon pricing would incentivize companies to reduce emissions and innovate to find solutions to climate change. But will it really work? The authors are in favor of the proposal. Not only will carbon pricing help reduce the amount of particulate from coal, but any increase in the cost of using coal makes nuclear a more competitive option.

He noted that carbon emissions in the U.S. increased last year, according to some reports. “We’re moving in the wrong direction. We need to be dropping them fast.”

For Qvist, carbon pricing is a moral imperative. “I think if you pollute and you kill people from your business activities, you should bear the cost of that. So, I’m all for a carbon tax and a fee that includes the external costs,” he said. “That’s part of the success story in my home country. We have a very high price for emitting carbon in Sweden.”