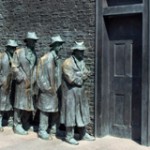 The downward march of the 17-member-country eurozone economy continues with record unemployment figures – a grim reminder that austerity measures have yet to bottom out. Where that bottom is remains elusive, but pessimistic analysts suggest the region could face another five years of sluggish growth – or worse – if current policies continue.

Unemployment was at 12% in the eurozone in February, with 33,000 more people out of work than a month earlier (the rate was 10.9% in February 2012). Eurozone officials expect the rate to rise to 12.2% before the year is out. Recently released manufacturing figures were down across the board in the region too, suggesting that the general downturn could become worse in the second quarter.

What’s more, Spain just announced that growth this year will be even slower than recently predicted. Government officials there now acknowledge that the economy is likely to decline by 1%, vs. the 0.5% forecast earlier this year, putting them in line with Spain’s central bank forecasts. Unemployment is Spain is now at 26.3%, with youth unemployment at nearly 56% (and over 60% in many parts of the country). In France, the unemployment rate – at 10.8% — is the highest since the monetary union was set up.

In the Netherlands, the head of the Dutch Central Planning Bureau (CPB) — the nation’s official economic forecasting agency — is the latest critic to suggest that austerity (cuts in government spending) does more harm than good in so-called balance sheet recessions. Such recessions occur when there is a major collapse in asset prices, such as real estate, which leads consumers and businesses to pay down debt, thus drastically shrinking spending — and the economy. This is what Europe has been undergoing since the financial crisis hit. Critics of austerity contend that cutting government spending at such a time is counterproductive and is causing the mix of recession and Depression underway.

Coen Teulings, CPB head, told the Financial Times that “the Dutch government’s inability to acknowledge the damage done by austerity despite mounting evidence is a case of ‘cognitive dissonance,’” given “a consensus among macroeconomists that cutting deficits does much more economic damage than usual during so-called ‘balance-sheet recessions.’” Even the International Monetary Fund – in the past a relentless supporter of austerity policies as a way of righting sinking economies — has acknowledged recently that such policies can damage an economy far more than was previously understood.

So, in the wake of the banking troubles in Cyprus and the political stalemate in Italy, which for weeks has been unable to form a government because of differences over austerity policies, what does the immediate future for Europe look like?