Writer/Director M. Night Shyamalan on the Catch 22 of Branding and the Power of Point of View - Knowledge@Wharton

Writer/Director M. Night Shyamalan on the Catch 22 of Branding and the Power of Point of View 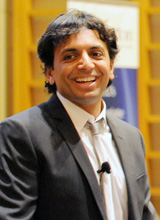 After writer and director M. Night Shyamalan decided to focus the domestic side of his philanthropic foundation on improving public schools in Philadelphia, he spent some time in the classroom teaching English in one of the city’s toughest neighborhoods. Most of the students in the class were “bored out of their skulls” until Shyamalan shared the following statistic: “Word for word, I’m the highest paid writer in the world.”

The students began to sit straighter in their seats. They wanted to know: How did he do it? Was it luck? How about a strong work ethic? Both might play some part, Shyamalan acknowledged, but he believes that the quality that set him most apart was point of view. The advice he shared that day was similar to what he tells his two daughters. “The only thing we have to offer is our point of view. In life, whether you make a chair or work as a housekeeper or a filmmaker, your point of view is what you offer to the world.” [For more on Shyamalan’s views on his creative process and the filmmaking industry, see the companion Knowledge@Wharton interview, “M. Night Shyamalan: Seeing Signs.”]

Ultimately, Shyamalan told the students,”I’m open to being me and whether you like it or you don’t like it, you’re going to know me and my voice.” At a recent Wharton Leadership Lecture, Shyamalan discussed how a strong point of view has helped him achieve success as a writer and director as well as ride out critical and box office disappointments. It has also defined how he runs the M. Night Shyamalan Foundation, which supports social justice programs in the Philadelphia region and internationally.

Each of Shyamalan’s movies has been informed by the life experiences he was having at the time. His breakout hit, the Academy Award nominated psychological thriller The Sixth Sense, was about the “struggle between work and home…. Malcolm [Crowe, the child psychologist at the center of the film, played by Bruce Willis] is struggling with work, and his relationship with his wife is suffering.” Follow-up Unbreakable, which starred Willis as a security guard who discovers that he is a superhero, was about feeling “a sense of the weight of the world on me and that I didn’t want that responsibility.”

Born in Mahe, Pondicherry, India, Shyamalan grew up in the suburbs of Philadelphia. He made his first film while still a student at the Tisch School of the Arts at New York University. Titled Praying with Anger, the movie stars Shyamalan as an Indian American who was raised in the U.S., but returns to India as part of an exchange program. Though Praying with Anger was screened at film festivals, it never received wide release. Shyamalan’s second movie, Wide Awake, about a young boy growing up on Philadelphia’s Main Line, had its release delayed by three years and gained little traction with audiences.

Although Praying with Anger is the only instance where Shyamalan explicitly addressed his Indian heritage in one of his movies, the director said that background plays a part in the point of view portrayed in his films. “I don’t necessarily talk about eating biryani at home in my movies, but I do talk about a type of spirituality … that I think is compatible with our community in India and how we think about spirituality, and all the questions we ask and what interests us.”

Shyamalan became internationally known with his third film, The Sixth Sense, which tells the story of psychologist Crowe and his efforts to help a young boy, played by Haley Joel Osment, who can see and communicate with ghosts. Released in 1999, the movie grossed $672 million worldwide, was lauded by critics and earned Shyamalan Oscar nominations for directing and writing the screenplay.

The reception of some of his subsequent movies, including Signs, The Village, Lady in the Water and The Last Airbender, has been mixed, and Shyamalan has at times been critically lambasted by critics. “My intention was to have an author relationship with the audience…. But the flipside of that is a brand is created,” he noted. “So for example, if I made a drink and it was Coca-Cola and everybody loved it, but then I decided to make tea, no matter how many times I say, ‘I’m making tea,’ you think you’re drinking a Coke and that it’s the worst soda you’ve ever had.”

Whatever a brand is initially is how customers expect it to remain, Shyamalan said. “The relationship I began with my audience was on a scary thriller with a twist ending. But that doesn’t mean that’s all I make. That same year, I wrote [the screenplay to] Stuart Little. The next year, I wrote a comic book movie [Unbreakable].” But with the negatives come the positive of a built-in worldwide following for his films. “That’s been the Catch-22. It’s something I’m constantly dealing with and thinking about. I wish I could just close the door and write a movie and be as innocent as [thinking,] ‘What story do I want to tell?’ But it’s not as simple as that anymore.”

He acknowledged, however, that making a movie isn’t that simple for most filmmakers, who face intense pressure from studios to choose projects that will be financially successful. “I remember discovering that Walmart had such an incredible pull on everything,” Shyamalan said. “Studios get advice from Walmart. They say, ‘What would your [customers] think about a movie based on The Dukes of Hazzard?'” But the director pointed to the profitability of movies, including The Help, Black Swan and The King’s Speech, as evidence that, “no matter what the technology, story still beats everything.”

When the director and wife Bhavna founded the M. Night Shyamalan Foundation in 2001, Shyamalan, who runs the organization’s domestic arm, started by thinking, “What’s a realistic thing I can do to give back to Philly? Obviously, it came down to education, but in the beginning it was a search…. [Philadelphians are] super loyal, we’re crazy loyal. If we marry someone, we bring them back here to live. We stay here forever.”

The foundation has helped fund the launch of the Knowledge Is Power (KIPP) Program’s first three elementary schools in the area, and is working with Teach for America on efforts to close the achievement gap between low income and affluent students. Internationally, the organization has provided support to the Tanzanian Children’s Fund, which aids orphaned and vulnerable children in that country, and The Samburu Project, which partners with communities in developing countries to bring clean, safe drinking water. Shyamalan is also working with Givology, a website launched by students at the University of Pennsylvania that raises money for scholarships and education projects in the developing world.

A big part of creating the impact Shyamalan desired from the Foundation was learning to take advantage of the knowledge and expertise that already existed within the communities and organizations he was trying to help. “It’s a common roadblock in philanthropy that foundations come in knowing what they want to do and having their own great ideas. The very first thing we did was give $500,000 to [a cause], and nothing happened. It had no tangible results of any kind. We gave another big donation, and nothing happened,” Shyamalan recalled. “The learning curve happens really quickly. You realize that there is a lot of money out there … but it’s the human capital that’s needed around the world…. That changed our whole format of thinking about our Foundation. We started finding those individuals who had been vetted by life, who had proven that their point of view was having an effect in their communities. We ask them what they need and we say, ‘We’ll back you, we’ll support you.'”

Shyamalan tries to create a similar atmosphere on his movie sets, where he says everyone’s point of view is considered valid no matter what their place in the production’s hierarchy. “If I’m not getting something out of an actor, that’s my fault. They’re insecure, and I’m not getting them to feel safe enough. You have to become trusted and be vulnerable with them.” Though the director said he’s “not a yeller,” he admitted to being “very specific” about what he wants.

He also tries to live by “The Four Agreements,” a set of principles put forth by Mexican author Don Miguel Ruiz in his 1997 book of the same name. The first is, “Be impeccable with your word,” which Shyamalan interprets as meaning “every word is like a spell that you’re putting on the world. It should be an act of truth, you don’t want to generalize and send the wrong [message] out.”

The second is, “Don’t take anything personally,” — “that one I’m not so great at,” Shyamalan admitted. But he has worked hard to try to see the broader perspectives of arguments he has about matters related to his films. “The wider you get on perspective, the less personal you’re taking the conflict.” The third agreement is, “Don’t make assumptions.” “That one I’m terrible at,” Shyamalan noted. “I’m always making assumptions about what people are going to do. But I really try to analyze myself about these things.”

The fourth agreement is, “Always do your best.” “I want to be as truthful as possible and as courageous as possible. People always ask how come Paul McCartney doesn’t write great songs anymore. You lose the will to fight at that level, the will to be courageous, because as a human being we’re meant to be very efficient,” Shyamalan said. “Our brains become very efficient at everything, and we round off all the edges. I believe that whatever scars you’ve got, you go do that. That has helped me stay a student of everything, of life.”

"Writer/Director M. Night Shyamalan on the Catch 22 of Branding and the Power of Point of View." Knowledge@Wharton. The Wharton School, University of Pennsylvania, 07 December, 2011. Web. 08 December, 2021 <https://knowledge.wharton.upenn.edu/article/writerdirector-m-night-shyamalan-on-the-catch-22-of-branding-and-the-power-of-point-of-view/>

Writer/Director M. Night Shyamalan on the Catch 22 of Branding and the Power of Point of View. Knowledge@Wharton (2011, December 07). Retrieved from https://knowledge.wharton.upenn.edu/article/writerdirector-m-night-shyamalan-on-the-catch-22-of-branding-and-the-power-of-point-of-view/

"Writer/Director M. Night Shyamalan on the Catch 22 of Branding and the Power of Point of View" Knowledge@Wharton, December 07, 2011,
accessed December 08, 2021. https://knowledge.wharton.upenn.edu/article/writerdirector-m-night-shyamalan-on-the-catch-22-of-branding-and-the-power-of-point-of-view/