It’s the lament voiced by many a post-grad: When did the ideal Friday night become a full Netflix queue and a bowl of popcorn shared between friends rather than hours of club hopping? But Wharton marketing professor Cassie Mogilner says that this shift in priorities is no reason to fret — it’s merely evidence of how people’s definition of happiness changes as they become older.

In a series of papers — “Happiness from Ordinary and Extraordinary Experiences,” co-authored with Dartmouth professor Amit Bhattcharjee; “How Happiness Affects Choice” and “The Shifting Meaning of Happiness,” both co-authored with Stanford professor Jennifer Aaker and MIT professor Sep Kamvar; and “The Pursuit of Happiness: Time, Money and Social Connection” — Mogilner looks at the different experiences and emotions that factor into human contentment, finding that happiness isn’t just one thing, but also isn’t as unique to each person as we might think.

In this conversation with Knowledge at Wharton, she discusses her findings and their implications for both consumers and marketers.

On the connection between time and happiness:

I research people’s happiness, and what I’ve found across the work is that time plays a critical role. For instance, I’ve looked at what is the effect of merely drawing people’s attention to time, as opposed to our other resource of money. How does that impact people’s levels of happiness? How do age and, more specifically, the amount of time people feel like they have left in life influence both how people experience happiness, as well as the types of experiences that elicit greater happiness?

“When a 20 year-old says, ‘I feel happy,’ and when a 60 year old says the very same thing … they’re likely feeling very different things.”

For example, I have found that focusing on time leads to greater happiness than focusing on money. The way that I explored that was building on prior work, which tracked how people spend their days and also how people feel over the course of their days, finding that people are happiest when they are connecting with other people. They’re least happy when they are doing work or commuting. I wanted to see if thinking about time vs. money would influence people’s tendencies to behave in particularly happy or unhappy ways.

In one study, I looked at a context in which people both connect with others, as well as do work — namely, at a café. As people were entering the café, I asked them to fill out a survey. That survey involved a sentence unscrambling task, which surreptitiously exposed them to time-related words or money-related words. Afterwards, they entered the café and unbeknownst to them, we observed how they spent their time there, noting the extent to which they were connecting with other people at the café, talking to others or on the phone, and the extent to which they were doing work, either on their computers or reading books.

The other work I have done found that age influences how people experience happiness. The way we looked into this initially was looking at how people express feeling happy on their personal blogs. We looked at millions of blogs. Any time someone wrote “I feel” or “I’m feeling happy,” we looked at the content of that emotional expression. We found that there are really two forms of happiness that emerged — one that is tied to feeling excited, and the other that is tied to feeling calm.

The most surprising conclusions of the research:

I thought it was really interesting that when a 20 year-old says, “I feel happy,” and when a 60 year-old says the very same thing … they’re likely feeling very different things. One will be feeling excited, and the other, a greater sense of calm. I also think it’s surprising — and actually quite nice — that ordinary experiences, those little moments that pop up every day, can produce as much as happiness as extraordinary moments. I think that’s really powerful in terms of where people find the happiness in their life. 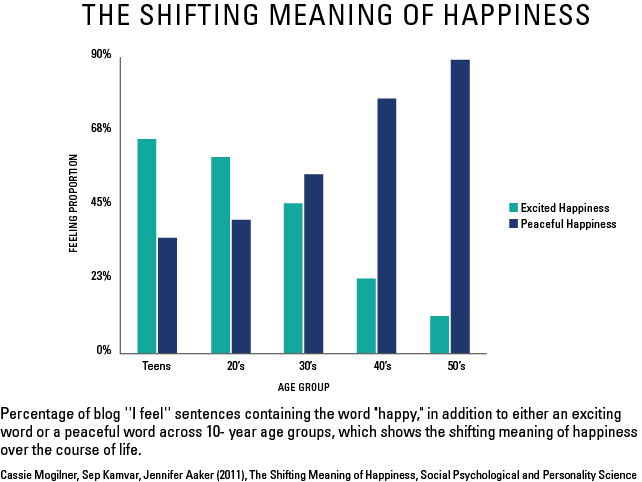 On the practical implications:

An interesting implication for consumers, or really anyone who’s interested in feeling happy, is to shift attention away from money, which is a resource that tends to absorb most of our attention and our thinking and planning on a daily basis, and shift attention to this fundamentally precious resource of time. Making that shift will remind you and motivate you to behave in ways that are happier, and to spend your time in more fulfilling ways.

“You shouldn’t evaluate or assess your level of happiness, or hold yourself to a standard, based on a concept that you had when you were younger.”

Another implication is to understand that what makes you happy, and even the way that you feel happiness, will or has changed over the course of your life. So you shouldn’t evaluate or assess your level of happiness, or hold yourself to a standard, based on a concept that you had when you were younger. You should allow yourself to accept and appreciate that it is maybe those quiet moments, those calming moments, where you really will find happiness. It doesn’t mean that you’re boring if you’re fired up about a Friday night on the couch watching TV or movies.

What this means for marketing:

The research has tremendous implications for marketers in two ways. First, you see more and more examples of marketers through their campaigns and branding trying to really connect with consumers on a fundamental level by promising happiness. And what it suggests is that they should think about, first of all, who they are targeting. What demographic are they trying to speak to, older or younger individuals? And relatedly, how should they be communicating the happiness they’re promising? Is it excitement, with loud colors, high energy and intense color? Or should they be conveying happiness as a more tranquil, serene, calm type of happiness to really connect with and resonate with an older consumer?

In addition, there is a trend toward dialing up the experiential aspect of your product or brand. It’s suggesting that, again, marketers should consider who they’re looking to connect with and speak to in order to inform the types of experiences that they are positioning themselves with a respect to. Is it exciting, extraordinary, types of experiences? Or is it those more every day, mundane experiences that will really resonate with their target consumer?

How “Happy” (the song) relates to the research:

There was a news story from a couple of weeks ago when six Iranians were arrested for posting on YouTube a video of them dancing to the Pharrell song “Happy.” First of all, the fact that the Pharrell song “Happy” has become a phenomenon in and of itself suggests that this emotion of happiness is so fundamental and so motivating and so resonant with people. And the fact that there’s been such an outpouring of support and care for these young Iranians who were arrested for the act of celebrating and sharing their happiness just goes to show how effective this emotion of happiness is.

“Happiness is not a singular thing that people are pursuing and will someday find. It’s also not purely idiosyncratic and something different to everyone.”

On the misperceptions dispelled by the research:

Happiness is not a singular thing that people are pursuing and will someday find. It’s also not purely idiosyncratic and something different to everyone. Instead, there is predictable regularity in how people experience happiness, as well as in the experiences that elicit happiness. Also, there is a systemic shift over the course of people’s lives whereby when people are younger, happiness is more about feeling excited, and as people get older, happiness is more about feeling calm.

On what sets the research apart:

I’m exploring several different paths all related to time and happiness. One project is looking at happy ways of spending time. We’ve been looking at whether people should be filling their days with more variety vs. less variety. And so far, it suggests that in general, variety is actually the spice of life. People enjoy greater happiness from more varied activities. But that is not the case when you get to smaller partitions of time, like an hour. And in these cases, too much variety makes you feel like you haven’t gotten anything completed.

In other work I am doing with a doctoral student, we’re exploring the impact of giving time on the extent to which people feel connected with other people — specifically finding that when people give experiential gifts, the gift of time, the recipient feels more connected to their gift giver than if they had received a material gift. And finally, I’m doing work looking at whether people would prefer feeling happy over the course of an hour, or their life, or whether they would prefer feeling happy looking back on that hour or life. What are people’s preferences between experienced vs. remembered happiness?