Wharton MBAs who became entrepreneurs can be considered “significantly happier” than most other MBAs, if you don’t control for how much money they made, says Ethan Mollick, who is researching that and other issues along with fellow Wharton management professor Matthew Bidwell. “Two things tend to make people happy — money and age,” says Mollick. “The more money someone earns, and the older they are, the happier they are in general, which was also borne out” by the study, based on nearly 11,000 Wharton MBAs who responded to the survey sent to 30,000 graduates since 1990.

Mollick suggests these groups are happier because they experience a better work/family balance and more job satisfaction. And even though entrepreneurs may “work more hours, they have control — more choices, though that is speculation.” There are “real benefits to being your own boss.”

In the survey, “we find not many become entrepreneurs right after business school, but somewhere above 20% have a stint as an entrepreneur at some point in their careers, even if they were not expecting it,” Mollick adds.

A related report on this study can be found on the Wharton Entrepreneurship Blog.

Some survey results appear below (click the image to enlarge). 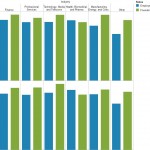