Stanford's Leah Weiss discusses her recent book on how mindfulness can help people become happier and more effective at work. 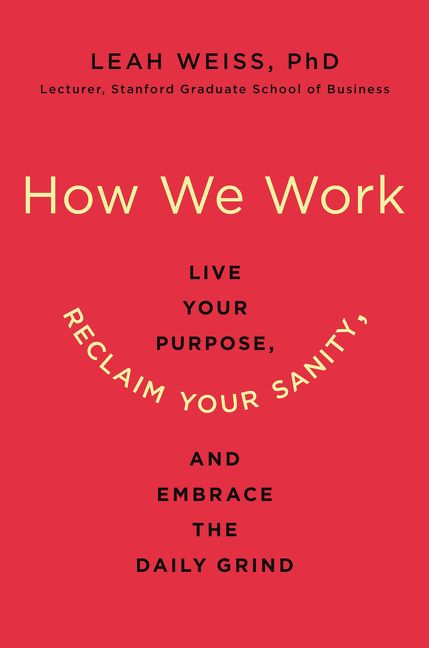 Work is more demanding and competitive than ever, which is leading to higher rates of stress and burnout for employees and managers alike. But there is a better way. In her latest book, Leah Weiss, a lecturer, researcher and meditation expert at Stanford University, offers a path of enlightenment and understanding that focuses on mindfulness in the workplace. She recently appeared on the Knowledge at Wharton show on Wharton Business Radio on SiriusXM channel 111, to talk about the lessons in her book, How We Work: Live Your Purpose, Reclaim Your Sanity, and Embrace the Daily Grind. (Listen to the full podcast using the player at the top of this page.)

Knowledge at Wharton: You aren’t just writing about mindfulness, but you’re also teaching a course on it at Stanford, correct?

Leah Weiss: That’s exactly right. I think it has become one of the critical skills for 21st century leadership. In a time where we have so much distraction and so many pulls on our attention, we need to learn to manage how we are focusing, which is one of the key elements. That’s a real driver for a lot of people.

Knowledge at Wharton: What really started to change the workplace? You mentioned at the start of the book how some of the old philosophies of running an office — like the annual review and various competencies — are not perceived as important as they were 20 years ago.

Weiss: I think it’s because of this crisis in engagement that we’re facing now, where only one in three people can actually tell you what their role is at work. Two out of three people don’t know what they’re doing, so of course they can’t be engaged in it. And even if they know what they’re doing, they’re distracted by competing demands, including technology that’s designed to grab our attention. It becomes vital for us to prioritize the way in which we are working, the “how” we work.

The technical side of our work is changing so rapidly that we need to be focused on how we learn, how we can get ready for new information. Part of that is our ability to bounce back when we fail or when we don’t understand. And part of that is our ability to collaborate with other people. There is a study in The Wall Street Journal interviewing about 900 executives, and 90% of them said that the soft skills are just as, if not more, important than the technical skills. And 89% said they’re having trouble finding people with these soft skills, with the emotional intelligence to be ready for today’s workplace.

Knowledge at Wharton: Does the impact go all the way up the organizational chain?

Weiss:  Yes. We had Jeff Weiner, the CEO of LinkedIn, visit my class at Stanford, and we were talking with him about how he’s prioritizing hiring and what it looks like to develop talent at LinkedIn. In his mind, skills like compassion were key. They were not nice-to-haves. That’s the main thing that the looks for, that he vets for.

… Twenty-two percent of companies in 2016 had some mindfulness program going on, and that number was projected to double in 2017. I don’t have the updated statistics because they’re still being analyzed. It’s not only a tech, Silicon Valley thing anymore. I do work with organizations in health care, in finance, in education — you name it. I think people are really recognizing this is a key competency now.

Knowledge at Wharton: You worked with health insurer Aetna. How does that company go about encouraging mindfulness for employees?

Weiss: Aetna is such an interesting company. They’ve been ahead of the curve with the analytics on the impact that mindfulness is making in their business. What they’re finding in their employees is an average of $3,000 of increased productivity, a little over an hour a week per employee who has engaged in the mindfulness training. They are really taking it seriously. They had something called a chief mindfulness officer, and they’re really looking at what is the best way to roll out these programs internally so that they can continue to leverage this impact.

Knowledge at Wharton: Is it important for Aetna and for other companies to have a C-suite officer running this just like any other segment of the company right now?

Weiss: Absolutely. I have people making the comparison to how many people you have in the hospital who are focusing on infection control. If we see the impact that mindfulness has on safety and on outcomes for patients in reducing health care errors, how can we not start staffing and looking at this as a real way that we can improve the quality of work?

“If we see the impact that mindfulness has on safety and on outcomes for patients in reducing health care errors, how can we not start … looking at this as a real way that we can improve the quality of work?”

Knowledge at Wharton: We talk about mindfulness as one entity, but you break it down into three elements. Can you explain?

Weiss: Mindfulness research spans such a broad number of ways that it can impact people, from behavior change to emotion regulation. Somewhat surprisingly to me, emotion regulation has been one of the key drivers for the students who sign up for my class. They are very interested in how they can learn to be both more authentic leaders, where they have confidence in expressing who they are in the workplace, but also that they’re not going to fly off the handle. Many of them have been in the workforce, and a lot of them in startup positions or other really demanding roles where they’ve seen the downside of emotional suppression. They’re very motivated to learn how to deal with their emotions more effectively, which is consistent with the research. It doesn’t just help you with your interpersonal relationships, but it’s also going to have a long-term health impact.

Knowledge at Wharton: You’re basically talking about understanding our bodies better. With a 24/7 work schedule, it is more important to understand your physical and emotional limits.

Weiss: I’m seeing more and more young people with chronic pain. Then you hear stories like the one of Arianna Huffington having this realization through a very physically dramatic experience of running herself into the ground. I think people are more aware that this is not a good long-term strategy.

Gone are the days that people are [asking], “Who has the cool ping pong table?” or “Who’s got the best food?” It’s really like, “Who’s committed to a compassionate self-aware workplace? Because if I’m going to commit to them, I need them to be committed to me.” I have students all the time asking me, “How can I recognize the companies that are committed to it?” I’ve been using the term mindfulness-washing, to sort of follow on the green-washing, like presenting “We’re a really mindful company.” But it’s more about the optics versus the companies that are actually committed to running the day-to-day activities, the teams, the way work is assigned, the compensation. There are companies that are really looking to do that. Aetna is a great example.

Knowledge at Wharton: A lot of students just want to graduate and get that first job to build their careers. But you’re saying that more students are taking these elements into account, even before they go for those first interviews?

Weiss: Yes. What we’re seeing, and this is consistent with the research, is that you can get your first job based on your technical competency, but you will get bottle-necked in short order if you don’t learn these other skills because you will be evaluated on your ability to inspire teams, to communicate well with others. These are all the soft skills.

Knowledge at Wharton: Many companies now prefer a team approach to projects, so you need to have good relationships to get things done, right?

Weiss: That’s absolutely right; you cannot work without interacting with a lot of other people. Interestingly, I’ve been spending more of my time consulting with companies who are trying to really ask this question, “What does it look like within our company to put this into all of the meeting culture and physical layout, and in-house training so that it really can be something that is running throughout the organization?”

“[You] can get your first job based on your technical competency, but you will get bottle-necked in short order if you don’t learn these other skills because you will be evaluated on your ability to inspire teams, to communicate well with others.”

Knowledge at Wharton: But there are times when people who are working together just don’t mesh. There can be some toxicity to it. How are companies trying to deal with that?

Weiss: Part of what we’re seeing is an increased attention being paid to communication, to candor. Of course, these things need to be balanced with skillfulness, with compassion, so that teams are really learning. Everybody’s familiar with the Google studies about the high-performing teams, and that it all comes down to psychological safety. Well, how do you do that? You do that by understanding what another person’s perspective is. What makes them scared? What motivates them? What triggers them? These are skills that, building off of mindfulness, support the interpersonal relationships and the authentic relationships. If we understand each other, we can help support moving in the best possible direction for the team because we all think we’re swimming together.

Knowledge at Wharton: Everything you lay out says that from the C-suite on down, compassion needs to be a part of the overall work perspective.

Weiss: If it’s not, then there’s a very practical negative impact that happens if people are not treating each other well. It’s not just if I’m working in an organization and have a sick relative, and I’m treated badly. Of course, that’s going to impact my long-term loyalty to the organization. But the research also shows us that if we are in the same organization and you’re watching me not be cared for, your loyalty is also going to go down. I think that there’s a logic to this. It’s just kind of taking back what we know to be true about how we all want to be treated.

Knowledge at Wharton: Where will this movement take us in 20 or 30 years?

Weiss: All the time when I’m teaching, I think about my children. I believe that when they enter the workforce, there could be a really different climate. I think we’re not going to have the same issues with #MeToo and sexual harassment and real crises in inclusion in the workplaces that manage to be diverse. I think if we can get back to some of these fundamentals, then we are going to be so much better off as not just organizations, but as a world.