Markets are collapsing because investors hate uncertainty. Will COVID-19 be as bad as last year’s flu? Will it be 10 times as bad? No one knows. But markets are acting as if we are going to encounter the worst-case scenario, notes Eric K. Clemons in this opinion piece. Clemons is a professor of operations, information and decisions at Wharton. Analyzing four possible scenarios that the pandemic’s evolution could take in the future, Clemons argues that the market reaction is more extreme than any of the likely possible futures would justify. The markets are reacting to uncertainty rather than to expectations, he writes.

Why are the markets collapsing? Why is it impossible to find hand sanitizer in the U.S.? Why are my Chinese friends sympathetically offering to ship me anti-viral face masks, since they have learned that panic buying has eliminated supplies in the West? Are the markets over-reacting? Is the panic justified?

Let’s review what we know and what we don’t know about COVID-19, and let’s approach the risks rationally.

Public-health officials, global risk management experts, and others have been warning about a new Plague, a global pandemic, for decades. Higher population densities, the ease of global travel and super-bug strains of centuries-old killers that are resistant to all known antibiotics are all factors. We have been warned of a global plague of biblical proportions, something with Pestilence, Famine and Death, with at least three of the Four Horsemen of the Apocalypse.

Relax. This is not that Plague.

What We Know – and Don’t Know

Let’s reduce that uncertainty. Let’s review what we all know, and what none of us knows.

COVID-19 is a new coronavirus, like the common cold and the flu. Since it’s a new coronavirus it was initially named simply Novel Coronavirus. Although COVID-19 sounds scarier than Novel, like some­thing out of a horror novel, this is not Michael Crichton’s Andromeda Strain or Kurt Vonnegut’s Ice Nine. Even in a worst-case scenario, in which we all get sick, we are not all going to die.

We know a lot about coronaviruses because they are not new. They’ve been with us for centu­ries. Many of them are zoonotic, which means they mutated and jumped to humans from animals. That’s why we deal with Swine Flu and Avian Flu; their initial hosts were domestic livestock.

We know COVID-19 has achieved permanence. The virus is established globally. Enough people have the virus in enough locations to ensure that it is not going to vanish on its own. It can no longer be contained.

Mutation is a critical aspect of most coronaviruses. That’s why we have no vaccine against the common cold, and why we never develop immunity to the common cold no matter how many times we catch colds. Every season’s cold virus is just different enough to ensure that neither last year’s immunity nor last year’s vaccine would offer any protection. The mutation rate in the flu is lower. That’s why we can develop vaccines and why we have some immunity to future strains of the flu after we have contracted the flu in previous seasons. We don’t know how extreme COVID-19 mutation will be.

The markets are over-reacting. They are acting as if we are going to encoun­ter the worst-case scenario.

Because of mutation, lethality also varies. Let’s assume that this year’s COVID-19 is about aver­age for future strains. This year’s strain is about four times as lethal as an average flu season, but at present we have no residual immunity from infection in previous years. That probably will change, and we probably will develop some residual immunity that will be helpful in future years. I’m going to assume that once COVID-19 is fully established on average it will be about as lethal as the flu, but I’m guess­ing. We don’t know how lethal COVID-19 will be.

Scenario analysis allows us to combine what we know and what we don’t know to generate a set of all possible futures. We may have high or low lethality and high or low mutation rates. This yields four scenarios. Three of these combinations are delightfully, reassuringly, boringly familiar. 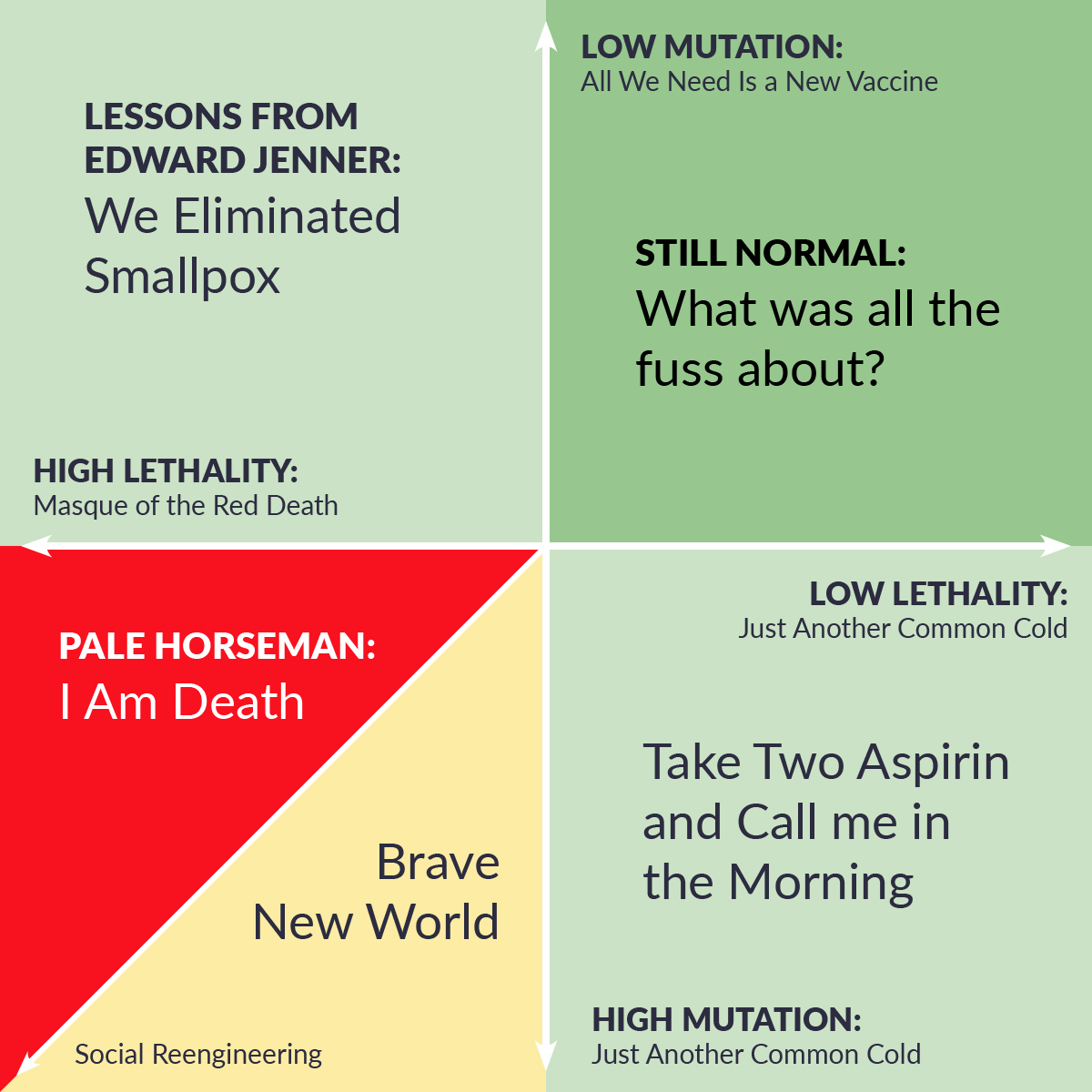 So, really, the only combination we would need to worry about is high mutation and high lethal­ity. Fortunately, this is the least likely of the four combinations. The “objective” of a virus, if a strand of DNA or RNA could be said to have an objective, is to produce as many copies of itself as possible. If a virus is too lethal, it kills its hosts too quickly and it doesn’t infect enough people for optimal virus reproduction. Over time, natural selection usually reduces the lethality of a virus or any other parasite. Quite simply, there is an optimal level of lethality that allows maximum reproduction and transmission of the virus.

Crudely speaking, that’s why long-term parasites like the common cold, another coronavirus, is so much more prevalent than Ebola, and while remaining deadly even Ebola’s kill rate and kill speed have declined. Still, waiting for natural selection to tame a virus is not an optimal strategy for the hosts. If we find ourselves dealing with high lethality and high mutation rates for an extended period, soci­ety would need to develop an effective response. It is not certain that we can do so.

If we are spectacularly unlucky, COVID-19 will turn out to be lethal with a high mutation rate. While this scenario is not the most likely, it is the most critical. For that reason, I divide it into two sub-scenarios, based on the effectiveness of societies’ responses.

1. Brave New World: Remember, this scenario assumes lethality high enough to require a vaccine and mutation rates high enough to make a vaccine unlikely. It likewise assumes that this condition continues for an extended period. In this scenario we assume that technical and social engineering changes provide an effective response. White-collar professions attain a high degree of virtualization. Executives and their staffs telecommute. Faculty and their students engage in distance learning. Farm work continues largely unchanged. Blue-collar workers mostly are replaced by increasingly intense levels of automation, and social programs are developed to avoid total devasta­tion of low-income populations. Medical treatment for all COVID-19 patients becomes the law of the land throughout the developed world, if for no other reason than the wealthier segments of the population do not want to risk contamina­tion from untreated members of the lower-income segments of the popula­tion. The scenario is shown in a cautionary amber.

Successful transition into the Brave New World scenario is by no means certain. Could countries with highly skewed income distribution like Brazil and India afford to support their desperately poor urban slums? Would they choose to do so? Would the most disadvantaged populations in the world, Bangladeshis and the residents of Sub-Saharan Africa, perish in vast numbers while other parts of the world escape relatively unscathed? Mass migrations and floods of refugees would be unprecedented; think in terms of half the world’s population under­taking migrations on a level comparable to the Irish migrations during the Potato Famine of the late 1840s, while the other half of the world experiences the worst economic crisis in a century. Responses would be brutal, and pogroms would be universal. Anyone who was for­eign, or who even was other, would be seen as both as a potential source of disease and as a potential economic burden.

2. Pale Horseman: I am Death: Once again, this scenario assumes lethality high enough to require a vaccine and mutation rates high enough to make a vaccine unlikely. How­ever, it also assumes that it is impossible to develop an effective response. Class war­fare erupts between wealthy and impoverished populations throughout the developing world. Mass migration and ethnic warfare erupts between the Third World and the more fortunate segments of the population. Lack of effective leadership does not save the wealthy nations of the West. This is brutal, and is shown as a dangerous red.

What is our final assessment? The markets are reacting as if the most likely scenario — indeed the inevitable scenario — is Pale Horseman: I am Death.  This actually is the least likely scenario. It assumes rapidly mutating virus with continued high lethality for an extended period, which really is something out of a science fiction novel. The markets are over-reacting.

Unfortunately, the most likely scenario is a more extreme version of Take Two Aspirin and Call Me in the Morning. COVID-19 will be like the common cold, only worse. We are all going to have to adapt to increased socially responsible behavior by individuals who believe themselves to be sick. We are going to require increased socially responsible behavior from employers, granting greater numbers of sick days and provide incentives for sick employees to stay home until they are no longer contagious, instead of returning as soon as they are able to perform adequate­ly at work. This will require a more generous governmental response, with assurances that employees will not suffer financial losses taking sick leave because they are ill, or because family members are ill, or because they have been exposed to the virus.

This would be expensive for business and would require governmental support for businesses that are increasingly paying absent workers. And we are going to require increased public health spending, so that every­one, insured or not, legal resident or not, can have safe and anonymous testing for COVID-19. Any attempt to limit testing so that only insured legal residents could be tested would make the virus impossible to control. Likewise, any attempt to limit confidential and anonymous testing, for any reason, will make the virus impossible to control. We learned this from previous public health emergencies, like the initial spread of HIV/AIDS.

Returning to the markets, I believe that the markets have over-reacted and that they will recov­er. If you are light in equities now or have available cash, it might be a reasonable time to invest. But you need to be patient, since recovery will not be immediate. Do not invest money you will need soon.

And what about life in general, beyond your investment strategy? Be prepared for inconven­ience, for disruptions in travel plans, and changes at work. Don’t panic. And remember to wash your hands.