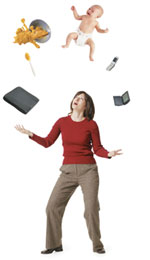 Women in urban India have easy access to domestic help: A full-time maid, cook or driver are not uncommon in their households. Of course, these are luxuries that most working women in the rest of the world can only dream about.

But a recent survey by global research firm Nielsen illuminates another picture. Covering 6,500 women across 21 developed and developing countries, the study’s results show that women in India are the most stressed out. Of the respondents in India, 87% said they felt stressed most of the time. They are followed by women in Mexico (74%), Russia (69%), Spain (66%), France (65%) and Italy (64%). In the U.S., the number is at 53%.

What exactly is weighing on women in one of the fastest growing economies in the world? The Nielsen survey’s respondents point to the requirement of managing multiple roles.

One could well argue that this particular condition exists for women across the globe: Juggling roles at home and work are a given. There is a difference in India, however, says Nirmala Menon, founder and CEO of Interweave Consulting, a Bangalore-based firm that focuses on diversity management and inclusiveness in the workplace. Menon notes that even as career opportunities for women in India are on the upswing, the support structure and social mores have not kept pace. “Nor has the internal psyche of the Indian woman,” adds Menon. “Despite ‘modern’ times, traditional expectations of women are still conveyed in subtle but consistent ways. The Indian woman has far more familial interfaces to manage than her western counterpart.”

According to Hema Ravichandar, human resources advisor and formerly the global head of HR at IT firm Infosys: “Regressive mindsets in society and the workplace; a culture that rewards performance based on effort — with the number of hours spent [working] as proxy indicator — rather than result; rigid work policies which do not factor in the need to spend extra time at home during critical phases like childbirth, adoption, etc., are unique to India.”

There are other reasons, too. Technical infrastructure support and enablers are at a nascent stage in the country as compared to the developed economies. Options like working from home, flex-time, telecommuting and so on have arrived only in the recent past in new industries and are still evolving. “Even in companies which have these facilities, it is not construed as the right thing to do if you are serious about going up the corporate ladder,” says Ravichandar.

A lack of women in executive roles mirrors this. A report by Standard Chartered Bank points out that women constitute only 5.3% of the total number of board members in the top 100 Indian companies by market capitalization on the Bombay Stock Exchange. This is much lower than in other countries, including Australia (8.3%), Hong Kong (8.9%), the U.K. (12.2%), the U.S. (14.5%) and Canada (15.0%). The number of Indian women in middle and senior management roles is not much higher.

Meanwhile, the latest employment data show that worker participation (the ratio of workers to population) fell to 39.2% in 2009-2010 from 42% in 2004-2005. While the decline is marginal for men — from 55.9% to 55% — it is significant in the case of women — from 29.4% to 23.3%. Analysts say that one reason for this is that as men in the family start earning more, women, especially in the lower middle class, opt out of the work force for reasons of social status. In his column in the daily newspaper Times of India, Swaminathan Anklesaria Aiyer noted: “Social mores, especially in the lower middle class, give superior social status to households where women don’t work. When a family with rising income decides to keep females at home, it literally buys social status with the income foregone.”

But the survey’s implications go beyond individuals or families. All of this has wide ramifications for India’s continued economic growth. If the support structure and attitudes towards women, both in the workplace and in society at large, don’t change, women will either simply opt out of the workforce or — faced with endless stress — be far less productive than their true potential. This will result in a sharp blow to the country’s demographic dividend, which though touted as a key factor in India’s growth, is under its own stress. The window for growth is small and, as Ravichandar points out: “Having women as part of your workforce is no longer a nice-to-do but a must-do.”