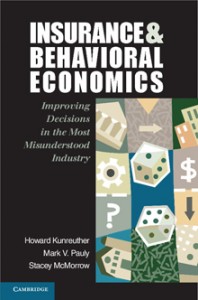 During their decades-long collaboration on market studies, the two compiled notes on the ways that insurance companies, consumers and regulators get it wrong — Pauly describes it as “a rogue’s gallery of insurance anomalies.” That collection ultimately became so substantial that they turned it into journal articles and then into a book titled, Insurance & Behavioral Economics: Improving Decisions in the Most Misunderstood Industry, to be published in December.

Why “misunderstood?” In an interview in the LDI Health Economist, a publication of the Leonard Davis Institute of Health Economics at the University of Pennsylvania, Pauly identified some of the reasons insurance buyers and sellers misconstrue each other’s intentions and responses so frequently. Topping the list is consumers’ widespread uncertainty about predicting risk or estimating probability, and a time-lag sense of entitlement to things that weren’t actually purchased in a transaction.

“Insurance is a contract where you pay your money up front and then whatever you’re going to get from it, you get later on,” Pauly said. “But just like a pre-paid vacation, that can be a recipe for frustration: People arrive at the hotel and believe they are entitled to free Mai Tais even though the fine print of their confirmation says they’re not. The thing I think people do understand — but want to pretend they don’t understand about insurance — is that if you didn’t pay for it and it was not specifically in the contract, you’re not entitled to it. Once consumers have paid their insurance premiums, many really do want to think they’re entitled to be paid for anything bad that happens to them.”

Insurers, Pauly said, “have just the mirror image. They see themselves as promising a certain number of things for a certain amount of money; and if you didn’t pay them for it, they shouldn’t be required to deliver it to you.”

However, he pointed out that the book doesn’t just target consumers’ foibles. “There’s plenty of blame, stupidity and irrationality to go around” for insurers and government regulators as well, he noted.

“We’re aiming this book partly at scholars and partly at people in the insurance industry who are sometimes inept in explaining what they do and why,” Pauly stated. “We say, ‘You’re often as irrational as consumers even though you have much more at stake.’ Hopefully, the book will make insurers think more carefully about what they do and also give them a little bit of defense for some of the things that need to be explained to consumers, regulators and policy types.”

Another goal of the book is to establish a benchmark for good insurance performance, then explore how various markets succeed or fail at meeting that benchmark.

“The majority of insurance dollars spent in the U.S. are spent in markets that are functioning fairly reasonably, but there are some markets where it’s totally nuts,” he said. The book makes an effort to compare the two different kinds of markets to identify characteristics that predict potential problems…. The book not only discusses anomalous insurance markets, it also discusses non-anomalous insurance markets because it wants to identify the characteristics that tend to predict anomalous behavior.”

One of the markets the authors scrutinize is health insurance, and their conclusions may surprise many.

“I don’t feel as bad about health care insurance after writing this book as I did before,” said Pauly, “because compared to a lot of other insurance markets, it’s not nearly as messed up. The kind of insurance sold even before the Affordable Care Act [ACA] provided pretty good coverage against low probability catastrophic events, which, in this case, is the potentially bankrupting circumstance of becoming a hospital in-patient.”

Health insurance performance behavior “was better than other kinds of insurance,” he said. “For instance, in terms of flood insurance, a consumer could say, ‘It will never happen to me because I haven’t seen a flood in my neighborhood in quite a while.’ But they do see catastrophic health events often enough to know that these aren’t that low a probability. So, from that point of view, health insurance looks better than average.”

One of the things the ACA is trying to address is that “if you buy your health insurance as an individual, there are really high administrative ‘loading’ and selling costs,” Pauly pointed out. “But the percentage of that for health insurance is about the same as other kinds of insurance people buy as individuals, like auto collision or homeowner coverage. That doesn’t mean it’s either bad or good. It just means that the imperfection and waste in the individual insurance market isn’t something unique to health insurance. It seems shared by virtually all insurances that people buy on a one-on-one basis.”

Pauly notes that many economists have their doubts about the ACA’s health insurance exchanges – competitive marketplaces designed to allow patients to buy insurance directly from a pool of different health plan options. He tells an economist joke to make his point: An economist and non-economist are walking down the street when the non-economist says, “That looks like a $20 bill over there. Why don’t you go pick it up?” But the economist keeps walking. The non-economist asks, “Why didn’t you go pick it up?” The economist says, “Don’t be ridiculous. If it was a $20 bill, somebody would have already picked it up.”

But he is keeping an open mind. “I try not to be an economist one day a week,” he said. “Then I say there might be some good new ideas in the exchange concept, but they will have to be invented from scratch.”

Another focus of the book is “deductible aversion” — consumers’ tendency to automatically select insurance plans with the lowest out-of-pocket costs, despite the premium reductions from reducing coverage a little.

“The typical homeowner’s policy,” said Pauly, “will have a $500 deductible. It turns out that if you bumped up that deductible to $1,000 or $2,000, the amount of premium you could save is generally much more than anything close to the average amount more you would lose in benefits. But people just like low deductibles.”

Ditto in health insurance, he said. “Many consumers and most policymakers are wary of increasing deductibles. But there’s a camp that believes that a more rational health insurance system would be one with high-deductible health plans of the kind that are, at the moment, winning the marketing battle in the group market. We will have to wait and see what kind of rationality or irrationality wins out.”