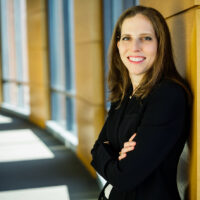 Slower earnings growth, shifts in technology, interest rates that could soon rise and record stock prices have combined to create a perfect storm for mergers and acquisitions. And some are concerned that the whirlwind also could be signaling dark days ahead.

Since the start of the year, nearly $1.55 trillion worth of deals — more than 8,000 combinations — have been announced in the U.S., according to financial markets research and analytics firm Dealogic. That includes five mega-deals in late October alone, pushing volume last month to $330.3 billion, second only to July 2015’s $332.3 billion record.

Worldwide, announced M&A deals year-to-date top $3.29 trillion, putting the year at a slightly slower pace than the record $4.7 trillion in 2015. That total bested the $4.6 trillion set in 2007, Dealogic data shows. “Everything comes broadly in waves, and we’re in an uptick again,” says Saikat Chaudhuri, executive director of Wharton’s Mack Institute for Innovation Management.

Indeed, data compiled by Wharton management professor Emilie Feldman shows that the recent upsurge bears striking similarities to prior waves in the late 1990s and mid-2000s. And while certain market conditions are different now, historical comparisons suggest the surge in deals may be nearing its peak.

Feldman’s research also shows that peak M&A activity reflects inflated stock prices, which is often followed by a market correction or crash. This happened in both the late 1990s with the tech bubble, and in the mid-2000s with the housing bubble. “Clearly, 2014 and 2015 look like the upswing of a new peak,” Feldman says, “so it’s easy to infer what happens next.” 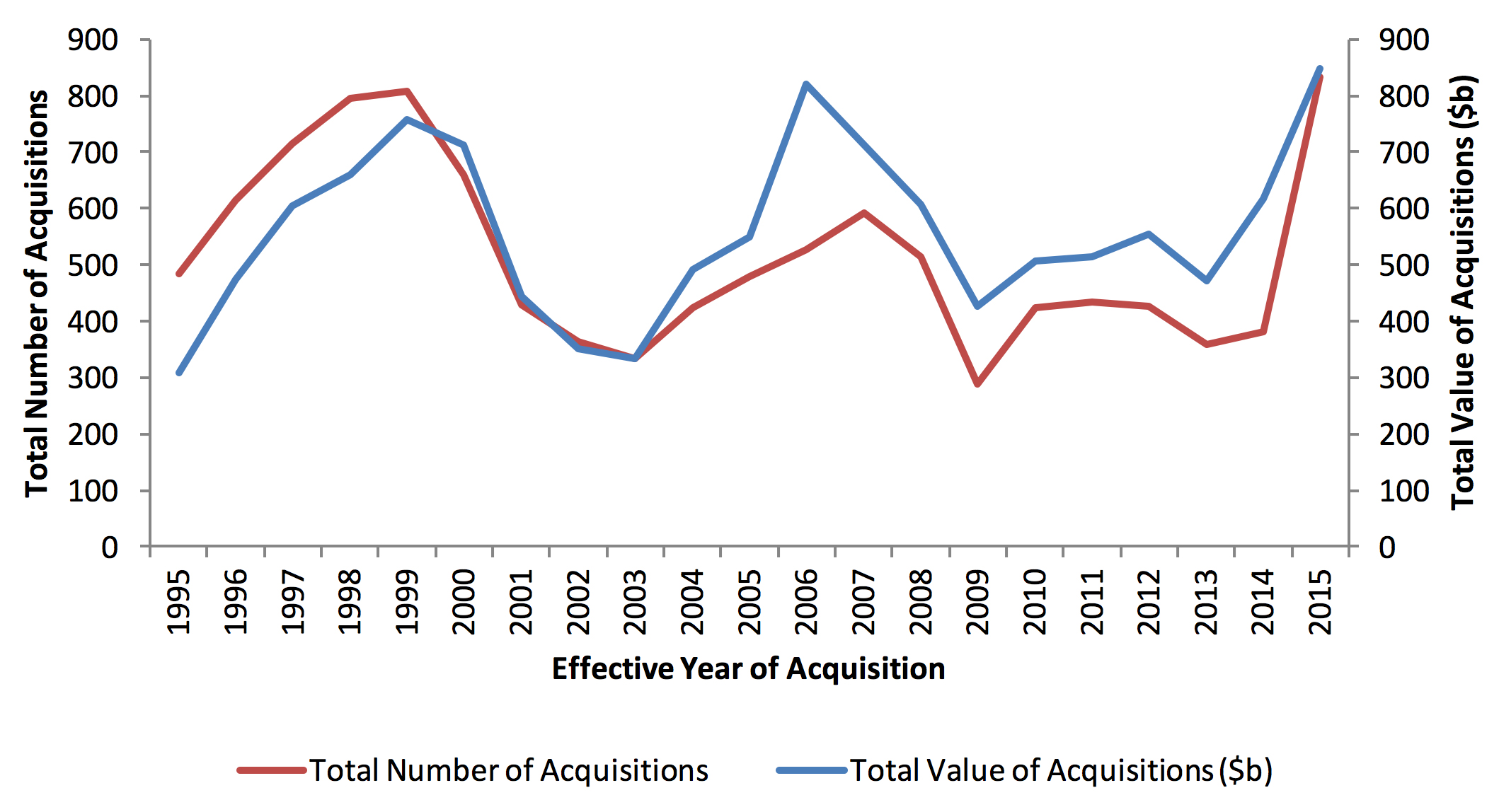 M&A activity undertaken by Fortune 500 firms between 1995 and 2015 based on data compiled by Wharton professor Emilie Feldman.

Last month was one of the busiest for M&A in over a decade. Among the most notable deals:

Those combinations followed a steady stream of major deals since the beginning of the year, including the $66 billion plan for Germany’s Bayer to buy seed and chemical giant Monsanto announced in mid-September; Microsoft’s $26.2 billion buyout of social network LinkedIn, struck in June, and Canadian energy infrastructure leader Enbridge’s pact in early September to buy Spectra Energy for $28 billion.

Since the start of the year, nearly $1.55 trillion worth of deals — more than 8,000 combinations — have been announced in the U.S.

There’s no one element driving the trend. Rather, it’s a confluence of market conditions and major changes in technology that are transforming multiple industries.

To be sure, one major influence is low interest rates. “Rates are expected to rise as soon as next month, which will make borrowing money more expensive,” says Feldman. “Striking deals now is a useful way to lock in the historically low rates we are seeing.”

In addition, companies are sitting on a lot of cash. “Corporate share buybacks, which had surged in recent years, have finally slowed down,” Feldman says. “So companies need to find alternate uses for that cash. Mergers and acquisitions fit the bill.”

Those piles of cash may grow even larger under the incoming Trump administration, which has pledged to reduce tax rates on repatriated earnings, notes Richard Peterson, senior director at S&P Global Markets Intelligence.

He calculates that non-financial and real estate companies in the S&P 500 have as much as $983 billion in cash stockpiled overseas. Favorable tax changes under the new president could free up a significant portion of the cash, and further encourage M&A.

The record level of the stock market also influences the pace of deals, Peterson says, because many companies use their shares as currency, creating higher premiums for sellers. The S&P 500, Dow Jones industrial Average and Nasdaq Composite Index are all at or near record highs.

AT&T, for instance, knows it will not be able to continue to rely on its phone services to drive growth, so it is aiming to vertically integrate. First, it closed on its purchase of satellite television service DirecTV last year for $48.5 billion. Now, it is combining with a major content provider. That’s not unlike the strategy Comcast executed when it bought NBCUniversal, with a goal of providing the programming as well as the delivery.

In contrast, Chaudhuri says, rival Verizon is pursuing digital advertising to boost its profit, with its $4.4 billion buyout of AOL last year and its planned $4.8 billion purchase of Yahoo, announced in July. All these company strategies reflect major changes in telecommunications and media, he says.

Likewise, the GE-Baker Hughes deal will create a new type of oil services company that combines an industry-leading equipment manufacturer with one of the top services firms. “There are fundamental things happening in these industries” that are pressuring these companies to come up with new business models, Chaudhuri says. “Those are fundamentally important deals that have been thought about and worked on for months.”

Deals like these are mainly traditional M&A transactions that are built around perceived synergies, adds David Bahnsen, managing director and chief investment officer for the Bahnsen Group.

“Everything comes broadly in waves, and we’re in an uptick again.” –Saikat Chaudhuri

Another category that has gotten a lot of attention, but in some cases has been stymied, is tax inversion mergers, aimed at reducing corporate tax levels by transferring ownership to lower-taxed countries.

Notably, one of the largest such deals, the proposed $160 billion combination of Ireland-based Allergan with New York’s Pfizer, fell apart in April when faced with new rules from the Obama administration. Prior examples include Minneapolis-based Medtronic combining with Ireland-based Covidien last year in a $49.9 billion deal, and Florida’s Burger King becoming Canadian using an $11 billion combination with Ontario-based Tim Horton in 2014.

Under President-elect Donald Trump, some are expecting tax reform that could reduce the desire for tax inversion strategies, and possibly see a good chunk of the corporate cash stashed overseas brought back to the U.S. and made available for new deals. “That could change the M&A landscape,” Chaudhuri says.

However, one wrinkle is that mega-deals like AT&T-Time Warner may be thrown out by the incoming administration as well. Trump pledged to block the combination, while also threatening to break up Comcast and NBC. It’s as yet unclear whether his regulatory appointments will pursue this threat, or whether it was more reflective of his anti-media campaign rhetoric.

Another significant contributor to the merger trend is the slow pace of profit gains. “Sales and earnings growth are at their lowest levels in five quarters right now and companies are searching for ways to solve this problem,” Feldman says. “It’s hard to grow revenues organically, and even harder to find new ways to cut costs. Mergers and acquisitions can solve both problems.”

Particularly in sectors like consumer staples, technology and pharmaceuticals, acquisitions can provide new markets, sales channels and geographies for acquiring companies’ products and drive revenue higher, she says. “And, they can create cost efficiencies by allowing companies to take advantage of economies of scale and scope, pricing and purchasing power and back-office consolidations.”

Acquisitions are also a useful way to supplement — or substitute for — internal research and development and innovation.

“Internal development is costly, risky and time consuming, so companies will often turn to M&A as a result.” Feldman says. Acquisitions can be cheaper, faster and less risky to get to market than internal R&D. “The major downside is that companies risk becoming overly reliant on M&A as a growth strategy” and risk limiting the development of the company’s internal knowledge base, thereby threatening future R&D and creating a “vicious cycle,” where more acquisitions are necessary to keep growing.

With the pace of technological change and new market development around the world, R&D or innovation deals “are very necessary these days,” Chaudhuri says. “It’s really difficult for any company to stay on top of all changes in the competitive landscape, and it’s not necessary.”

There’s nothing wrong with pursuing innovation through acquisition, he continues, though he warns that companies can pursue bad deals. “You can’t really be desperate and try to do something and have that be a good bet every single time,” he says. “But if you do it as a supplement — use alliances and outsourcing and acquisitions — there’s nothing wrong with that, and I think that’s a good corporation innovation strategy.”

“Striking deals now is a useful way to lock in the historically low rates we are seeing.” –Emilie Feldman

Bahnsen adds that the companies that successfully use acquisitions for growth generally do so as only a small part of their overall strategy, pointing to companies like Johnson & Johnson, whose most recent deal, to buy Abbott Medical Optics for $4.83 billion, was announced in September.

Even with interest rates at historic lows, there is concern that companies on acquisition sprees are running up too much debt. “Companies are leveraging up significantly,” says Peterson.

Chaudhuri says one of the reasons for the increase in debt is that investors have a lot of money and few good options for it. “Hedge funds, VCs, private equity, they don’t know what to do with their funds,” he says, so they are willing to buy corporate bonds that are funding M&A. “There’s not a lot of opportunity right now.”

But while prior eras of rising debt were driven by leveraged buyouts and competition among private equity racing to grab high-flying names, he says this time, the debt has better fundamentals.

As evidence, he points to efforts by Twitter to sell itself at a huge valuation — rumors had its price tag ranging from $18 billion to $30 billion — without success. During the dotcom boom of the late 1990s, there were countless internet companies with plenty of eyeballs but no profits that were sold for high valuations. Today, the struggling microblogging site, despite its high visibility, hasn’t been able to strike a deal because buyers are more skeptical.

Bahnsen adds that debt levels are all relative. “It’s never about the absolute level of debt; it’s about the ratio of debt to earnings,” he maintains. “If companies are making $10 and borrowing $5, that’s more concerning than if they’re borrowing $50 and making $1,000.” He says that the debt-to-earnings ratio has increased, “but it is still nowhere near the leverage mania that we had prior to the financial crisis.”

Adds Bahnsen: “It’s not a red flag, but it is a yellow flag.”