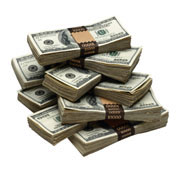 Apple is sitting on a mountain of cash — $98 billion, in fact. And on Monday, the company announced it had plans to begin buying back stock and paying a dividend to its shareholders, for a total payout of $15 billion a year.

According to an article in The Wall Street Journal, however, the move won’t put much of a dent in the tech giant’s balance sheet. Even after two years of payouts at that level, the company should still have $75 billion on its books, the Journal says. By comparison, another Journal article points out that among non-dividend paying companies, Google now ranks highest in terms of available cash — $45 billion — followed by Dell at $15 billion.

So while investors might be happy that Apple is sharing its wealth, the question arises: What else could the company do with all that money?

According to Wharton management professor David Hsu, the company’s cash reserves will probably come in handy down the road as competition in the tech industry intensifies. “Apple is clearly doing well now … [but] extending its winning streak into the next disruptive technology segment will likely require significant investment. Should critical innovations emerge from outside of Apple, the company should stand ready to try to acquire.” Apple has not been known to do large acquisitions under former CEO Steve Jobs, Hsu adds, but the company’s new CEO, Tim Cook, “has already begun to put his own imprint on the company.”

Other suggestions? Aside from funding in-house design, research & development and possible acquisitions, “Apple may wish to invest more of its resources in its reputation with regard to supplier relationships,” Hsu suggests. “While there have been conflicting reports in the press about the extent to which the company puts pressure on its Asian suppliers, I have not seen many positive reports.” In January, the company responded to accusations of ignoring worker abuses and other violations at its overseas suppliers by vowing to more aggressively pursue supply chain audits and issuing social responsibility reports. “The company has already taken some steps to improve,” Hsu notes, “but I would not be surprised to see more internal and external pressure in this domain.”