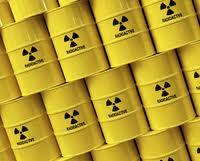 On April 11, one month after a massive tsunami set in motion equipment failures that severely damaged three reactors in a Fukushima, Japan, nuclear power plant, the owner of the plant, TEPCO (Tokyo Electric Power Company), announced that it had been forced to dump 11,500 metric tons (more than 2.6 million gallons) of somewhat radioactive water into the sea to make room in its storage tanks for water that is much more radioactive.

The incident highlighted an ongoing problem for the nuclear industry. Since the Fifties, industry cheerleaders have touted nuclear energy as a clean and safe alternative to conventional power generation. They talked about backup systems. They reassured people that there were physical reasons a nuclear reactor could never, ever explode like a bomb. But there was one area even the most vocal boosters tended to be a bit quiet about: how to dispose of the waste after the uranium fuel rods are spent.

The problem of waste disposal has stayed on nuclear developers’ to-do list for five decades. The technical difficulty of disposing of such “hot” material for as much as a million years, coupled with the political need for a perfect rather than a good solution, has stymied progress all over the world. In Japan, as in most of the rest of the world, nuclear waste is stored above ground, awaiting a more permanent solution.

But in many countries, pressure may be building now to resolve the question. The global need for more energy, particularly energy that doesn’t create more greenhouse gases, and the reminder of the Fukushima disaster about the potential dangers of a nuclear mishap, seem to be pointing a way toward a political reaction that will either speed adoption of nuclear power or consign it eventually to a decreasing role in energy production – an impressive technology that like the Concorde didn’t ultimately fit the needs of the market.

Editor’s note: Knowledge at Wharton collaborated with Paris Tech Review to produce a three-part series about the future of nuclear power in the wake of the Japan tragedy. This is part two – click here to read the rest of it. Click here to read part one. Part three will appear soon.

Back in the Game – Returning to Business After a Hiatus: Experiences and Recommendations for Women, Employers, and Universities