In the aftermath of two political earthquakes in 2016 — Brexit and the election of Donald Trump — what can be expected in the EU’s three big elections in 2017, in The Netherlands, France and Germany? For economic and historical reasons, the changes are unlikely to be so shocking, according to this opinion piece by Kalin Anev Janse (@kaanev), secretary general and also a member of the management board of the European Stability Mechanism (@esm_press), or ESM, the Eurozone’s lender of last resort. (This article reflects his personal opinion).

Western societies are shifting. Seismic changes, from the Brexit vote to the U.S. elections, challenged the status quo in 2016. Is this a global move? No, at least not for now. It is mainly confined to Europe and America. These highly successful societies are searching for a new narrative. Post-U.S. elections, all eyes are turning to Europe. What are the key events to watch in Europe in 2017?

If there is one thing to watch in the New Year, it must be the three big elections in The Netherlands, France and Germany. They represent 56% of the Eurozone economy. They are three of the six founding members of the European Union (EU), which decided to set aside differences after the Second World War in the ambitious belief that joining forces would make them stronger. Together with Belgium, Italy and Luxembourg they signed the Treaty of Rome, which created the European Economic Community (EEC) and a common customs union in 1957. This is exactly 60 years ago this year.

Was it successful? Absolutely yes, the collaboration of the Netherlands, Germany and France made them rich. Very rich indeed. Since 1960, these countries have experienced impressive growth in real GDP per capita. Large parts of these countries were destroyed during the war. They rebuilt themselves, strengthened their economies, and have been flourishing for six decades. Largely due to deeper cooperation, these changes have been remarkable and unprecedented. This deep collaboration was so lucrative that it made The Netherlands, France and Germany outperform the United Kingdom (U.K.) and the United States (U.S.) over a 60-year period (figure 1).

“The Netherlands, France and Germany outperformed the U.K. and the U.S. economically over a 60-year period.” 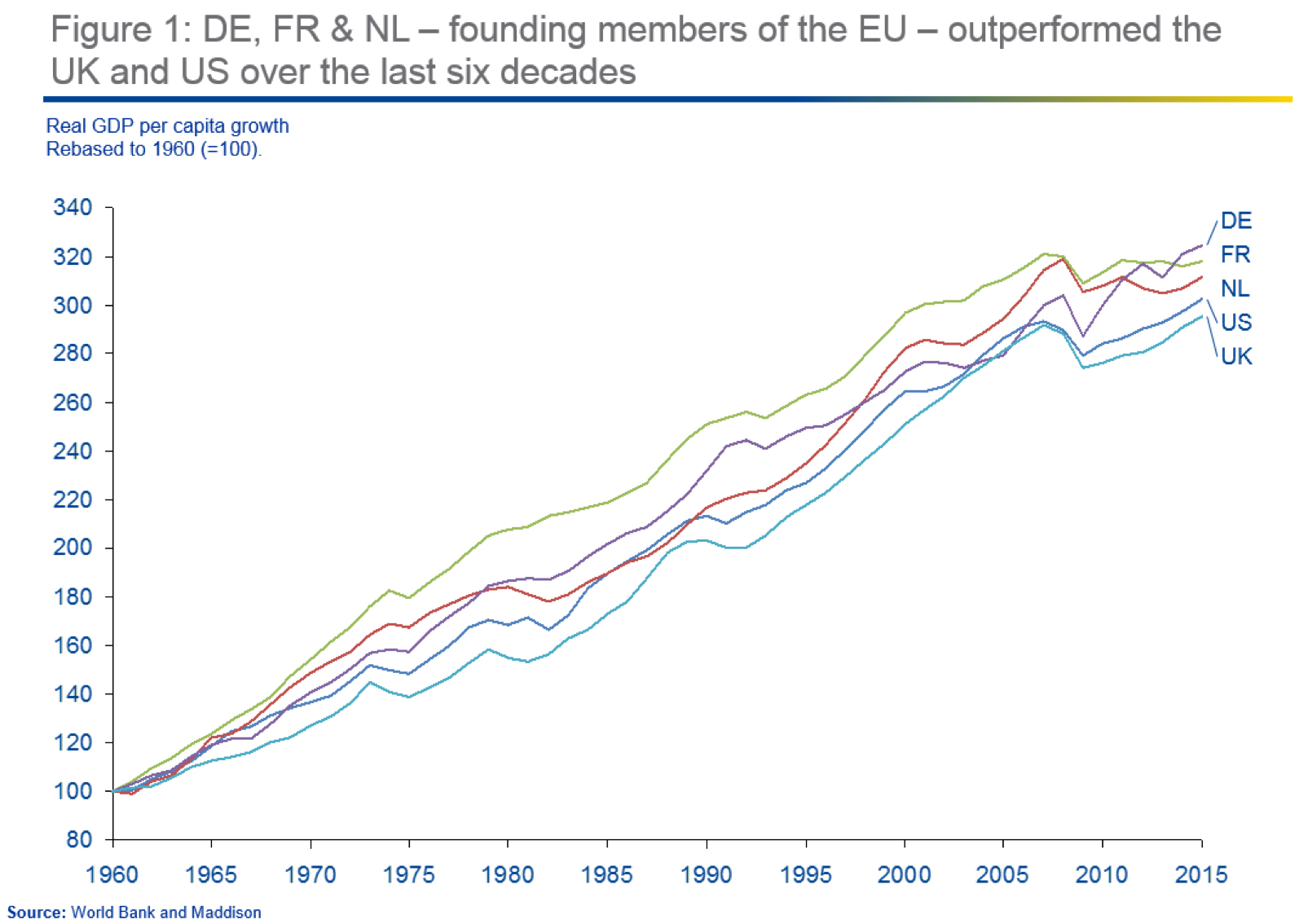 The Netherlands, France and Germany did more than that. They ensured that large parts of society benefit from this economic growth. The countries implemented policies that distributed wealth more fairly: affordable first-class education, social security to cover for rainy days and tax schemes that found the right balance between incentives to work harder for ambitious people while ensuring a decent income for the less fortunate. And the results are striking (figure 2). In the U.S., the poorest 40% of earners bring home just 16% of the national income while the richest 10% earn a whopping 29%. In The Netherlands, France and Germany, the numbers are much smoother (bottom 40% brings home 22%, top 10% around 23%). The U.K. is a bit in the middle, but trend-wise similar to the U.S.

This explains in large part why income inequality and missing out on economic growth were big topics in the U.S. elections and U.K. Brexit referendum. The European countries that will head to elections this year have done much better. The Netherlands, France and Germany have fairer and more equal income distribution than the U.S. and U.K. This is mainly due to the “European welfare model” — though long under fire, it might now appear to be just the right recipe to deal with the problems that globalization brings. 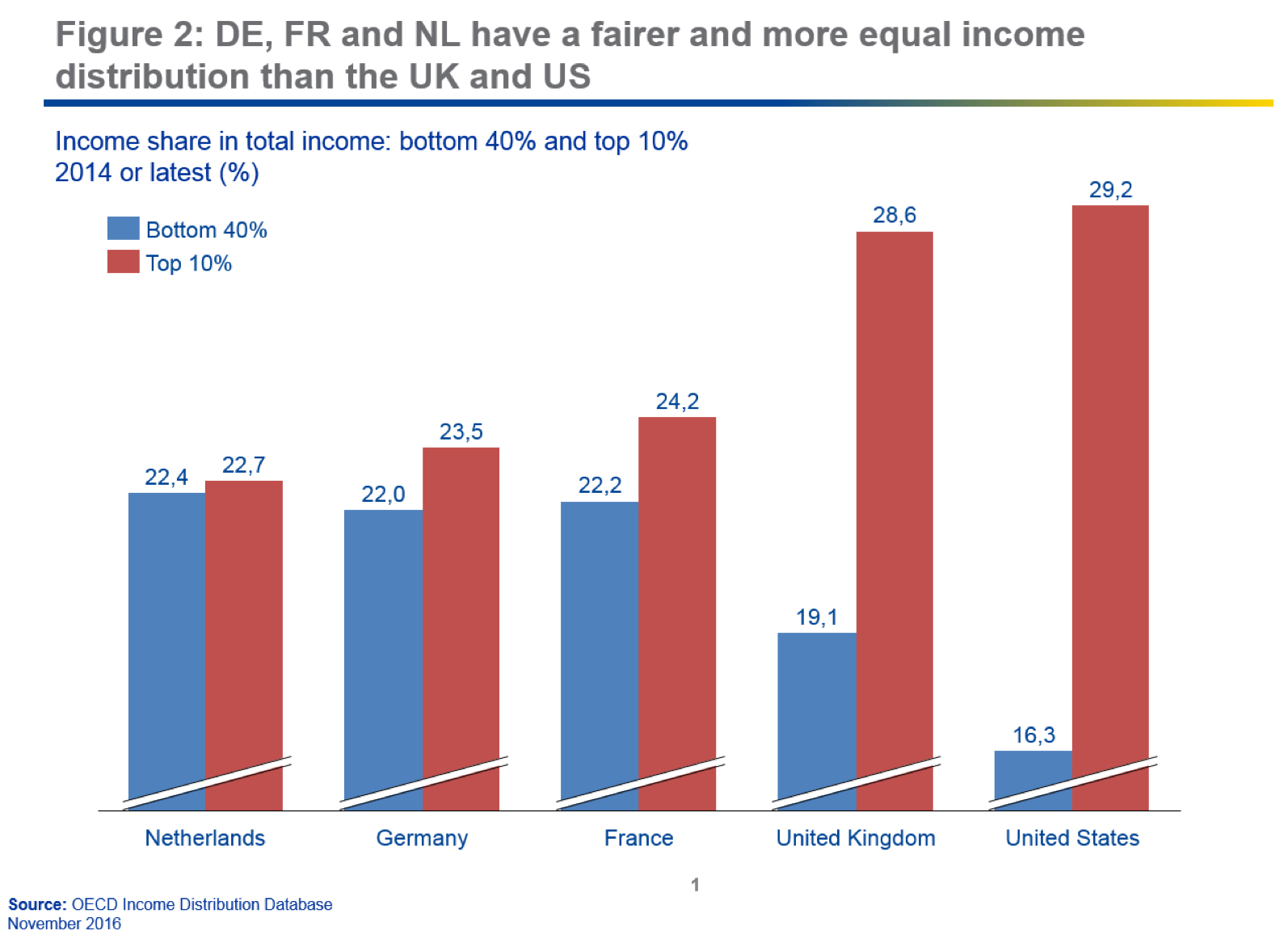 Europe’s Economy Is Back

The overall economic picture changed tremendously in Europe over the course of last year. With the exception of Greece, all European countries have returned to growth (figure 3). The EU (1.8%) and the Eurozone (1.7%) grew faster than the U.S. (1.6%) in 2016. The unwavering political support of key Eurozone countries, such as The Netherlands, France and Germany, allowed the economic union and the euro to survive the crisis successfully, despite many doomsayers. Europeans are starting to feel the effects of an improving economy and, therefore, concerns are shifting. 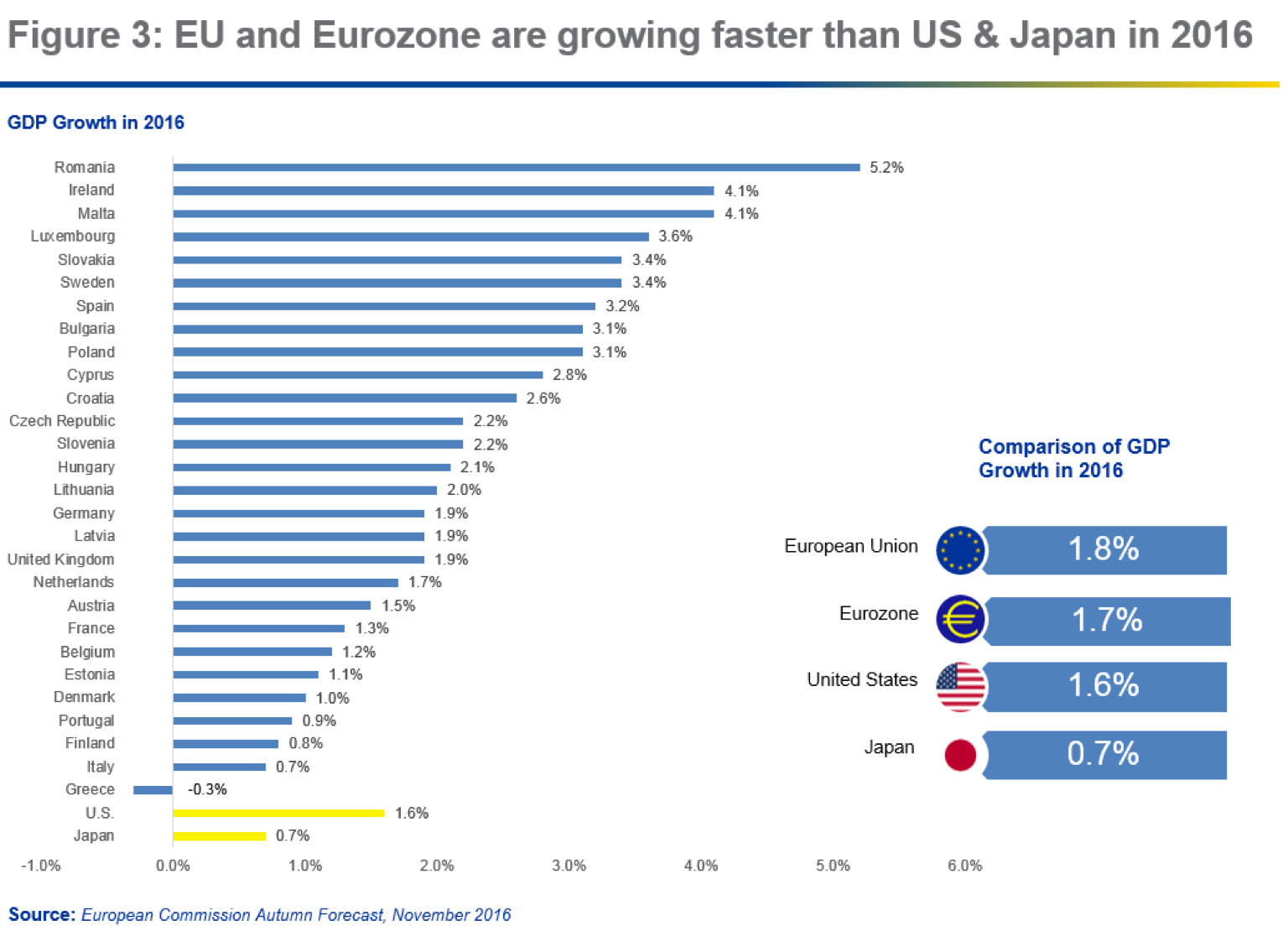 Before spring 2015, the number one concern in Europe was the economy. This has shifted rapidly and the top concerns today are immigration (48%) and terrorism (39%). This is what Europeans answered in the latest Eurobarometer, when asked what the two most important issues facing the EU and their own country are. The Dutch, French and Germans sound these concerns on both the European and the national level (figure 4). This is what keeps them awake at night. These are the topics that are closest to their heart.

In democracies, people point their leaders to the key topics want to be addressed. Rightfully so. This means that politicians and policy-makers must address these real concerns. By their very nature, immigration and terrorism are cross-border and need to be solved internationally. This is where European collaboration can show its benefits. Europe was able to curb the first wave of immigration over the course of 2015 and 2016. Immigration numbers went down dramatically. Terrorism is still a large concern; European collaboration and information exchange can reduce the threat.

The topics of immigration and terrorism narrowly, and safety and security broadly, bring back the essence of European collaboration. These were the core principles that started European cooperation 60 years ago. This is what people truly wanted. This has an emotional value. Fortunately, most people today have not known wars in Europe. Seventy years ago this was different. If you were a young European, you would have lost millions among your age group on battlefields. The military graves across Europe show the tangible remains of hundreds of thousands of young French, Germans, American, British and other soldiers.

“If something dramatic or unexpected happens, the founding members might gather again, as they did post-Brexit, and set the narrative for the coming years.”

The debate, as 2017 elections approach in the Netherlands, France and Germany, will again be around the core values of Europe. Of course, we should also stress the economic arguments: These three countries have shown better GDP growth per capita and more equitable income distribution than the United Kingdom and the United States. But as people are emotional creatures, safety and security is what matters to them most now. This is what Europe has successfully delivered for many years. And this is what is being challenged at the moment. The elections in the founding members will be about which leaders can deliver on those basic needs again — and explain this in a manner that is crystal clear and convincing. 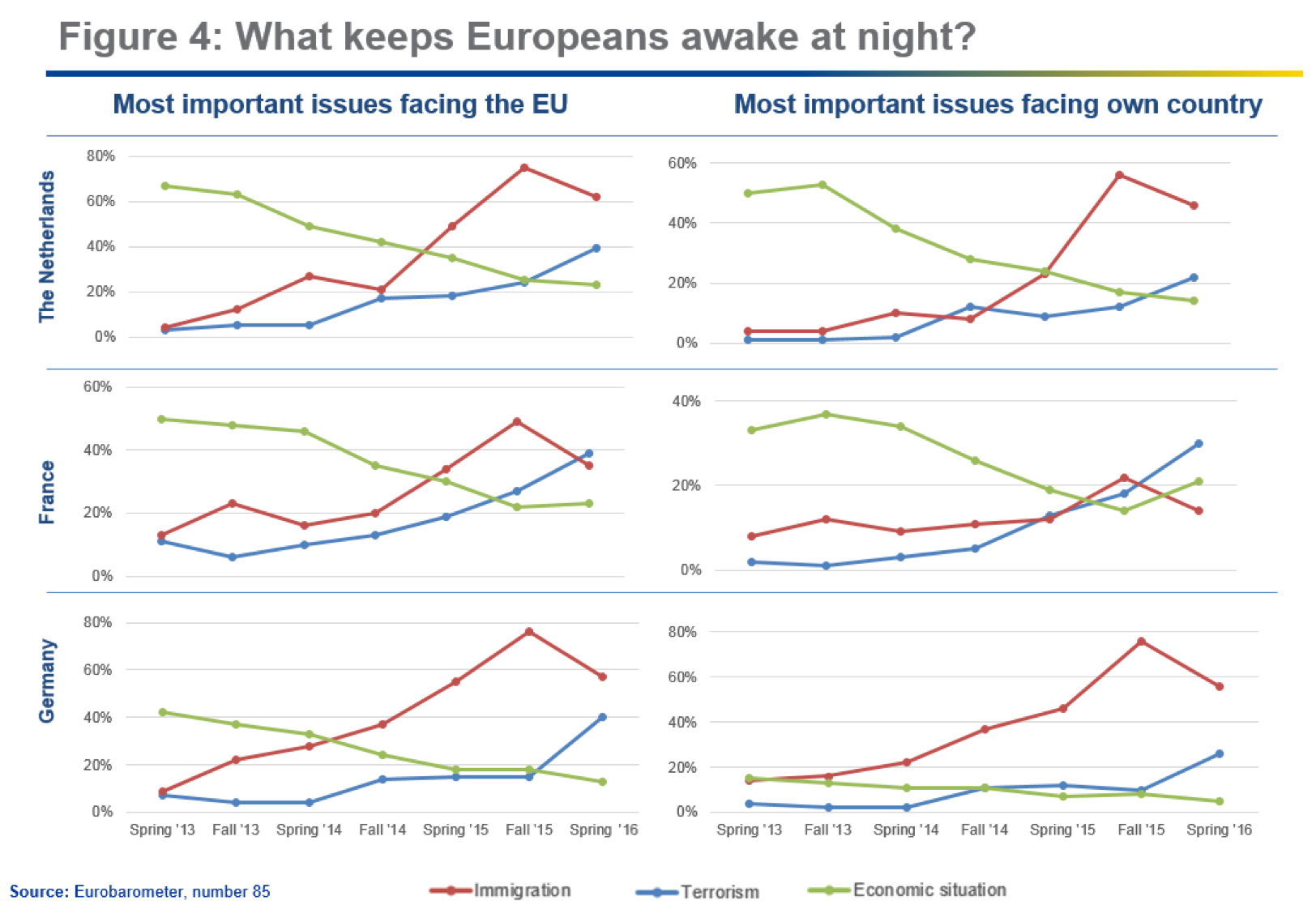 Other Topics to Watch

Obviously, there are many other topics that are relevant to watch in Europe this year: the aftermath of the Brexit vote, the finalization of the third Greek support package (the last remaining country under ESM or EFSF crisis support), U.S.-Russia-EU relations, EU-Turkey relations, European Central Bank monetary policy and developments in financial markets. Anti-globalism, anti-trade and Euroskepticism are potential headwinds as well.

All these issues will come together in the elections of the three founding members of Europe. The outcome will shape the direction of the debate. If something dramatic or unexpected happens, the founding members might gather again, as they did post-Brexit, and set the narrative for the coming years.

So what is my take on these key elections? Well, as they say: “Making predictions is very difficult — especially about the future!” Nevertheless, it is certain that this year will be a crucial year and these elections will define Europe’s future. I strongly believe in the power of democracy and the wisdom of people. We are the guardians of the European project which has brought peace and prosperity to many. Citizens will ask for changes, which we should implement. But we should safeguard some of our hard-won core values for the next generations: Young Europeans, who have never seen war, and have never been stopped at a European border.