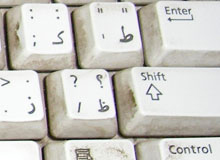 Esra’a Al Shafei is founder of CrowdVoice.org, a user-powered service that tracks voices of protest from around the world by crowdsourcing information. She is also the founder and Director of MideastYouth.com, an organization that aims to amplify diverse and progressive voices advocating for change throughout the Middle East and North Africa using digital media. She is also founder of mideastunes.com, a platform for underground musicians in the Middle East, and Ahwaa.org that leverages game mechanics to facilitate high-quality interactions.

Her work has earned her numerous humanitarian awards. She is a recipient of the Berkman Award from Harvard University’s Berkman Center for Internet and Society for "outstanding contributions to the internet and its impact on society," and is currently a Senior TED Fellow.

Based in Bahrain, Al Shafei speaks to Arabic Knowledge@Wharton about how keeping current with digital innovations has allowed her to advance her mission even in the face of official opposition and popular sentiment. The Internet allows people to overcome barriers in understanding and bypass filters, she says, which is why free speech online must be protected.

Arabic Knowledge@Wharton: Virgin CEO Richard Branson referenced you recently when he blogged about the importance of digital rights. Do you see them in danger?

Esra’a Al-Shafei: We have to protect the Internet in every way we can, because it’s the primary medium that we can express ourselves in without having to go through gatekeepers, either international or local ones. It’s the only way for us to truly spread the word. Much of what we’re talking about isn’t a new phenomenon; the difference is that the Internet allows us to discover these movements, and connect with the world about the details of these movements in a way that we weren’t able to do before. It allows for things like exposing and documenting abuses and genocides that we’d otherwise never even hear about.

Today few governments and people can get away with crimes or human rights violations without it being heavily documented and presented on the Internet. Even the U.S. government was trying to get YouTube to take down videos of police brutality during the Occupy protests. It’s not just a Middle Eastern thing; digital rights are truly global, and many governments are trying to clamp down on them because no one wants you to see the truth.

That’s what made me start CrowdVoice. I realized that we have all of this information, so how in the world are we meant to organize it? With CrowdVoice that’s what we’re doing. It’s curating content from all different locations; things that people have stopped hearing about just because it’s old news, but remain an ongoing struggle that people are fighting against. It’s important to compile, curate and spread this information or at least have it archived somewhere so that people know where to go to find more information on these subjects.

Arabic Knowledge@Wharton: What are some of your challenges you’ve faced?

Al-Shafei: The sad thing is that there’s so much propaganda online as well. Everyone is becoming tech savvy these days. The war is online as much as it is offline. Apart from censorship, we face ongoing hacking attempts. For example, kurdishrights.org is being hacked pretty much on a monthly basis. We have to work super hard to make sure that our servers don’t go down and our material is backed up. There are so many people trying to silence these voices; not just governments, but also people like ultra nationalists.

Arabic Knowledge@Wharton: Do you and your peers worry about your safety?

Al-Shafei: You don’t have to be a full-blown activist, all you have to do is whip out something like this and everyone tries to shush you up. That’s why most of the Twitter users are anonymous, they just have usernames but they don’t tell who they are or where they live for the sake of their security. When someone goes down, it’s like the entire family goes down, so you have to be super careful. Our website was also censored in Yemen for a couple of days and that was also a reaction due to the page about Yemen.

Arabic Knowledge@Wharton: How do you stay innovative?

Al-Shafei: We build things for the iPhone and Android. We’re building something huge for the iPad, and it’s going to be great, that’s what keeps me excited. I love thinking about where the technology is taking us and how we take our movements there. You can’t just sit around and tweet, share things on Facebook or blog. I truly believe that if you want to make a mark in society and be heard, you have to do things that are different. You have to make your path to be heard and visible. There are so many causes on CrowdVoice that people don’t really talk about. How can we use this platform to say, "Ok, here’s all the information you need to know, now you’re more empowered to go write about it." We gave them options to participate, share and distribute the information. If you find more ways to encourage people to write and do the things, they will do it.

We also built Mideast Tunes recently and that’s been extremely well received both locally and abroad. It’s a platform that serves as a discovery engine for underground musicians in the MENA region who use music as a tool for social change. It’s a fantastic project to work on as we’re always finding new and creative ways to amplify voices of dissent, and music is a really influential way of doing that.

Arabic Knowledge@Wharton: How do you stay current and relevant?

Al-Shafei: You have to obsess about the new technologies that are out there. My homepage is all tech blogs; it’s the first thing I see even before the news. I want to know the next gadget that is out, so we can figure out how can we make our services compatible? I want to reach out to entrepreneurs and see how can their service be of use to us specifically. I want to reach out to just these kinds of individuals that help shape the Internet and we want to make sure that to make sure that our causes are going to be there with them. There are a lot of entrepreneurs who only care about money and advertising and that’s fine. They’re here to make money, and sometimes it’s hard to get them to think of things beyond that.

My favorite example is the founder of WordPress, because he does care about freedom of speech and it shows. He loves open source and I think that’s really why he’s a donor to us as well. I’ve reached out to an animator and all I said was, "I have a story and I want your help to bring it to life visually. I have no money whatsoever to give you, but if you’re interested help me make this happen." He did it for free. This guy is a topnotch animator that does things for really big networks. He wrote back and he said, "I care about this cause. I care about your vision. I’d love to make it happen."

We do a lot of controversial things that not everyone is comfortable with. But I also know that it’s harder to get people to care about smaller issues, grassroots causes and minorities. If we were doing something about poverty or children, it’s easier to communicate and get people to relate to. But we’re dealing with these controversial topics and people say, "No, I don’t want to be associated with this. It’s too scary." Especially if you’re a businessman or an industry leader, it’s why corporations also stay away from these kinds of things.

That’s really our number one concern, is we want to raise it from people who aren’t scared talking about these things. Unfortunately, a lot of people just don’t prefer to be associated with these things because it’s easier to say, "Oh, I raise money to help kids, orphanages, or schools." Everyone can relate and sympathize with children without homes.

Arabic Knowledge@Wharton: How are you currently funding your sites?

Al-Shafei: One of the main funders to date is the Omidyar Network, which is a philanthropic investment firm founded by the founder of eBay, Pierre Omidyar. They’ve funded 200 projects, mostly focusing on government, transparency and media. They fund several high profile Internet applications and Wikipedia, we’re amongst the first Middle Eastern partners that they have.

Arabic Knowledge@Wharton: Are you doing this full-time?

Al-Shafei: I work on this full time because of the funding from the Omidyar Network. At first I was funding myself through consulting work. My partner and I used to develop websites together. We did design and development for other clients, and it helped me pay my bills while I did fundraising. Thankfully with Omidyar, I was able to make this my full-time job. It’s a part-time salary for a full-time job and I’m focusing around the team because I have several people on a part-time basis, no one’s full-time yet. We’re really just trying to fundraise more; we’re not a big team. I love working in small teams.

People ask, "What’s the secret of being prolific?" I say, limit the people that you have to deal with. If you do two or three people on a design and collaborate on a design and development it gets done fast. People always have this assumption that if you work with so many people, you’re going to get so many things done in different ways. It’s false and that’s the worst decision anyone can ever make. It’s why we were slow from the year 2006 and 2008. It’s why in that period, we didn’t get much funding or recognition, no international awareness about our work, nothing. Even though we were pushing out so many projects and doing a lot of work. Our bloggers were getting a lot of visibility locally but not internationally. That only came after we started really cutting down the people in the team. Even though they were all volunteers, they were all decision-makers and we said, no, we just want to pick the best three or four and then have them part-time.

Arabic Knowledge@Wharton: You receive money from patrons, are there ways you can bring money in through your sites?

Al-Shafei: With Mideast Tunes, when it comes to selling music, we couldn’t achieve it because we prefer that the songs are available for free and usually the bands have other ways to sell their music such as via exclusive deals with iTunes or CDbaby.com and such services. We thought a lot about how we can make this profitable, but we insist on making the music itself accessible and free because it’s music for social change and it makes no sense at all to charge people to listen to these inspirational tunes. At some point we may try to sell something like an app. For now, it’s free because we want to spread the word.

Once the site is big enough, and we have thousands of bands and it’s at the point where people would be willing to pay, we’d definitely be charging for apps, widgets, and playlists. It’s not going to provide quick millions, but it’s going to make a decent chunk to at least sustain parts of our organization. We’re also trying to find more ways to monetize our technology — such as selling the source code of some of our tools to other startups and organizations. They are top-notch tools that we spent years building, and people will end up saving a lot of money if they would just buy it from us and customize it on their own as opposed to replicating it. Some of our products are open source but we can still monetize the customization elements of it.