If the U.S. wants to be as influential a global player in the 21st century as it was in the 20th century, it will have to get Asia right—and the recent signs are not good, writes Geoffrey Garrett, dean of the Wharton School, in this opinion piece. (A version of this article originally appeared on LinkedIn).

Recent weeks have been a different kind of “America First” as we all tried to follow the Flynn-Comey-Russia-Trump-Mueller bouncing ball. But with the President’s recent trip to the Middle East and Europe, let me ask a serious question about U.S. foreign policy and American national interests: Did anything important happen in Asia before the “he-said-he-said” D.C. tsunami?

Half credit if you answered that North Korea launched a ballistic missile that fell (mercifully harmlessly) into the ocean 400 miles after takeoff. U.S. foreign policy is invariably driven by crises. So no surprise that North Korea’s man-child leader Kim Jong-un’s recurring attempts to draw attention to his country and himself with threats to destabilize Northeast Asia has been about the only Asian story on Washington’s radar.

Full credit if your answer to my pop quiz was that China celebrated its own version of the U.S.’s post-World War II Marshall Plan, using massive financial assistance as large-scale economic diplomacy to draw lots of countries closer to it. Bonus credit if you can explain why this initiative is called “One Belt, One Road (OBOR).”

The fact that there was scant attention to “One Belt, One Road” in the U.S. while it dominated headlines throughout Asia underscores my core worry about the U.S.’s Asia policy. Trump has been smart to back off the confrontational tone towards China maintained on the campaign trail. But nothing positive has filled the vacuum.

I do believe the U.S. is losing ground to China in Asia, and probably beyond Asia as well. Not because China is acquiring allies. But because it is using economic diplomacy to make more friends — or at least transactional acquaintances.

This matters because Asia’s already-high importance to the global economy and to geopolitics will only grow over the next few decades. If the U.S. wants to be as influential a global player in the 21st century as it was in the 20th century, it will have to get Asia right—and the recent signs are not good.

Consider the arc of waning U.S. involvement and waxing Chinese involvement in the last few years, underscored by the Belt and Road Summit.

First (in 2014), the U.S. badly misplayed a Chinese initiative — the Asian Infrastructure Investment Bank. Not only did the U.S. not join the Bank, it told all its friends not to join, too. In the end, only one of them listened — Japan. Today, AIIB is the Chinese alternative to the World Bank, with 52 member states and more than two dozen prospective members (both countries contributing funds and countries wanting to receive development assistance), and with less baggage and more money.

Second (between Hillary Clinton in 2016 and Donald Trump in 2017), the U.S. walked away from the Trans Pacific Partnership free trade agreement (TPP) championed by Barack Obama and designed to allow the U.S. to write “the rules of the road” on trade for the Asia-Pacific century. China was on the outside looking in, with the only potential path to membership requiring Chinese acceptance of rules made in America.

“Trump has been smart to back off the confrontational tone towards China maintained on the campaign trail. But nothing positive has filled the vacuum.”

Pulling out of TPP not only frustrated countries that had gone along with a deal that was less than optimal for them only because Obama wanted it so much, it also left the geo-economics playing field wide open to China.

Enter the Belt and Road Summit in Beijing, at which Chinese president Xi Jinping hosted 29 heads of state/government (10 from Asia, nine from Europe, five of China’s Eurasian neighbors and two each from Africa and Latin America), senior government officials from another 28 countries (including the U.S.), with lesser representatives from 40 more countries. Not the United Nations annual meeting in New York each September. But far from trivial given the scale of China’s ambitions. 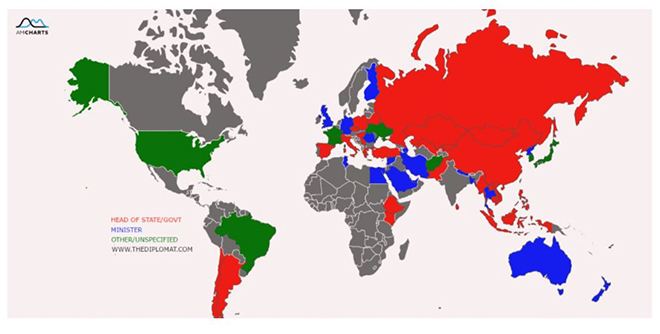 China’s president, Xi Jinping, no doubt got carried away in proclaiming “One Belt, One Road” is “the project of the century.” But after his “China is the defender of globalization” speech at Davos earlier this year, two things are clear. First, Xi wants to be the anti-Trump on the global stage. Second, he is the first Chinese leader to turn his back on Deng Xiaoping’s famous advice to his country: “Hide our capabilities and bide our time; never try to take the lead.”

Here’s how China’s new economic diplomacy is supposed to work:

This is a compelling proposition to most emerging market leaders because they know some combination of roads, railways, ports and airports are essential to realizing their full economic potential (just look at China).

“The U.S. should be proactively engaged in Asia, economically and politically as well as in terms of alliances and security.”

As the figure below shows, China’s big state-owned banks — now by far the largest in the world in terms of their asset bases — dominate China’s BRI (Belt and Road Initiative, the alternative acronym to One Belt, One Road) investments to date, with over a quarter of a trillion dollars of concessional loans since Xi announced the initiative in 2013. 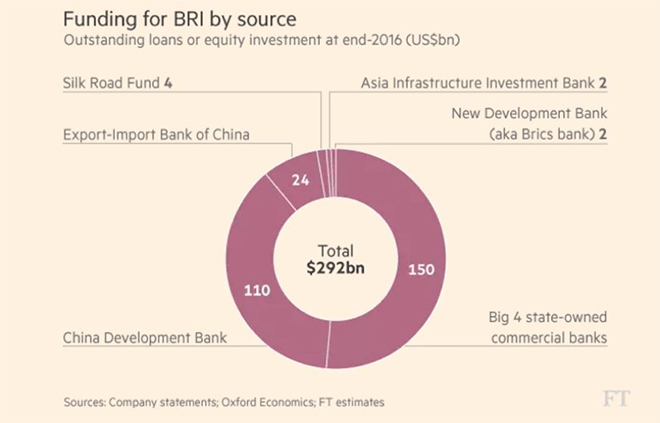 Looking over the next five years, the focus of OBOR/BRI will be on the biggest emerging markets — not only India and Indonesia in Asia, but countries as different as Iran, Nigeria and Russia, too, with $50 billion or more targeted at each country.

Step Two: Ease the path for recipients of BRI funding to use Chinese firms to do the infrastructure construction.

This is a win-win for China and the countries awarding the contracts and getting the money. On the one hand, China has proven it can build high-speed rail and airports faster and cheaper than anyone else. On the other hand, the frantic pace of infrastructure building within China has slowed markedly in the past couple of years. Lots of demand in emerging markets, lots of supply in China — with contracts worth $150 billion in the last two years. 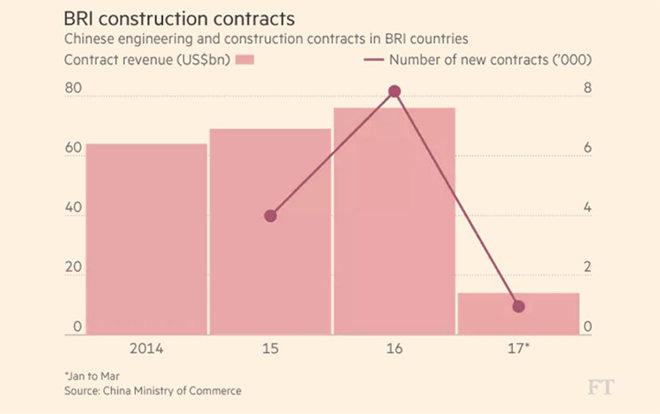 The best estimates are that the U.S. spent a little under $150 billion in today’s dollars to rebuild Western Europe after World War II. This Marshall Plan turned the region into one of stable democracy and open markets, with most of the countries also members of NATO. No doubt a great investment for the U.S.

Today, Xi is literally doubling China’s investment in the building of emerging markets in Asia, Africa and Eurasia. BRI is unlikely to be nearly as successful as the Marshall Plan. But there is no doubt China is aggressively playing the economic diplomacy game, and many emerging markets are playing along.

This doesn’t mean that the U.S. needs its own 21st century Marshall Plan. But it does mean the U.S. should be proactively engaged in Asia, economically and politically as well as in terms of alliances and security.

That is what Barack Obama’s “pivot” to Asia was supposed to be about. But it didn’t work. Now is the time for the Trump administration to focus on what its big Asia play will be. China certainly isn’t sitting on the sidelines waiting.