With tensions running high between China and the U.S., many fear an all-out trade war is in the making. But the likelihood of things boiling over is low, writes Wharton Dean Geoffrey Garrett in this opinion piece. Both countries have a lot to gain from their economic interdependence – and a lot to lose if they step up confrontation significantly. Instead, these tensions are more likely to continue playing out through “proxy wars” in Asia, as the two countries wrestle for influence.

With the temperature rising on U.S.-China relations, we should all hope that things don’t boil over. The downside risks of a trade war between the world’s two biggest economies are clear. I remain an optimist that the economic win-wins for both sides of the Sino-American relationship are so big that they keep the probability low of intense and protracted conflict (trade, investment, or military) between China and the U.S. — even with avowedly nationalist leaders like Donald Trump and Xi Jinping.

But I am worried about the U.S.-China “proxy wars” increasingly playing out in Asian countries. The grand strategy that has been so successful for Asia in recent decades — reinforce the benefits of the U.S. security umbrella while maximizing the economic benefits of China’s rise — remains the right playbook. But this balancing act is feeling ever more like a high-wire act as both China and the U.S. turn up the heat on countries in region.

The kind of U.S.-China jaw-jaw we have seen in the past few weeks over trade, intellectual property, the future of technology and innovation — and over the past couple of years regarding the South China Sea — is not unusual. In fact, there have been numerous similar escalations over the past few decades, and not one has become a flash point triggering major conflict. Instead, both China and the U.S. have consistently managed down, rather than inflamed, their tensions.

This pattern of outbursts that dissipate is not only understandable, it is also helpful for China-U.S. relations — letting off steam to reduce pressure (to keep the hot water metaphor going). Leaders on both sides understand that they each will need to send signals of being tough on the other country from time to time, mostly for domestic purposes. But they share an understanding that these outbursts are not intended to trigger escalations that would do lasting damage to the relationship between China and the U.S. Both countries benefit so much from their ever-greater economic interdependence, even if they don’t always like the terms of this interdependence.

So much for the history. Trump and Xi are clearly very different leaders from their predecessors. Everyone knows that Donald Trump wants to “make America great again.” In his foreboding Destined for War, Graham Allison summarizes Xi Jinping’s ambition as to “make China great again.” Both leaders’ focus very much begins at home, but their domestic aspirations have big international consequences.

Does this mean “this time will be different” when it comes to China-U.S. tensions? No … and yes.

No, in terms of bilateral China-U.S. relations. The two countries will inevitably continue to spar, but neither wants to inflict a body blow on the other because they would also be hurting themselves. China-U.S. is a positive sum, not a zero sum, relationship.

This is making increasingly difficult the China-U.S. balancing act Asia has so successfully executed in the past few decades, creating unprecedented prosperity and stability in the region. Asian countries should not, and will not, definitively “choose” between China and the U.S. But different parts of Asia will shade more in one direction than the other, because the American and Chinese strategies for the region are very different.

Since at least Barack Obama’s “pivot” to Asia in 2011, the U.S. approach to Asia has focused more on geopolitics than on geo-economics. Think increased U.S. military presence in Asia coupled with walking away from the Trans-Pacific Partnership.

China’s approach is the exact opposite. Very much aware of heightened sensitivities regarding its assertions of sovereignty over Taiwan, Tibet and islands in the South and East China Seas, China is increasingly emphasizing geo-economics over geopolitics. Think the Asian Infrastructure Investment Bank and the One Belt, One Road Initiative over naval operations in contested waters.

Since 2011, the U.S. has sold nearly $20B in military equipment to its closest allies and friends in Asia. Chinese armament sales have been both much smaller and concentrated in non-India South Asia. 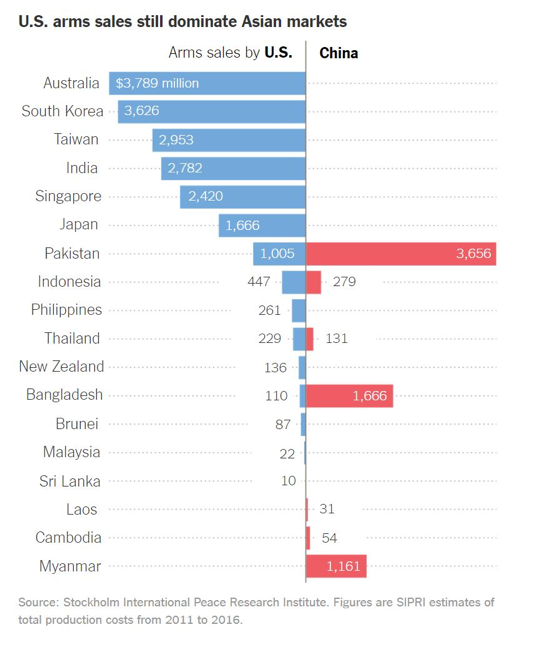 Over the same period, trade with China has increased relative to trade with the U.S. in the vast bulk of Asian countries — against a backdrop in which China was already the largest trading partner for most of these countries. 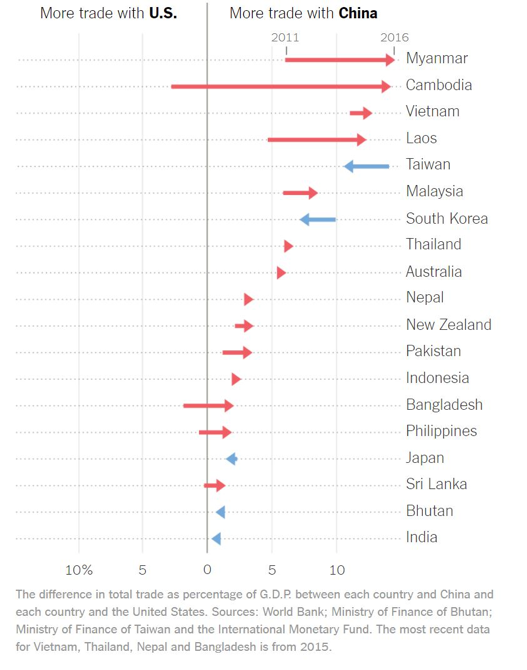 Add to this, the more than $1 trillion of preferential loans and construction projects China is planning to invest in its One Belt, One Road Initiative: to build much needed infrastructure in emerging economies in Asia and beyond; to create export opportunities for Chinese infrastructure firms as the pace of domestic projects inevitably slows; and above all, to increase China’s international influence in the process.

How will Asia react to this combination of American geopolitics and Chinese geo-economics? The New York Times recently tried to sum it by putting countries into three groups: “counteracting” China, “shifting toward China,” and “playing both sides.”

While it is overstated, there is real merit to this framework. Here are my friendly amendments to the Times’s Asia map:

What has changed is that increased China-U.S. tensions are leading both major powers to turn up the heat on Asia. Neither great power can afford large-scale confrontation with the other. They are too co-dependent. But they seem to be increasingly comfortable with proxy wars in Asia. Don’t expect a single united Asian response. Do expect China-U.S. balancing to become increasingly important, increasingly difficult, and increasingly divergent in Asia.