Turning the Page: Books for the Holidays and Beyond - Knowledge@Wharton

Turning the Page: Books for the Holidays and Beyond 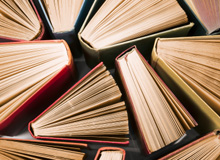 Our latest book report offers some opportunities for reflection as the year comes to a close and we begin to think about a new start in 2012. In part one of an interview, Jim Collins and Morten T. Hansen discuss Great by Choice, which is based on nine years of research about why some companies thrive in chaos while others do not. Malcolm Gladwell reflects on the “extraordinary wisdom” that has influenced the ideas in his bestselling books and why academic research should be read more widely.

Wharton professors Peter Fader and Richard A. Lambert talk about their new books, published by Wharton Digital Press as part of the Wharton Executive Education Essentials Series. Fader challenges businesses to identify their most valuable customers in order to ensure long-term growth and profitability, and Lambert explains why it is critical that managers use the financial data provided to them to make smarter business decisions. In an interview with Rob Markey, co-author with Fred Reichheld of The Ultimate Question 2.0, Fader goes from interview subject to interviewer to learn more about how companies can measure and increase customer loyalty.

Finally, an excerpt from Eric Ries’ Lean Startup will get you thinking about the benefits of applying lean manufacturing concepts to new businesses. We hope this special section brings you inspiration for the work at hand.

Leadership and Change
‘Great by Choice’: Jim Collins and Morten T. Hansen on Excelling in Uncertain Times
In a new book, Jim Collins and Morten Hansen suggest that even in the most tumultuous business conditions, we can choose to be great. Over a period of nine years, Collins, a bestselling author, and Hansen studied businesses that excelled and compared them to those that failed. As they note in an interview with Knowledge@Wharton and Wharton management professor Michael Useem, they learned that the most successful business leaders didn’t simply succeed: They delivered returns that were a minimum of 10 times the industry index over a 15-year period. In Great by Choice, Collins and Hansen share what these “10Xers” have to teach other business leaders.
http://knowledge.wharton.upenn.edu/index.cfm?fa=viewFeature&id=2880

Marketing
(Video with Transcript)
Peter Fader on Customer Centricity and Why It Matters
Starbucks and Apple stocks have been trading at record highs, but are these and other businesses doing everything they can to ensure growth over the long term? Peter Fader, Wharton marketing professor and co-director of The Wharton Customer Analytics Initiative, argues that too many companies are customer friendly, but not customer centric. In other words, they treat each customer the same, missing an opportunity to discover who their most valuable customers are. In his new book, Customer Centricity, part of the Wharton Executive Education Essentials Series, Fader describes what customer centricity is, what it isn’t and why it matters.
http://knowledge.wharton.upenn.edu/index.cfm?fa=viewFeature&id=2875

Human Resources
(Podcast with Transcript)
A Conversation with Outlier Malcolm Gladwell
While millions of people have read Malcolm Gladwell’s books, his ideas have had particular resonance with today’s business leaders. Wharton management professor Peter Cappelli and Gladwell were just named to HR Magazine‘s Top 20 Most Influential International Thinkers of 2011.Cappelli spoke with Gladwell by phone about why Gladwell is an “academic groupie,” the inconvenient truths that can spring from scholarly research, and how important decisions — like going to war or dealing with today’s economy — might be dealt with differently if we were to draw on the “extraordinary wisdom” of universities.
http://knowledge.wharton.upenn.edu/index.cfm?fa=viewFeature&id=2877

Finance and Investment
(Video with Transcript)
‘Finance & Accounting’ for the Rest of Us: A Conversation with Richard A. Lambert
Many managers are not comfortable reviewing the financial data that finance and accounting staffs provide them. Yet according to Wharton accounting professor Richard A. Lambert, financial statements reveal information that managers cannot afford to ignore because of what they show about a company’s opportunities and risks. In his new book in the Wharton Executive Education Essentials Series, Lambert demystifies financial statements and shows managers how to use the data to create and refine strategy and make better long-term business decisions.
http://knowledge.wharton.upenn.edu/index.cfm?fa=viewFeature&id=2876

Marketing
(Video with Transcript)
‘The Ultimate Question’: Would Your Customers Recommend You?
Fred Reichheld and Rob Markey’s The Ultimate Question 2.0 is a follow-up to the bestselling book that first helped businesses understand their Net Promoter Score. One question — would you recommend us to a friend? — offered businesses a vital metric that has since been adopted widely by organizations, including GE. Wharton marketing professor Peter Fader spoke with Markey about what NPS is, how companies can increase the number of people who promote them and why it is now a system and not just a score.
http://knowledge.wharton.upenn.edu/index.cfm?fa=viewFeature&id=2878

Innovation and Entrepreneurship
Eric Ries on ‘The Lean Startup’
It’s a reality that haunts every entrepreneur and would-be entrepreneur: Most startups fail. Eric Ries knows firsthand. He has been there. When he cofounded software company IMVU, he and his team tried a different approach by rapidly creating and releasing their product before it was perfected, only to continuously update, revise and re-release it, based in part on customer feedback. It worked. In an excerpt from his new book, The Lean Startup, Ries explains what led him to adapt lean manufacturing to develop this new method for managing a startup.
http://knowledge.wharton.upenn.edu/index.cfm?fa=viewFeature&id=2879

"Turning the Page: Books for the Holidays and Beyond." Knowledge@Wharton. The Wharton School, University of Pennsylvania, 22 November, 2011. Web. 24 October, 2021 <https://knowledge.wharton.upenn.edu/article/turning-the-page-books-for-the-holidays-and-beyond/>

Turning the Page: Books for the Holidays and Beyond. Knowledge@Wharton (2011, November 22). Retrieved from https://knowledge.wharton.upenn.edu/article/turning-the-page-books-for-the-holidays-and-beyond/

"Turning the Page: Books for the Holidays and Beyond" Knowledge@Wharton, November 22, 2011,
accessed October 24, 2021. https://knowledge.wharton.upenn.edu/article/turning-the-page-books-for-the-holidays-and-beyond/