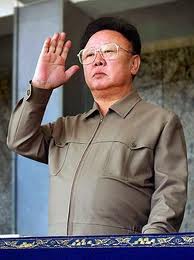 The death this weekend of North Korea’s Kim Jong-il, who ruled the country with an iron fist since his father’s death in 1994, had immediate repercussions throughout Asia and beyond.

The New York Times reports that South Korea — which has been at war with North Korea since the early 1950s — immediately put its military on alert, “boosting surveillance along the 155-mile border between the two countries, one of the world’s most heavily armed frontiers.” The tension between the two countries escalated during the past several years after North Korea demonstrated nuclear capability.

According to The Wall Street Journal, Asian stock markets took a dive in response to the news, “with South Korea’s stock market and the won tumbling to multiweek lows…. With markets already reeling from the European debt crisis and global growth concerns, Kim’s death has added a dangerous layer of instability to the Korean peninsula,” the Journal noted, adding that “many Asian neighbors [are] uneasy about the leadership transition phase in one of the world’s most reclusive regimes.”

That unease was further heightened by the announcement that Kim’s son, Kim Jong-un, has been named the country’s new leader, despite his youth (he is in his twenties), lack of experience and isolation from other governments.

Wharton faculty echoed the anxiety expressed in news reports. “Missiles have already been fired in the Sea of Japan” by North Korea, says Wharton management professor Witold Henisz. “This gesture demonstrates the internal uncertainty over succession, with Kim Jong-un or others trying to demonstrate their loyalty to the military or, perhaps, the military trying to demonstrate its independence. No one knows very much about the new potential ‘great successor.’ He will have to consolidate his power internally after having been raised in a two-generation cocoon [removed] from reality.”

The next days and weeks “are fraught with hazards such as Asia has not seen in years,” Henisz added. “Is China ready to step up and assume a position of international political authority? How will Japan, South Korea and others respond to provocations? Making the situation even worse, Europe is focused internally on the need to avoid the break-up of the euro, and the U.S. is increasingly turning inward as its election campaign heats up. In these circumstances, North Korea will have to act out even more to gain the international attention that it so craves. These are dangerous days.”

Wharton management professor Mauro Guillen points out that “leadership transitions in North Korea are a big deal because this is only the second one in half a century. The key issue is whether the youngest son has the support of the army or not, or whether the generals will use him as a puppet. His father alienated everyone, including China and the U.S., with his nuclear policy.”

Along with the country’s isolation is the fact that the North Korean people “are starving and are politically repressed,” Guillen adds. “Korean unification is still far away, and one can only hope that when it comes, it does not destabilize South Korea. Just think about how hard it was for West Germany to absorb East Germany. North Korea is much poorer and larger, and South Korea is not as resourceful as West Germany was. I think [U.S. President] Obama should go to the Demilitarized Zone separating the two Koreas and deliver a Reagan-style speech to [Chinese] President Hu, demanding that he ‘ cut off this barbed wire.’ China must seize the opportunity to put an end to this disaster.”

According to Howard Pack, Wharton professor of business and public policy, the death of Kim Jong-Il has been widely anticipated following rumors that he suffered from pancreatic cancer. Meanwhile, the succession issue “is very unclear – he favored his third son, but it is not [apparent] that [this son] is acceptable to the military. North Korea’s economy is very weak. While precise estimates of income per capita cannot be calculated, stories from emigrants both in China and in South Korea suggest a very low per capita income. [Yet] the country’s military capacity, especially in rocketry and atomic knowledge, is more than capable and has also been the only major source of foreign exchange.”

Pack adds that the “South Korean government has intensively explored the possibilities of an implosion of the North Korean economy and alternative policies to deal with it. South Korea is much larger, and its per capita income is probably 15 times greater. However, the government is well aware of the enormous costs to West Germany of absorbing East Germany. Except for the unlikely scenario that the new government would launch a war against the South, the death of Kim Jong-il has no obvious short-term implications for financial markets given its absence of exports, imports and financial interaction with the rest of the world.”