Immigration and the relationship between the U.S. and the rest of the world tend to be inward-looking issues for many Americans. But do U.S. citizens generally need to be more outward looking? “As the world becomes more multi-polar, as the U.S. becomes less globally dominant, the country will have to balance its comfort and confidence at ‘home’ with a greater understanding and appreciation of ‘the world,’” writes Wharton Dean Geoffrey Garrett in this opinion piece.

It was an honor and a personal privilege for me to welcome hundreds of new “international” freshmen (and their families) from more than 70 countries to the University of Pennsylvania earlier this month. Meeting students from other countries who have just arrived in America for higher education is always poignant for me because it has been the story of my adult life, a story I could never have written in advance.

Speaking to the freshmen I made three points, each of which have been a profound part of my identify — personally and professionally — over the 35 years since I first arrived in Durham, North Carolina, to begin my PhD in the Duke political science department.

1.    Coming to America changed my life in ways I literally could never have imagined.

I left Australia for America with two heavy suitcases and no real expectations or aspirations. I had a generous scholarship that would allow me to spend three or more years in America to get a master’s degree, and then I hoped, a PhD as well. My default — in fact, the only — path I envisaged was to get the degrees and then head back to my hometown of Canberra for the upper middle-class comfort of lifetime employment as a civil (“public”) servant in the Australian government, as my father did his whole working life and as my brother and sister do to this day.

But then I fell in love with research-based academics in one of America’s great universities. I not only loved it but I also got good at it quickly. This was, no doubt, in large measure because I was lucky to pair up with an advisor whose smarts, infectious enthusiasm for the academic life, and sheer zest for life was beyond contagious. Peter Lange (who went on to serve as Provost of Duke for 15 years) was more than my dissertation advisor. He was my co-author for over a decade and is my friend for life. To this day, I still talk with Peter whenever I have a big decision to make.

“Of all people who live in countries other where they were born, one in five lives in America.”

When I think about the transformation that “falling in (academic) love” had on my life, I often think back to my first academic job, not in America but the dreaming spires of Oxford, England. Like most good student athletes in Australia back then, I dreamed of getting a Rhodes Scholarship (today, it might be an NCAA scholarship). But I just wasn’t good enough. I went to the U.S. instead, in what for me at the time was a consolation prize.

Fast forward four short years after my arrival in North Carolina and I was teaching the Rhodes Scholars — as a young fellow of a very old and distinguished Oxford college, living on a cobblestone lane with real gas lamps for lighting where the original Brideshead Revisited BBC TV series was shot.

That was the start of my career, and it just could never have happened if I had not left Australia, gone to Duke, met and been taught and mentored by Peter, and discovered my passion for academic research and the academic life. I then went from Oxford back to the U.S., to Stanford, and I was fully launched.

My professional life has literally been one I could never have imagined. It is hard for me to express in words just how mind expanding and life changing this transformation was. It is, for me, the un-thinkably wonderful professional life that America made possible — along with my American family, the other blessed joy of my life.

2.    The immigration-innovation nexus is the secret sauce of the American economy.

Mine is only one of the countless stories of people coming to America from all over the world seeking education, opportunity, and a better life. I have benefited immensely, and I hope I have made a contribution to America, too. But I am far from alone.

As dean of the Wharton School, I spend time with the Indian deans of the business schools at Chicago and Harvard. I have gotten to know wonderful Wharton alums from Australia and India who are the CEOs of Kellogg (John Bryant) and Google (Sundar Pichai). These star “hyphen-Americans” epitomize the potential found in each immigrant family.

In the academic pantheon, Nobel Laureates are first among equals. And according to the Wall Street Journal, 31 of the 78 (40%) Nobel winners working in America were born outside the U.S. Eighteen percent of all scientists and engineers in America are immigrants — higher than the population at large, but less than for Nobels. The higher you go up the skill and achievement ladder in America, the more prominent immigrants become.

“Thirty-one of the 78 (40%) Nobel winners working in America were born outside the U.S.”

Talented people very often come to America because of its world-leading universities. Ambitious people stay because of the opportunities. They then make big contributions to America. For 150 years and more, the U.S. has been a magnet for people like these.

I think this immigration-innovation nexus is the secret sauce of the American economy. It is why I remain bullish about the enduring power and dynamism of America in the 21st century. It is why I am passionate both about the importance of immigration to America and about the globalization of the student body as the next evolution of American universities.

America as whole, not just its universities, really is a land of immigrants. Consider the numbers (I am relying here on the United Nations’ monitoring of people flows around the world, with all the data for the latest available year, 2015).

The norm in demographic research is to talk about the foreign-born population as a percentage of the total population. According to the United Nations, in 2015 that number for the U.S. was 47 million, or 14% of the total American population — high, but not nearly as high as the foreign born percentage in my native Australia, for example. This does not include the more than 10 million people living in America without proper documentation.

But to capture the notion of America as a global people magnet, you need to express the migration numbers differently.

That is five times as many immigrants as you would expect given the U.S.’s share of world population (a bit under 4%). Germany is the next largest migrant destination for global migrants. It has 12 million immigrants, only one-quarter of those who have come to America. China’s population is close to four times as large as America’s. It has just under one million immigrants.

The graph below tracks the top global 20 destinations for migrants in the world. The U.S. has been uninterrupted and unambiguously top since the UN started collecting the data. People worry that the U.S. is in danger of losing its no. 1 status in lots of categories. There is little chance the U.S. will soon lose its top position as a destination for immigrants — the high level of noise around immigration policy today notwithstanding — because the desire of so many people from all around the world to come to America remains so strong. 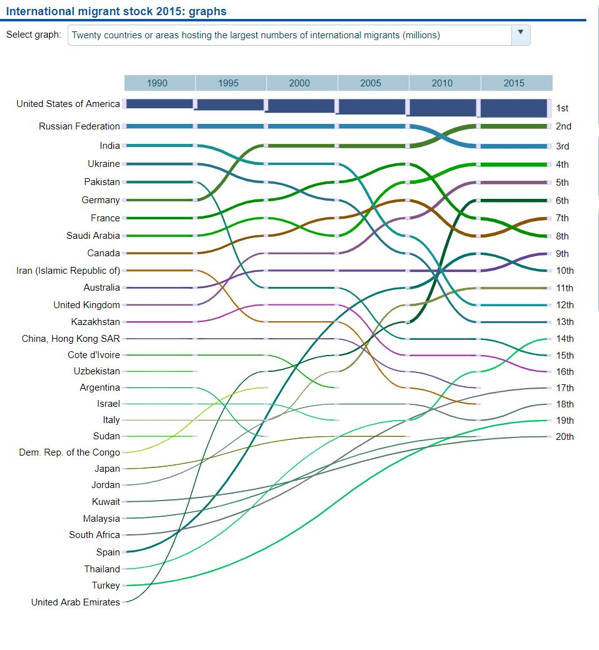 3.    The world has long come to America; it is now time for America to go to the world.

The U.S. is a nation of immigrants; but it is not a nation of emigrants. Forty-seven million foreigners now live in the U.S. Only three million people born in America live outside the country. Far from its no. 1 position in immigration, the U.S. languishes in 20th position in outbound migration. In other big immigration destinations, like Russia and the U.K., inbound flows of people are balanced by lots of the native born leaving the country. Not so the U.S.

For many Americans, this dominance of inbound migration (immigration) over outbound migration (emigration) probably seems a great and natural place to be. Life is so good that not only do people from all over the world come here, but also Americans rarely choose to leave their homeland. Certainly, there is more than an element of truth in this.

But even if the imbalance in American migration is understandable, it has come at a price. The U.S. is a more parochial country than is in its interests in the global 21st century. Only about one-third of Americans have a passport. Less than one in a hundred are proficient in another language they learned in an American classroom. When Americans travel, they tend to expect that things will be like they are at home. 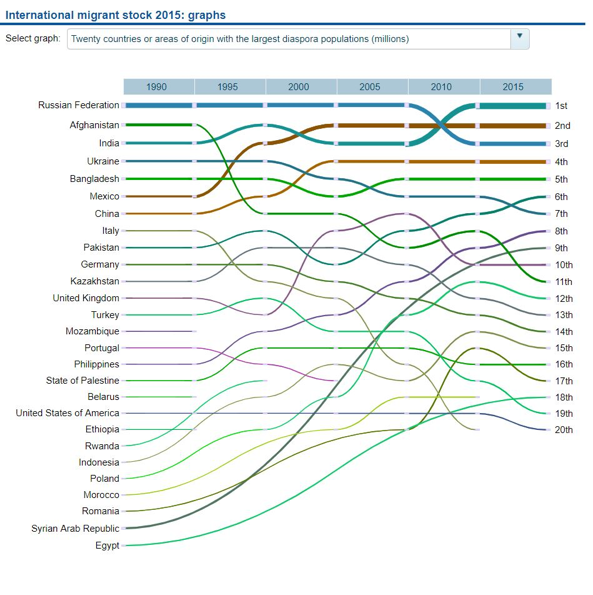 Beyond somewhat outdated stereotypes of ugly American tourists, there is a persistent feeling around the world that people in other countries know far more about the U.S. than Americans know about their countries. My sense is that this is often true, again, understandably: The U.S. has been the world’s most important country, on most dimensions, for over a century.

This kind of parochialism just doesn’t work for countries far smaller and less powerful than the U.S., like my native Australia. But I don’t think it works anymore for America, either.

“There is a persistent feeling around the world that people in other countries know far more about the U.S. than Americans know about their countries.”

As the world becomes more multi-polar, as the U.S. becomes less globally dominant, the country will have to balance its comfort and confidence at “home” with a greater understanding and appreciation of “the world.” Since at least 1850, the world has come to America. In the 21st century, America will have to go more to the world.

That is why in addition to celebrating international students on campus, I also am passionate about finding meaningful opportunities for our (American) students to spend time outside the U.S. I have spent my entire adult life studying global affairs. But no matter how much research I have done in books (and I have done a lot over the decades), most of the really important learning I have done about the world has happened when I have spent time in other countries, talking and working with the people (invariably across big linguistic, historical and cultural divides).

“Global citizen” is often derided as an idealistic cliché cherished by a small cosmopolitan elite. But for me, guilty as charged. I was born and raised in Australia, but I really grew up in America. I am a proud citizen of both countries and have visited over 50 others. I will always work to help give other people the kinds of life changing international experiences that I have — from supporting immigration to developing international study opportunities.

Going global is great for individuals. But it is also great for the world. And in this, America is first among equals.

This article originally appeared on LinkedIn.