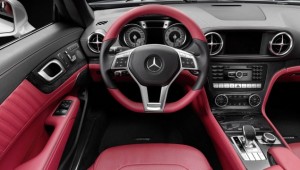 Is it legal to Facebook while you drive? That might soon be a relevant question if the automakers that showed up to the Consumer Electronics Show (CES) taking place today in Las Vegas have their say.

Auto manufacturers including Mercedes Benz USA, which is making its first ever appearance at the CES, and Ford, which is showcasing 20 models, are taking up an increasing amount of floor space in order to draw attention to their latest high-tech innovations. According to Smithsonian.com, “CES is turning into a mini-auto show.”

As Smithsonian.com notes, the CES has, over the years, given consumers their first glimpses of electronic-gadget hits like camcorders, DVRs and high-definition televisions. But anyone surprised by the presence of cars, or even technologically advanced refrigerators, at this year’s show probably shouldn’t be. “The definition of ‘consumer electronics’ is expanding,” says Kendall Whitehouse, director of new media at Wharton. “It no longer includes just consumer-focused software on computers and mobile devices. Many other products — from televisions to automobiles — are offering ‘smart’ functionality by integrating increasingly sophisticated computing technology. Some of the recent work in ‘natural’ user interfaces — from Microsoft’s Xbox Kinect to Apple’s Siri — opens up the possibility of new ways of interacting with a wide range of more conventional products and services.”

Mercedes Benz, for example, is introducing its mbrace2 system — “the next generation of telematics innovation that gives drivers top-of-the-line features related to safety, infotainment, personal assistance and vehicle care,” according to the company. The system is smartphone compatible and essentially creates a vehicle that is Internet connected, enabling drivers to search Google, ask for directions, perform engine diagnostics and, yes, access Facebook.

“Cars are getting increasingly computerized, no doubt, [with] up to 70 or so computerized systems at work at all times,” says Wharton management professor Lawrence G. Hrebiniak. “Cars park themselves, stop themselves, regulate temperature, control braking and car sway, find pizzerias in obscure neighborhoods, connect to the Internet, etc. High-tech consumers love the high-tech gadgets and services, so car companies must be tech-forward and advertise their wares on TV and in consumer electronics shows to increase their geek appeal.”

However, there is a downside to the technology boom, he notes. “Cars are getting more complex to understand and repair — no more simple adjustments to a carburetor screw by mechanics but, rather, repairs of Xs and Os by computer technicians.” And too much complexity can create other problems. “I know a person whose car engine would shut down for no reason, making driving on a busy highway a bit scary. It took many hours of costly computer analysis to learn why some chip was sending bad information to the fuel pump.”

These and other stories make Steven King’s concept behind the novel Christine — about a possessed automobile — “seem not so far-fetched after all,” Hrebiniak says. There is also a “looming” potential for cyber attacks, he adds, “as evil doers negate brakes, compromise steering, stall cars they wish to loot and otherwise infiltrate cars’ computers for their own ends. Homeland Security says that this is indeed a scary possibility.”

In that context, a Facebook status update accomplished while sitting at a traffic light seems fairly harmless. Hrebiniak jokes: “Does anyone know of an old four-barrel carburetor I might buy for a very old Porsche or Chevy?”