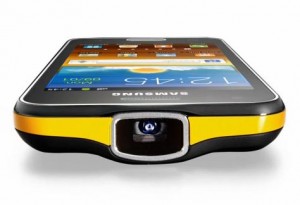 Do you ever wish your cell phone was waterproof? Or that you could use it to project videos and images on a wall? If cell phone manufacturers are right — and they are banking on it — then yes, you do.

At the recent World Mobile Congress in Barcelona — the world’s biggest annual mobile trade show — Fujitsu introduced its new waterproof phone, while Samsung launched the Galaxy Beam, which has a built-in projector that can show 50-inch-wide videos on a blank surface. Two manufacturers in particular made headlines with their latest innovations: Nokia showed a phone that incorporates a 41 megapixel camera — which places it on a par with vastly more expensive cameras — and Chinese cell phone maker Huawei displayed what it says is the world’s fastest phone — the Ascend D — which incorporates twice the processing power of current devices.

While there was an abundance of hype surrounding the new bells and whistles, the question remains: Will consumers bite?

Some cell phone technology and application breakthroughs “make sense,” according to Wharton operations and information management professor Eric Clemons. “A voice-activated assistant is a good thing while driving,” he notes, referring to Apple’s newest technological addition on its iPhone 4S. “Let’s hope ‘Siri’ gets good enough to work properly.”

Wharton director of new media Kendall Whitehouse says that Nokia’s camera “strikes me as a valuable feature for a particular segment of the market,” since many people depend on the use of their phones as cameras instead of carrying both devices. But on the whole, the latest gadgets and applications on display at the World Mobile Congress seem to represent “a fight to control the high-end of the market, which tends to exert the greatest influence over the app development ecosystem,” he notes. Early adopters may be most interested in the kinds of innovations that come out of such events, because these consumers “are reluctant to purchase a phone that doesn’t incorporate the latest technologies” — regardless of whether they intend to make use of them.

According to Whitehouse, one truly useful innovation would be for cell phone manufacturers to figure out how to extend battery life. After all, video projectors, faster processors and other technology “advances” all take a toll on batteries, which already often need charging at least once a day.

And what functions would Clemons not want to do without on his own phone? “Skype and the alarm clock,” he says. “But then, I always take my iPad along for everything else.”