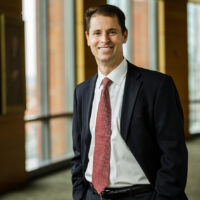 The federal government borrows money by selling bonds. Investors then must choose between safe government bonds and the higher yields of riskier alternatives like corporate bonds.

All that is clear, even to those with only a basic understanding of the financial markets. But sometimes the government sells a lot of bonds, other times fewer. How does the ever-changing level of government issuance affect corporate policies on the critical issues of financing and investment, such as whether to raise money through bond sales or new stock issues? The picture has long been murky.

“The upshot is there is a downside to government financing,” he continues, explaining that more bond sales by the government make it harder for corporations to borrow.

Roberts and two colleagues, John R. Graham of Duke University’s Fuqua School of Business and Mark T. Leary of the Olin School of Business at Washington University, have probed the issue with a century’s worth of corporate data, describing their findings in their paper “How Does Government Borrowing Affect Corporate Financing and Investment?”

The research shows how the ebb and flow of government debt issuance ripples through the markets, changing the prices of other types of assets and causing investors to raise or lower their portfolio allocations to alternatives like corporate bonds.

“In concert, our results suggest that large, financially healthy corporations act as liquidity providers by supplying relatively safe securities to investors when alternatives are in short supply, and that this financial strategy influences firms’ capital structures and investment policies,” Roberts, Graham and Leary write.

“We’re not saying that government debt is bad, period. But rather, government debt does crowd out corporate debt in investors’ portfolios, which has a negative effect on firms’ abilities to finance their investment.”

“It’s a simple and intuitive idea,” Roberts says, explaining that “when there is more government debt, there is more competition for investors’ money — there is less demand by investors for corporate debt…. So it becomes harder or corporations to issue debt.”

The relationship between prices and yields of government and corporate debt has long been clear. But how this dance affects corporate financial decisions has received little attention, Roberts says.

“We’re not saying that government debt is bad, period,” Roberts notes. “But rather, government debt does crowd out corporate debt in investors’ portfolios, which has a negative effect on firms’ abilities to finance their investment.”

A ‘Simple and Intuitive’ Idea

The research used nearly 100 years of data from firms listed on the major U.S. stock exchanges, focusing on non-financial firms in unregulated industries. The researchers found that an increase in government debt of a given amount caused a decrease in corporate debt about a third as large. The effect was concentrated in long-term debt, rather than short-term.

The work also found that firms do not increase their stock issuance to make up for their lower debt levels during times when government debt is high. New stock issues come with a price, such as diluting the value of pre-existing shares, so firms can be reluctant to simply turn to the equity markets when debt becomes less attractive, Roberts says. As a result, corporate investment falls when government debt issuance rises.

The interplay between government debt and corporate policies is not the same for all companies.

“We find that the debt and leverage policies of larger, more creditworthy firms are more sensitive to variation in government debt than are the policies of smaller, less creditworthy firms whose debt is a more distant substitute for Treasuries,” Roberts and his colleagues write. Risks and returns on high-quality corporate debt are similar to those of Treasury securities, making them easy substitutes. But investors are attracted to lower-quality corporate debt for different reasons, pursuing higher yields even if accompanied by more risk, so low-quality corporate debt is not an easy alternative to government debt.

A Demand for ‘Safe’ Assets

“These results suggest that the supply of safe assets from non-financial institutions has become increasingly important over time for fulfilling excess demand due to variation in the supply of Treasuries,” the authors write, adding that “the increase in foreign holdings of U.S. Treasuries appears to have led to increased competition for safe assets, making alternative sources of these assets more appealing.”

Because a rise in government debt causes a decline in corporate debt, corporations respond by holding more cash and other types of short-term liquid assets such as Treasuries, the authors find. During these periods of higher government debt, the cost of issuing corporate bonds rises, making it more attractive to hold onto cash and other liquid assets. Firms are less likely under these conditions to make long-term investments.

“We show that government debt plays an important role in shaping corporate behavior,” the authors write. “Increases in the supply of Treasuries alter relative asset prices such that corporations reduce their debt issuance and investment in long-lived assets. The result is a decrease in corporate leverage and shift in the composition of assets toward short-term, liquid assets.”

Still, he adds, the findings should be of interest to corporate executives and investors, who may see corporate performance diminish during periods of high government borrowing. And, he concludes, a broader study might provide new insights into the ways that government borrowing affects other parts of the economy as well.

“If we’re impacting the corporate sector this way, what is happening to households?” he asks. “What’s happening to financial intermediaries?”